Cloudy With A Chance Of Meatballs 2 Review 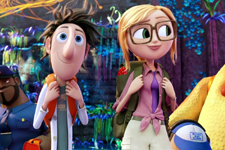 Kritika Deval / fullhyd.com
EDITOR RATING
6.5
Performances
Script
Music/Soundtrack
Visuals
6.5
5.5
8.0
8.0
Suggestions
Can watch again
Yes
Good for kids
Yes
Good for dates
Yes
Wait for OTT
No
"All my life, I never knew, what I could be, what I could do, then we were new... Ooo ooo ooo..." - and it goes on and on, the effect of an earworm leftover from the film that translates into thoroughly annoyed glares from passersby as we sing with no regard whatsoever to tune or to the sensitivity of the ears of said passersby.

Cloudy With A Chance Of Meatballs Part 2 (which we will, in the tradition of the film itself, call CWACOMP2 henceforth), you see, leaves us no choice but to take leave of anything in our nature to tend to logic of any kind. Goodbye sense and sensibility - a food-fight hurricane is calling to us, and we don't need you anymore. Arrivederci sanity, you're simply in our way. Au revoir reason, we'd rather send our marbles off on a rollicking journey of free association. A journey that begins before the beginning, at an island of giant mutant food.

No, our minds are not completely scrambled. Or, if they are, the reason is living food and endless puns thereof that we won't deprive you the joy of experiencing firsthand by mentioning here.

What is scrambled, though, is this nevertheless sunny-side-up tale of Flint Lockwood (Bill Hader), the inventor of zaniness. Flint has managed to put his upside-down cake of a past behind, and is now concentrating his out-of-whack brain on becoming an inventor at Live Corp, run by Chester V (Will Forte), the ultimate inventor of the times who runs a 6-month training program at the end of which he picks one "lucky" young talent to work at a company which monopolises the food bar market.

Sure of success, Flint is equally surely disappointed when he isn't selected. All is not lost, however. As he lies dejected at his home, Chester V's super-ape assistant Barb (Kristen Schaal) shows up and tells him about a super secret mission Chester has for him and him alone. If successful, Flint can fulfill all his dreams at one go. And, that's all that's there to it. Or is there?

To be honest, we didn't much care, and apparently the apparently-high-on-pot writers didn't either. Cloudy 2 is like an out-of-hand party. Things begin fine. There's enough food and booze for all. There are activities. There is room for direction. And then, someone gets an extra crate and the next thing you know you wake up on the bathroom floor with dim memories of the awesomeness that occurred last night.

All pretenses to a story are forgotten the moment the writers realize they have a chance to make fun of someone or something ??" Google, Steve Jobs, Jurassic Park and Avatar are only the icing. The cake has layers inside layers, each of it so flavorful that you forget the cake as you pick them apart.

And then there is the utter cuteness of it all! The predators in the movie include Cheeseburger Spiders and Tacodiles. There's a little talking strawberry called... well, Berry, of course. There are Apple Pie-thons and Pickles and Potato-pottomuses and the most adorable looking marshmallows!

Unless you sit through the credits, you will be forgiven for the fact that you might have mistaken the film to be a Pixar baby - Cloudy 2 is that much reminiscent of the limitless imagination in such jewels as Up and Wall-E. That it lacks coherence is a very minor setback that nevertheless exists.

The graphics are suitably adorable and eminently dynamic, the good people at Sony apparently having decided that the writers' psychedelia be replicated bit for bit. The music is constantly upbeat. Do look up the song we began with. It will bring you up out of absolutely any of life's various dumps.

The voice actors are all people who are people you can't help but expect great comedy from, although we do wish Neil Patrick Harris had more to say than "monkey!" or "banana!"

In all, Cloudy 2 is a gleaming ray of sunshine that will have you basking in it for at least the rest of the day, if not longer. Paul McCartney's upbeat voice will take over from there.
Share. Save. Connect.
Tweet
CLOUDY WITH A CHANCE... SNAPSHOT
CLOUDY WITH A CHANCE OF MEATBALLS 2 SNAPSHOT 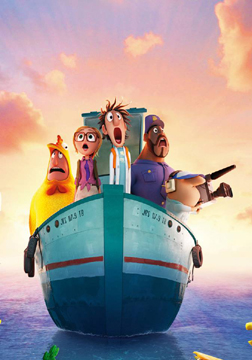 ADVERTISEMENT
This page was tagged for
Cloudy With A Chance Of Meatballs 2 english movie
Cloudy With A Chance Of Meatballs 2 reviews
release date
Bill Hader, Anna Faris
theatres list
Follow @fullhyderabad
Follow fullhyd.com on
About Hyderabad
The Hyderabad Community
Improve fullhyd.com
More
Our Other Local Guides
Our other sites
© Copyright 1999-2009 LRR Technologies (Hyderabad), Pvt Ltd. All rights reserved. fullhyd, fullhyderabad, Welcome To The Neighbourhood are trademarks of LRR Technologies (Hyderabad) Pvt Ltd. The textual, graphic, audio and audiovisual material in this site is protected by copyright law. You may not copy, distribute, or use this material except as necessary for your personal, non-commercial use. Any trademarks are the properties of their respective owners. More on Hyderabad, India. Jobs in Hyderabad.