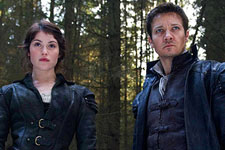 Kritika Deval / fullhyd.com
EDITOR RATING
3.0
Performances
Script
Music/Soundtrack
Visuals
5.0
2.0
2.0
4.0
Suggestions
Can watch again
No
Good for kids
No
Good for dates
No
Wait to rent it
No
Who wants to know what happened to Hansel and Gretel after they got away from the wicked candy witch? Quite a few people, actually. The way the grown-up versions of those two resourceful and brave little children have been shown in this movie, though, has you wondering if they wouldn't have been better off as witch-feed.

The first few minutes of the movie are allotted to the "flashback", the story where it all began for Hansel and Gretel (played rather mystifyingly by the gorgeous and talented Jeremy Renner and Gemma Arterton).

As it turns out, roasting one witch in the oven wasn't enough for them, and they went on a hunting spree, which results in them becoming celebs of sorts.

And, when children start going missing in a little village, the mayor calls for the siblings to save them. Which, of course, they do.

But not until after you've seen just about every possible way in which to mutilate a person (blowing up heads seems to be the makers' favorite). Sure, all that boundless blood and gore is actually fun in the beginning. And, Arterton's sass goes a long way in making the proceedings bearable. She's lovely, sexy, charming, and totally wasted on this fanfic-on-magic-mushrooms (hehe, wasted, get it?).

Hansel and Gretel, like many other products of the Brothers Grimm, is a naturally dark and twisty tale. Of course, that doesn't stop these guys from adding their own little touches. Hansel now has chronic diabetes because he was force-fed sweets when he was held captive by evil witch Muriel (Famke Janssen). Also, one stray witch there becomes a whole coven of women who look like they've forgotten to wash the face pack off.

Why the hell don't filmmakers get just how awesomely cool witches can be?!?

Attempts to contemporise include a lot of cussing, a lot of really fun-looking weapons (there's this enormous gun-cum-harpoon-cum-sword-cum-anything-you-want-it-to-be that Renner totes around that this writer spent most of the movie lusting after), and a sort of psycho-stalker-groupie.

Attempts to go period include ridiculous costumes, dingy sets, and accents that don't quite know what they are.

None of them really works, resulting in a sort of weird limbo where the stick is abandoned and everyone goes their own way.

The dialogue is mostly superfluous, and unintentionally funny on occasion (imagine a warty-butt-ugly witch yelling, "Even God knows better than to come near us." D'uh, woman. So does anyone with some notion of taste).

3D was unnecessary, and just adds to the confusion of the mess on the screen. It is so badly executed that you just end up with a mild headache.

Sure, you can watch Hansel & Gretel Witch Hunters (3D). But only in the way a Gone With The Wind fan would pick up the awful fan-written "sequel" Scarlett.

Actually, who are we kidding? There's no reason to watch this film, save for Arterton's nubile body and charisma. Even the allure of that dies a painful death upon the sight of a bloody and muddy 'stache of sorts on the actress's expressive face. 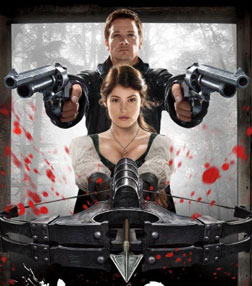 ADVERTISEMENT
This page was tagged for
Hansel & Gretel Witch Hunters (3D) english movie
Hansel & Gretel Witch Hunters (3D) reviews
release date
Jeremy Renner, Gemma Arterton
theatres list
Follow @fullhyderabad
Follow fullhyd.com on
About Hyderabad
The Hyderabad Community
Improve fullhyd.com
More
Our Other Local Guides
Our other sites
© Copyright 1999-2009 LRR Technologies (Hyderabad), Pvt Ltd. All rights reserved. fullhyd, fullhyderabad, Welcome To The Neighbourhood are trademarks of LRR Technologies (Hyderabad) Pvt Ltd. The textual, graphic, audio and audiovisual material in this site is protected by copyright law. You may not copy, distribute, or use this material except as necessary for your personal, non-commercial use. Any trademarks are the properties of their respective owners. More on Hyderabad, India. Jobs in Hyderabad.