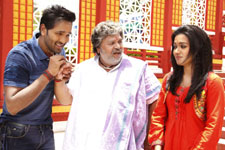 Kritika Deval / fullhyd.com
EDITOR RATING
4.0
Performances
Script
Music/Soundtrack
Visuals
6.0
4.0
5.0
6.0
Suggestions
Can watch again
No
Good for kids
No
Good for dates
No
Wait for OTT
Yes
From title to promos, Erra Bus doesn't really leave much of its premise to the imagination. If you have had any exposure to these, you must already know that it is about an elderly man, decidedly set in his rural ways, who chances to visit the Big City, and the hijinks that ensue. That this elderly man is played by so vital an elderly man as Dasari Narayana Rao, along with the fact that the film contains the improbably charming Vishnu and the winsome Catherine Tresa, along with Raghu Babu, Bramhanandam, Krishnudu and a score of others who have consistently delighted and entertained the Telugu audiences for aeons, should, by all rights, render this seeming romp at the very least tolerably amusing. Erra Bus, however, falls just short of this very unambitious mark for reasons that should become clearer as you read further.

First, the plot. Rajesh (Vishnu Manchu) is an IT professional with dollar dreams, and Raji (Catherine Tresa), his doctor inamorata, is quite ready to fall in with his US-bound plans. Everything is going swimmingly, with Rajesh's company sponsoring his transfer to the USA, when Rajesh hits upon the happy notion of inviting his grandfather, Vishnu Thathayya (Dasari Narayana Rao), to stay with him in Hyderabad. This turns out to be a very unhappy notion, as this very rural gentleman hits upon several notions of his own which set up the backs of everyone from Rajesh's neighbors to his girlfriend, and turn his ordered life topsy turvy.

These notions, incidentally, also alternate between making you cringe and yawn. You see, firstly, this film's idea of demonstrating a generation gap involves Vishnu Thathayya mistaking a Mac for a toaster. Secondly, the makers would far rather preach to you than make you laugh. Thirdly, this movie is so enamoured of the so-called rural bliss, and so prejudicial of "fast" city ways, that it renders itself ineffective with both.

It also fails to make any kind of point except that all people should stop moving and just go back to their villages, because that's what a nice person would do, apparently. Most attempts at humor are forced, with the film's use of Bramhanandam for such insipid attempts at drawing laughter being almost shameful.

Dasari Narayana Rao's and Manchu Vishnu's sincerity in their portrayals, and the whole-hearted enthusiasm with which they enter their roles, go a long way in keeping you from walking out in the middle, and the few laughs that are begotten owe thanks to the two actors' unpretentious performances, as well as that of Krishnudu, rather than to clever dialogue. Catherine Tresa looks quite pretty, but doesn't get much room to perform, just like the rest of the cast.

The screenplay is unevenly paced, with a masterful climax redeemed by Dasari's histrionics. The dialogue is cringe-worthy, with few gems to draw the whistles aimed at by a lot of lines. The camerawork and production values are just about okay, as is the music by Chakri, who seems to have gotten himself stuck in quite a rut.

Erra Bus tries very hard to be a family entertainer that also imparts values. It fails in the first aim by refining far too much on the latter. Watch it if you have little else to do, and that too at the nearest single screen.
Share. Save. Connect.
Tweet
ERRA BUS SNAPSHOT 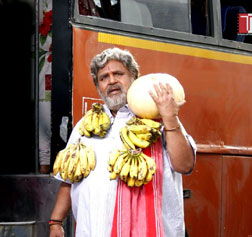 ADVERTISEMENT
This page was tagged for
Erra Bus telugu movie
Erra Bus reviews
release date
Dasari Narayana Rao, Vishnu Manchu
theatres list
Follow @fullhyderabad
Follow fullhyd.com on
About Hyderabad
The Hyderabad Community
Improve fullhyd.com
More
Our Other Local Guides
Our other sites
© Copyright 1999-2009 LRR Technologies (Hyderabad), Pvt Ltd. All rights reserved. fullhyd, fullhyderabad, Welcome To The Neighbourhood are trademarks of LRR Technologies (Hyderabad) Pvt Ltd. The textual, graphic, audio and audiovisual material in this site is protected by copyright law. You may not copy, distribute, or use this material except as necessary for your personal, non-commercial use. Any trademarks are the properties of their respective owners. More on Hyderabad, India. Jobs in Hyderabad.