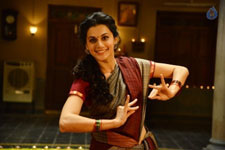 Josh / fullhyd.com
EDITOR RATING
6.0
Performances
Script
Music/Soundtrack
Visuals
7.0
6.0
6.0
6.0
Suggestions
Can watch again
No
Good for kids
No
Good for dates
Yes
Wait for OTT
Yes
We feel compelled to give you this disclaimer to not read this review if you intend to go watch Anando Brahma. Because it's this fragile film which, if you have any expectations, will shatter them. You best watch it without knowing or thinking anything about it. If however you do not intend to watch the film or you are so sure that this unassuming cute film will anyway not live up to your standards, you are welcome to continue reading, and we'll try to explain what we mean by that strange disclaimer.

Take the plot, for instance. There's a family in a house - a woman (Taapsee), an old man (Vijay Chandar), a kid and a house-help. They start seeing ghosts. And that's it. We can't tell you any further. Because the story takes a twist right there, and to discuss the plot would be to give away the twist. Not that the twist (and the other plot devices) are genius material, but they do actually entertain if you aren't expecting them.

Say what you want against the horror-comedy genre films, there's one good that comes out of them - they try to have a story. It's a whole different issue that the story may not be great or well worked, but it's still a welcome change from the mass template of hero getting his way with the villain. Raju Gari Gadhi had a story with organ harvesting as the backdrop whereas Dora had the ghost of a dog haunt a car. These things are interesting simply by existing as plots in an film space where writers squeeze their last drop of creative juice into lines that propel the hero's ego out of the earth's atmosphere.

Anando Brahma, furnished with a decent plot and a good-ish script, gets the benefit of a director (Mahi V Raghav) who likes to invest in the small things. He gives his characters quirky traits but makes sure to draw from them well after the first joke is over. He reveals more and more with time, and often the revelations are contrived, but the timing works. You feel that little sliver of surprise when a new plot device, inorganically but entertainingly, makes its way into the story.

This hold on story-telling coupled with some attention to sanitised CGI, believable art direction, and effective visuals and music makes Raghav a talent that may make unambiguously good films in the future, but right now we have a film which manages to engage you if you aren't aware of it.

However, what are unambiguously good about Anando Brahma are the few stretches where it lets its comedians loose. The film belongs to Srinivas Reddy, Vennela Kishore, Shakalaka Shankar and Thagubothu Ramesh. While all of them play various versions of Brahmanandam, their success lies in the fact they don't make you miss him.

Reddy and Kishore, in particular, can begin to call themselves legitimate performers at this point of their careers. Their actions are deliberate and confident, which sets them apart from the unsure amateurish lot. While still in amateur district, Shakalaka Shankar and Thagubothu Ramesh still have tricks up their sleeve that make the crowd laugh out loud. So, yeah, you will laugh in Anando Brahma.
Share. Save. Connect.
Tweet
ANANDO BRAMHA SNAPSHOT 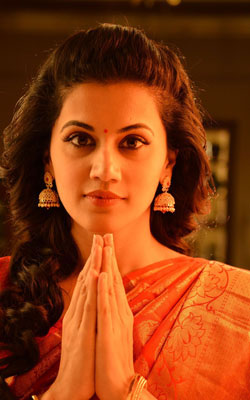 What I really like about your reviews and comments is that you really champion a movie which you like , especially the ones which may go below the radar without enough word of mouth. This is a trait I noticed in my favourite reviewer, Roger Ebert as well. Keep up the good work -)

On a different note, have you been writing before your stint with fullhyd as well?
Josh on 25th Aug 2017, 5:13pm | Permalink
I get to watch Arjun Reddy, review it, and get compared to Roger Ebert. It's turned out to be a fabulous day, Siva :)

And no, I haven't written before Fullhyd. Unless you count the long long letters I subject my friends to once in a while.
Jyothi on 18th Aug 2017, 8:24pm | Permalink
Movie Review : Anando Brahma - Lives up to its name - Happiness is divine, indeed; and in deed! One of the best horror-comedy movies ever! ????????????

There is one difference between the feelings of the living and undead - fear. The living feel it in every walk of life and the undead have none. But fear fears only one thing, laughter. Anando Brahma is full of this fear-antidote, especially the second half.

A son living in Malaysia, who fears for the safety of his parents during Uttaranchal floods, comes to his home in India only to find that they are presumed dead. He decides to sell the house, only to find that it has become a home for some ghosts. And they keep any potential buyers at bay.

What happens when four guys, in desperate need of money, offer to stay in this haunted house for three nights, forms the rest of the story. They are promised a bounty if they can prove that ghosts do not exist.

Each of the four guys are atypical characters, one has a weak heart, one is a wannabe actor, one is physically impaired and the last one is a drunkard, after 9 pm. Comedy knows no bounds when they all come face to face with the ghosts. It is a laughter riot and I strongly encourage everyone to watch it.

Every actor gave their best, but Vennela Kishore and Shakalaka Shankar stood out. Srinivas Reddy was awesome too. Screenplay was taut and visuals were stylish and eye-friendly. Writer and Director deserve a hat tip!!

ADVERTISEMENT
This page was tagged for
Anando Bramha telugu movie
Anando Bramha reviews
release date
Srinivas Reddy, Taapsee Pannu
theatres list
Follow @fullhyderabad
Follow fullhyd.com on
About Hyderabad
The Hyderabad Community
Improve fullhyd.com
More
Our Other Local Guides
Our other sites
© Copyright 1999-2009 LRR Technologies (Hyderabad), Pvt Ltd. All rights reserved. fullhyd, fullhyderabad, Welcome To The Neighbourhood are trademarks of LRR Technologies (Hyderabad) Pvt Ltd. The textual, graphic, audio and audiovisual material in this site is protected by copyright law. You may not copy, distribute, or use this material except as necessary for your personal, non-commercial use. Any trademarks are the properties of their respective owners. More on Hyderabad, India. Jobs in Hyderabad.