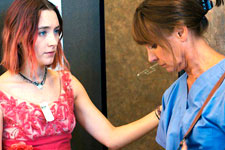 T J Reddy / fullhyd.com
EDITOR RATING
7.0
Performances
Script
Music/Soundtrack
Visuals
8.0
7.0
8.0
5.0
Suggestions
Can watch again
Yes
Good for kids
No
Good for dates
Yes
Wait for OTT
No
The jarring first scene of Lady Bird grabs your attention and quickly alleviates any fears of the movie being a run-of-the-mill high-school drama. Written and directed by the indie-rific Greta Gerwig, the film is a snapshot of the final two months of the life of Christine "Lady Bird" Macpherson (Saoirse Ronan) as a 17-year-old. The camera follows her as she applies to college, has a tense and testy relationship with her mother Marion Macpherson (Laurie Metcalf), tries to be cool in Catholic school, loses her virginity, dates boys who are awkward or pretentious or both, and so on. Like Seinfeld, this is a story about nothing and everything all at once.

Lady Bird's strength lies in its ability to engage you with the mundane. The story, its titular character and the setting of Sacramento are all extremely personal to Gerwig, and this gives the film a lived-in feel. With characters, their relationships with each other and their environment being established quite early and clearly, the movie makes an interesting narrative choice. By taking this approach, the film mostly refrains from adding too many layers to its characters, and conversely lets the viewer decide how these quickly-established people should deal with the situations they are presented with. Many of us may have tried a new hair-do or yelled at our parents or thought of jumping out of a moving car when faced with our youth's most harrowing circumstances. Lady Bird capitalizes on the assumption that most in the audience were 17 at a point in time, and goes for the raw instead of nuance. It is all the better for it.

However, while the emotions are expertly constructed, the setups that lead to the payoffs are not quite so original. What begins as a fresh take on the life of a millennial in 2002 quickly finds itself echoing sequences and plot elements from films past. These sections of the movie seem contrived simply because they are blatantly a means to an end. The script requires Lady Bird to be heartbroken from time to time lest she comes off as ungrateful. When you watch these segments in contrast to the truly gut-churningly uncomfortable moments she shares with her mother, it is quite obvious where the movie's primary source of conflict and quality lies. The wrong side of the tracks is where the film is from, and where it is most genuine.

The uniqueness doesn't end with the writer's exploration of family dynamics and personal relationships. Going hand in hand with the words on the page is the considerable acting talent of Saoirse "it took me three years to pronounce your name right" Ronan. She is one the finest young actors of our time, and her third Oscar nod at age 23 reiterates that sentiment. While Ronan's toned-down glamour is meant to make her more appealing to the "everyday" woman, it is her subtle and bombastic emoting that truly catches the eye. She started at a very high place as an actor and has only improved, except when she starred in The Host.

Veteran actor Laurie Metcalf is the yin to Ronan's yang as both their unabashedly strong personalities collide frequently and to great effect. There is something to be said about the relationship they share, and the dreams and desires they have for Lady Bird to achieve her full potential. The observation that they are the same person who are products of two different generations is barely scratching the surface when it comes to truly exploring the complex dynamic at play here. Marion's interactions with Christine play out both as the former critiquing herself and her life choices, and holding her daughter up to a standard she never managed to live up to. Again, this observation is merely a gateway.

Masterful acting is what is asked of a performer when roles with such nuance are written for them, and mastery is what is delivered.

Lucas Hedges, Timothee Chalamet and the band of high school stereotypes play their parts well, but are nothing more than what teen movies need to have to be termed as such.

But unlike in most teen films, Lady Bird's choice of music is one of a kind. Like how a movie about my youth would feature Evanescence songs till the cows came home (because I thought nu-metal was cool and deep), Lady Bird's soundtrack feels like a collection of songs Gerwig grew up on as a teen. The music and the mood it sets are specific to the setting and the time period.

The film's visual aesthetic, however, leaves a lot to be desired. There is a distinct lack of creativity in how shots and sequences are staged and framed. It is not to say the movie is poorly made - far from it. However, post the first scene and a few shots scattered in between, the film is uninspiring.

That is saddening because of how well Gerwig and her crew tie the film up. There is a lot to appreciate about those final few minutes. As we mentioned before, the movie is about nothing only until all the meaningless vacuum adds up to a crescendo of emotion. Lady Bird's acceptance and appreciation of her life as Christine, and all the good, the bad and everything in between that led her there, is poignant and imperfect.

The film, like life itself, cannot attain perfection even though it tries exceedingly hard. But the fact that its story found some originality in those of the seven billion that inhabit the world is commendable.
Share. Save. Connect.
Tweet
LADY BIRD SNAPSHOT 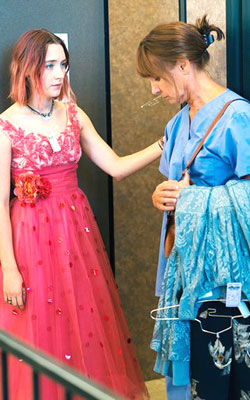 ADVERTISEMENT
This page was tagged for
Lady Bird english movie
Lady Bird reviews
release date
Saoirse Ronan, Laurie Metcalf
theatres list
Follow @fullhyderabad
Follow fullhyd.com on
About Hyderabad
The Hyderabad Community
Improve fullhyd.com
More
Our Other Local Guides
Our other sites
© Copyright 1999-2009 LRR Technologies (Hyderabad), Pvt Ltd. All rights reserved. fullhyd, fullhyderabad, Welcome To The Neighbourhood are trademarks of LRR Technologies (Hyderabad) Pvt Ltd. The textual, graphic, audio and audiovisual material in this site is protected by copyright law. You may not copy, distribute, or use this material except as necessary for your personal, non-commercial use. Any trademarks are the properties of their respective owners. More on Hyderabad, India. Jobs in Hyderabad.