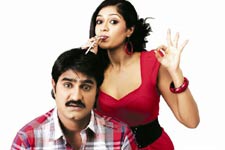 Deepa Garimella / fullhyd.com
EDITOR RATING
4.5
Performances
Script
Music/Soundtrack
Visuals
7.0
4.0
6.0
6.0
Suggestions
Can watch again
No
Good for kids
No
Good for dates
No
Wait to rent it
Yes
Any man who can get into a woman's head is automatically a superhero, remarks Lucky's protagonist. He says this with absolute passion - not in sarcasm, and not in despair, but in the manner of one who actually believes it.

You can't disagree with Lucky. Whichever sex you belong to. The question that a woman will, of course, pose is this: if men did indeed possess these superpowers, would they want to make use of them? But Lucky is a movie and all, so the picture is heart-warming.

One day, God (Goddess, technically) forces upon him a burdensome capability - he can now hear everything that any female around him is thinking. This is a gift that further frustrates Lucky. And why not? These women are all either wishing their mothers-in-law were dead or are fantasizing about men (mostly, Lucky) other than their husbands.

Until, one day, a psychiatrist (who has three dozens of candles in her room) tells him that it is a boon every man wishes to have. She tells him that he must view it as such, and exhorts him to use it to understand the fairer sex better and help whoever he can.

In his note in the beginning of the film, the director says Lucky is a tribute to women. And this is something you do not doubt, for the movie does seek to be a gentle cockle-warming comedy. Lucky's transformation from misogynist to sensitive well-wisher of the ladies is quite engaging, and Srikanth infuses it with a dignity that might have been tough to find.

Caution: there are a few areas that might be construed as being regressive if you want to take the feminist route. For example, Lucky tells his boss to reunite with her estranged husband (who had once dumped her) for the sake of her child. However, it's all portrayed rather gently, and you can see the makers trying hard to be politically correct when advocating things like these.

But take the intent out of the picture and you have a movie that is mediocre. This is the kind of film that will seem nice to you because you are looking for something nice in it, and not because it has the power to transfix you. The screenplay isn't very evolved, and there is this feel of a television serial all through. The stuff that goes on in the women's heads is portrayed as partly sleazy, and this aspect of the film isn't crafted well at all. Then, there is some "comedy" with Brahmanandam that is force-fitted into the plot.

The actors wear bad make-up and wigs, but they deliver. Thanks to Srikanth, Lucky comes across as a nice guy who is genuinely pleasant to be around. Meghana Raj, who plays his wife, has nothing to do - it is indeed her good fortune that in this role she doesn't even have to mouth her lines, for everything the lady thinks is automatically "conveyed" to her husband.

AVS is saddled with a bad hairpiece, but manages to make his vaastu-loving character at least mildly funny. Sana, Sana, oh Sana - we have no idea why they're making you play Srikanth's mom. Roja, meanwhile, makes an impact (it's a relief they didn't make her play Srikanth's mom).

The music is a pleasant surprise - the songs sung by Karthik are actually good. The visuals are about all right.

It's not an assault on your senses, and that way, Lucky is not the worst thing to be stuck in a lift with. However, exhaust all other options before venturing to this one.
Share. Save. Connect.
Tweet
LUCKY (TELUGU) SNAPSHOT 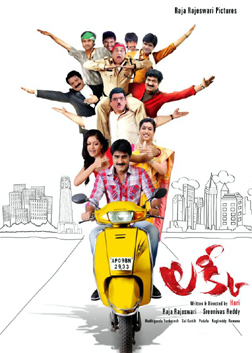 ADVERTISEMENT
This page was tagged for
telugu lucky movie
Lucky (Telugu) telugu movie
Lucky (Telugu) reviews
release date
Srikanth, Meghana Raj
Follow @fullhyderabad
Follow fullhyd.com on
About Hyderabad
The Hyderabad Community
Improve fullhyd.com
More
Our Other Local Guides
Our other sites
© Copyright 1999-2009 LRR Technologies (Hyderabad), Pvt Ltd. All rights reserved. fullhyd, fullhyderabad, Welcome To The Neighbourhood are trademarks of LRR Technologies (Hyderabad) Pvt Ltd. The textual, graphic, audio and audiovisual material in this site is protected by copyright law. You may not copy, distribute, or use this material except as necessary for your personal, non-commercial use. Any trademarks are the properties of their respective owners. More on Hyderabad, India. Jobs in Hyderabad.