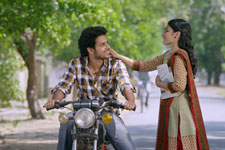 Swaroop Thotada / fullhyd.com
EDITOR RATING
5.0
Performances
Script
Music/Soundtrack
Visuals
6.0
5.0
6.0
6.0
Suggestions
Can watch again
No
Good for kids
Yes
Good for dates
Yes
Wait for OTT
Yes
The words we frequently throw around when we want to applaud films like Pittagoda are "fresh" and "refreshing". The fact that these kinds of films are rare in the swarm of mindless potboilers and star-driven commercial flicks might make us feel they are offbeat. But these films do have a formula of their own, or have unfortunately churned out one: a college drop-out hero in a triplet or quartet of self-effacing simpletons, a colony or street of everyday middle class people, a beauty next door, a handful of twists and tea-cup storms to topple their miniscule worlds, and a feel-good climax where everything eventually falls into place to reassure your faith in human relations and the beauty of ordinary life.

Pittagoda's modest ambition is to milk this template to a moderate degree while still letting its own individuality be its face. And this seemingly smart calculation robs the film of its heart. An unwavering faith in the formula would have paid off had the writing resisted its temptation for the too-deliberate cinematic feats.

Tippu (Vishwadev) is the gang leader of a quartet of vagabond youths (the rest being K S Raju, Srihan and Shiva Kumar R S) in Godavarikhani, with no aim, ambition or motivation. These lads are more or less content with their lives that never break free of their mediocrity, though everyone makes them the butt of their jokes - all the ridicule is powerless before their non-existent ego and self-esteem. But they finally decide one day to prove themselves by appearing some way or the other, in the district edition of a newspaper. Towards this, they decide to host a cricket tournament.

Into their lives comes Divya (Punarnavi Bhupalam), and Tippu develops neck-deep feelings for her. He tries to propose to her on Valentine's Day but is set back when she asks him to spell Valentine's Day. Of course, you know that she will eventually fall for him - the idea is to be entertained by the process. And Pittagoda falters here.

For a film that centers on grounded and well-defined characters, the drama they are woven into is too plastic. The movie can't think of any reasonable explanation for why Divya develops feelings for Tippu eventually. With the hero having no redeeming charm or likeability apart from being slightly good-looking, the film resorts to brewing sympathy for him by throwing in scenes where he is mistreated by his father. However, it diverts your scrutiny with some tasteful comedy and credible performances.

If this movie succeeds in anything, it is in its choice of its location. Being set in a remote village in Telangana, the film benefits from a fresh milieu, and exploits it well. The arid daily routine of these innocent lads is peppered with humour and warmth, and that redeems the film of the absence of any traceable spice. The depiction of the boys is spot on, too. Punarnavi is aptly cast, and is both authentic and effective, but she doesn't get much to bite here. The parents' characters are however too stereotyped, and are played over the top. The other supporting characters, too, are too bland to lend themselves to the environment.

The cinematography and music understand the film's simplistic approach. The songs are easy on the ears but are not likely to haunt you. All these elements are supposed to subtly glorify the middle class lives the film centers on, but somehow end up only as intriguing as its modest setting.

Pittagoda suffers primarily from a lack of conflict. It might have helped if the film was presented only as a string of events from these peoples' lives rather than as a story, as what the film passes off as a story is neither striking nor honest. Perhaps the reason that Kammula's films are never too keen on a structured plot is that he knows that the average lives of everyday people are not very accommodative of dramatic twists. Evidently, that's an important thing to keep in mind.
Share. Save. Connect.
Tweet
PITTAGODA SNAPSHOT 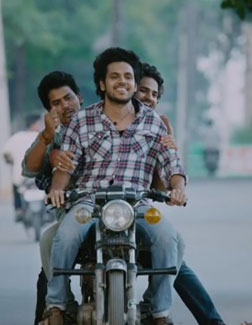 ADVERTISEMENT
This page was tagged for
Pittagoda telugu movie
Pittagoda reviews
release date
Vishwadev, Punarnavi Bhupalam
theatres list
Follow @fullhyderabad
Follow fullhyd.com on
About Hyderabad
The Hyderabad Community
Improve fullhyd.com
More
Our Other Local Guides
Our other sites
© Copyright 1999-2009 LRR Technologies (Hyderabad), Pvt Ltd. All rights reserved. fullhyd, fullhyderabad, Welcome To The Neighbourhood are trademarks of LRR Technologies (Hyderabad) Pvt Ltd. The textual, graphic, audio and audiovisual material in this site is protected by copyright law. You may not copy, distribute, or use this material except as necessary for your personal, non-commercial use. Any trademarks are the properties of their respective owners. More on Hyderabad, India. Jobs in Hyderabad.