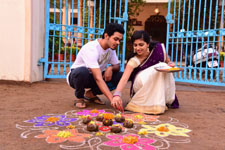 Ravi Kandala / fullhyd.com
EDITOR RATING
2.0
Performances
Script
Music/Soundtrack
Visuals
4.0
2.0
2.0
2.0
Suggestions
Can watch again
No
Good for kids
No
Good for dates
No
Wait for OTT
No
Naga Anvesh is the boy who played Venkatesh's son in Intlo Illalu Vantintlo Priyuralu - the guy who walked around in the Gorkha costume and uttered cute lines. He's apparently the son of a producer who produced a film titled Sindhura Puvvu in the early 90s. The boy is now a young man and has a craving to become a star. And Daddy Dearest decides to oblige him by producing his debut film titled Vinavayya Ramayya. The question here is this - while we understand that his dad's sensibilities lie in the '90s, what happened to Anvesh's own? And those of the director? Just what did they think would work in Vinavayya Ramayya?

The film is set in a small hamlet named Veerayyapalem. Chanti (Naga Anvesh) is a young man supposed to be doing a degree, but is actually roaming around the village without anything to do. The only thing he does is love his neighbour's daughter Janaki (Kruttika). And the neighbour happens to be the most powerful man in the village, Chowdary (Prakash Raj).

Janaki is a girl who's earned a degree, works with her father's construction business, and is generally sensible. When her Dad brings her a match, she promptly goes ahead and accepts it. At this point, Chanti suddenly turns all dramatic and asks Janaki to marry him. When she refuses, he goes about singing sad songs (straight out of movies from the early '90s). His friends, unable to see his pain, kidnap Janaki from the altar. What happens next forms the crux of Vinavayya Ramayya, and is what you've seen in a zillion other movies.

First things first - if there's an award for a movie with the most irrelevant title, Vinavayya Ramayya will win it hands down. There's no Ramu or Ramayya in this movie, and no one is listening to anything said by anyone else in the it. The film is replete with completely bizarre scenes. For example, Janaki, after being kidnapped, wakes up in a car next to Chanti, and instead of demanding to be taken home, agrees to go with him to Kerala to a friend's place until things cool down at home. Then, Chanti, accused of kidnapping Janaki, calls his mother after a few days and asks her how to make Chepala Pulusu, and makes it at a restaurant for Janaki. These are just a couple - imagine our state if we sat through such scenes for nearly two and half hours.

The emotions in the movie are totally stale, and it is quite difficult to comprehend what's happening. For nearly 90% of the movie's length Janaki keeps telling Chanti that she does not love him, but in the last 20%, falls so much for him that she stops talking to her dad for separating them. The direction department must've surely been asleep when this film was wrapped up - there's no explaining the bizarre logic here.

Anvesh needs to grow up - there's still time for him to become a hero. His diction is still that of a child artist, and seeing him pursue a girl who definitely looks older feels slightly awkward. Kruthika, who played Venky's daughter in Drusyam, appears out of place here. While she looks okay in traditional costumes, seeing her don Western dresses and do teen maar dance numbers grates. The film has a huge supporting cast, most of whom sleepwalk through their roles.

The film's budget also seems like it was from the '90s - barring the two songs shot abroad, the film looks no better than a TV serial. The music is decent, but nothing that you will remember a couple of days later.

Vinavayya Ramayya serves to remind you of only thing - Venkatesh has grown old. After all, both leads in this film have been his children in previous movies. Now that you know this, stay far away - there is nothing else to bother with here.
Share. Save. Connect.
Tweet
VINAVAYYA RAMAYYA SNAPSHOT 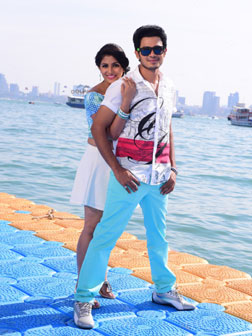 ADVERTISEMENT
This page was tagged for
vinavayya ramayya Telugu movie worldfree4u.in
Vinavayya Ramayya telugu movie
Vinavayya Ramayya reviews
release date
Naga Anvesh, Kruthika Jayakumar
Follow @fullhyderabad
Follow fullhyd.com on
About Hyderabad
The Hyderabad Community
Improve fullhyd.com
More
Our Other Local Guides
Our other sites
© Copyright 1999-2009 LRR Technologies (Hyderabad), Pvt Ltd. All rights reserved. fullhyd, fullhyderabad, Welcome To The Neighbourhood are trademarks of LRR Technologies (Hyderabad) Pvt Ltd. The textual, graphic, audio and audiovisual material in this site is protected by copyright law. You may not copy, distribute, or use this material except as necessary for your personal, non-commercial use. Any trademarks are the properties of their respective owners. More on Hyderabad, India. Jobs in Hyderabad.