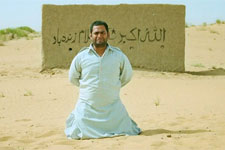 Nupur Barua / fullhyd.com
EDITOR RATING
7.0
Performances
Script
Music/Soundtrack
Visuals
8.0
5.0
6.0
7.0
Suggestions
Can watch again
Yes
Good for kids
Yes
Good for dates
Yes
Wait for OTT
No
Nitin Kakkar directed Filmistaan a while ago, but like most independent filmmakers, struggled to release his debut. He had his television career all mapped out, and this movie may have seemed like a death wish to some of his well-wishers, considering that it had neither a big banner supporting it nor a star cast. However, film festivals and word of mouth eventually led to UTV, and finally, we get to see this much talked about movie on the big screen.

Sunny Arora (Sharib Hashmi) is the average Mumbai struggling actor. He does not understand his limitations, because all that matters to him is his love for the world of cinema, and his need to make it as an actor. When all his hamming gets him nowhere, he realises that he needs to take up a job to make ends meet.

Since cinema is the only field in which he can remain himself, Sunny decides to assist an American documentary team shooting in Rajasthan. Sunny already knows his art (or so he thinks), and he wants to broaden his horizons by learning more about the craft of movie-making. This is an exciting time for him, but trouble looms right ahead.

A group of Islamic terrorists notices the Americans in Rajasthan, and plots to kidnap them in order to prove its point, and demand the release of captured comrades. This seemingly straightforward plan of action is in for a rude shock, though.

Poor Sunny is the one who actually gets kidnapped - it is so dark that the terrorists mistake the wannabe actor for an American. Since going across the border seems like a more sensible option, the terrorists sneak into Pakistan with their hostage. Imagine their surprise when they discover that not only is the kidnapped man an Indian, but he also seems quite unfazed by the ordeal.

What they do not expect is for Sunny to become an integral part of their lives. He is kept as a prisoner in a house that belongs to a particular Aftab (Innamulhaq), who is a CD smuggler - CDs of Bollywood films. Aftab and Sunny bond over their cross-border common love of the Hindi movie, and the latter becomes too prominent to ignore. To the annoyance of his kidnappers (Kumud Mishra and Gopal Datt), Sunny is endearingly popular, thanks to his obsession with the movies, and they are dumbfounded when Sunny insists on sharing his knowledge of everything cinema. In the meantime, escape is always a solution, but Sunny is too busy having fun to regain his freedom.

Filmistaan is a movie with layers, but it is also a comedy. The light-hearted approach to a serious issue - terrorism - is not a new one, but in Filmistaan, the laughs are much more credible. Here is a character who is in a soup, to put it mildly, but does not seem to understand the gravity of the situation. Instead, he finds himself teaching the terrorists and the villagers how to operate a film camera, and what one should look at while framing a shot. His ability to recite, from memory, all the dialogues and songs of a movie that has poor audio is a delightfully innovative device to lend credibility to his passion.

The point the film makes is this - that art unites all, in a way, and the shared love of Hindi movies and the stars that inhabit the film galaxy can eventually lead to a shared goal towards peace and harmony. The director believes that India and Pakistan waste too much time in maligning each other, when instead they can have a healthy rivalry over cricket matches and films. Not to mention the camaraderie that comes from a shared background. And the movie manages to put across its point without being preachy.

The only problem with the screenplay is that it takes so much effort to insert intellectual comedy that there is no space left over for logical consequences. Also, Sunny's failed attempts to escape get tedious after a point. Nevertheless, the second half, sans most of the comedy, gets engrossing, too. One does miss the completely uninhibited comedy from the first half, though.

The protagonist is as real as he can get in a Hindi movie. The audience will immediately want to protect Sunny and keep him under their wings, so the sympathy/pity factor is very high. The fact remains, however, that Sunny's story as a failed actor is a commentary on the thousands of his ilk who leave their hometowns to become somebody, and never succeed. That Sunny is able to smile through it all, never letting circumstances get him down, is a brilliant burst of optimism for many such real people. The idea, you presume, is to question the complacency and bitterness of various frustrated people across the sub-continent. You think your life is bad? Check out Sunny.

Needless to say, Sharib Hashmi is a gem of a discovery. Never has an actor played a hamming artiste so perfectly! As for his dialogues, he wrote them himself, so he is more at ease with the wit. Watch out for the scene where he dictates how his hostage video should be shot.

As for Inaamulhaq, he is the perfect co-star to Sharib Hashmi. No, this is not a bromance, but a story of true friendship, in a way, and Inaamulhaq is exactly the kind of friend you would want in any complicated situation. Gopal Datt and Kumud Mishra as the terrorists are commendable.

Rajasthan doubles up as an obscure location in Pakistan, and reminds you that the two bordering countries are almost identical in their geography, at least around the border. The colours and costumes are muted, but very realistic. The music is haunting, and the cinematographer manages to create the perfect balance between drama and comedy in his visuals. As for the editing, the second half seems to drag, but only for a while.

Nitin Kakkar's obvious love for the mother of the nation, Cine Maa, is clearly visible in Filmistaan. Watch it for several reasons, the most important being that good cinema (read: festival favourite) need not necessarily be yawn-inducing. The movie is one that you will not forget easily, and it is high time that such rare and near-flawless stories are told on the big screen.

We can assure you of one truth - there is never a dull moment in Filmistaan.
Share. Save. Connect.
Tweet
FILMISTAAN SNAPSHOT 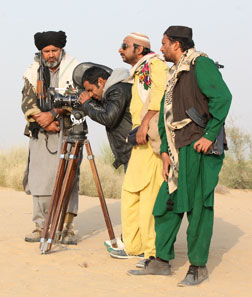 ADVERTISEMENT
This page was tagged for
Filmistaan hindi movie
Filmistaan reviews
release date
Sharib Hashmi, Innamulhaq
theatres list
Follow @fullhyderabad
Follow fullhyd.com on
About Hyderabad
The Hyderabad Community
Improve fullhyd.com
More
Our Other Local Guides
Our other sites
© Copyright 1999-2009 LRR Technologies (Hyderabad), Pvt Ltd. All rights reserved. fullhyd, fullhyderabad, Welcome To The Neighbourhood are trademarks of LRR Technologies (Hyderabad) Pvt Ltd. The textual, graphic, audio and audiovisual material in this site is protected by copyright law. You may not copy, distribute, or use this material except as necessary for your personal, non-commercial use. Any trademarks are the properties of their respective owners. More on Hyderabad, India. Jobs in Hyderabad.