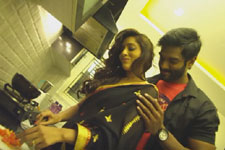 Josh / fullhyd.com
EDITOR RATING
5.0
Performances
Script
Music/Soundtrack
Visuals
5.0
7.0
6.0
4.0
Suggestions
Can watch again
No
Good for kids
No
Good for dates
Yes
Wait for OTT
Yes
A man (Charandeep) is thrown in dire straits when his beloved wife (Rashmi Gautam) is taken hostage by a mysterious and savage gang. They instruct him to follow orders which get progressively more treacherous. Should he fail to follow, his wife is faced with the prospect of being chopped to bits and flung away in the gutter.

This story, which we last watched in the 2008 Hindi flick Aamir (which itself was inspired from Filipino thriller Cavite), has always made for a nail-biting thriller. And Antham didn't feel like an exception.

Movie got done, this reviewer got out of the cinema slightly critical but rather pleased with the film, and began eavesdropping on the conversations around. And imagine our surprise when we find people passionately hating the film! The talk was so negative both online and offline while we were dutifully composing a positive-ish review in the mind. Something seemed amiss.

Perplexed by this contrast in views, we decided to don the deerstalker hat, light a pipe, and sink into an armchair for a bout of some intense Sherlocking on this question - why all this hatred for a simple and competently made film? We have two possible explanations which we present here.

We, the Telugu film viewers, are used to a certain style of formal filmmaking so much that we only think of something as a film when it subscribes to that format. There is something clean about how we make our films. We aren't talking about the content but about the style - frame composition, editing and such. There's a certain need for propriety. An image has to look clear. And preferably well-lit. The performances (good or bad or ugly, no matter) can't be too casual. The actors have to be aware that they are in a movie and have to act with that fact in mind.

However, director G S S P Kalyan's work is what would be called Indie filmmaking in some parts of the world. We can think of it as informal filmmaking. Where the maker has practically no budget and so scrapes out every last resource to put together something that looks like a movie.

To illustrate our point, we must bring your attention to the fact that he handles eight departments in the film (story, screenplay, direction, cinematography, editing, vfx, sound mixing, di colorist, producer). Often, in cases like these where a single guy takes up a bunch of departments, what you get is an elaborate ego trip of a delusional bloke. Like that pompous uncle who insists on discussing his past glory while you wonder if there's a cat's whisker of a chance that you could care any less. In this case, though, it looks more like Kalyan was just trying to save money by not hiring many people.

So the filmmaking gets a bit dirty. The images are grainy (must have been a camera that you and I could have bought if we save up carefully for a few months). The performances are too damn casual. They aren't acting badly - they just don't seem to think that they're in an actual movie. The score seems stuck on the film as an after-thought (it is an after-thought in most films - it's just that you just notice it here). You can, not incorrectly, call this filthy filmmaking.

But the thing is if you are exposed to this style already, whether it is via the short films all over YouTube or marathon viewings in jam-packed film festivals (we mean schedules, not halls) or any other source, and when you've seen enough of these films, you just accept it as a certain style. Kalyan's style is pretty much that - tell the story with as little money as possible. But tell it well.

And he does that. He knows how to create tension. He uses curious artefacts in his frames (Charandeep's car whizzes past a flickering communist party flag at one time and a rundown auto at another). His actors are not winning awards but they never fall out of character (Charandeep in particular suits his role well, and Sudarshan is quite funny). His script, even if you know how the story's going to play out, has enough interesting detail to interest you in this version of the story.

Kalyan's film is a better-told story than many of our big releases can claim to be. At any rate, there is something satisfying about watching a passionate and talented guy get to make his own film. But none of that is going to matter if the technical quality (or lack thereof) is going to put you off. You might even question the very status of the work as an actual film.

The promotion for the film is as misleading as it gets. It promises a Rashmi Gautam-starring B-grade fest. Which the film is anything but. Yes, she does wear all those transparent chiffon sarees with sleeveless blouses but that's only for a song (a strange remix of the 90s' ballad Ee Velalo Neevu). Her net share of the runtime is less than 25%, and after 10 minutes into the movie the film coolly enters the thriller domain without a trace of whatever it is that Rashmi Gautam fans look for.

So you have your hall full of men of various ages waiting for their latest object of affection to stimulate them, and what they get instead is a tall bearded man driving an SUV with a joker next to him. We don't think any of these men was particularly amused.

Antham, thus, cleaves its audience into three sections. One section wouldn't want to touch it with a barge pole. They're bound to perceive it as crude amateurish work which is not worth their time. Another one would feel betrayed by the deficit of titillation. The last (and quite minor) section of the audience is likely to find it enjoyable and even warrant multiple viewings. We urge you to contemplate on which of these sections you belong to before you make that trip to the hall.
Share. Save. Connect.
Tweet
ANTHAM SNAPSHOT 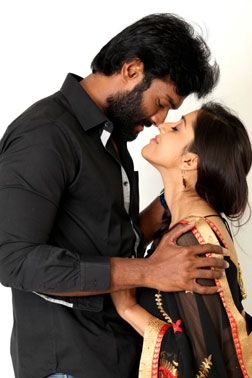 See Antham full details
ANTHAM USER REVIEWS
1 - 1 OF 1 COMMENTS
POSITIVE  |  NEGATIVE |  NEWEST  |  OLDEST  |  MOST HELPFUL  |  LEAST HELPFUL
chaitu on 13th Jul 2016, 5:57am | Permalink
Probably d only positive review on net for this movie! came here expecting another one-star review with hilarious drubbing of the movie. and then i was shocked seeing d script rated 7. for a while i thought this was a satirical review.

ADVERTISEMENT
This page was tagged for
Antham telugu movie
Antham reviews
release date
Charandeep, Rashmi Gautam
theatres list
Follow @fullhyderabad
Follow fullhyd.com on
About Hyderabad
The Hyderabad Community
Improve fullhyd.com
More
Our Other Local Guides
Our other sites
© Copyright 1999-2009 LRR Technologies (Hyderabad), Pvt Ltd. All rights reserved. fullhyd, fullhyderabad, Welcome To The Neighbourhood are trademarks of LRR Technologies (Hyderabad) Pvt Ltd. The textual, graphic, audio and audiovisual material in this site is protected by copyright law. You may not copy, distribute, or use this material except as necessary for your personal, non-commercial use. Any trademarks are the properties of their respective owners. More on Hyderabad, India. Jobs in Hyderabad.