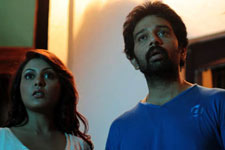 Nupur Barua / fullhyd.com
EDITOR RATING
5.0
Performances
Script
Music/Soundtrack
Visuals
6.0
3.0
5.0
7.0
Suggestions
Can watch again
No
Good for kids
No
Good for dates
Yes
Wait to rent it
Yes
It has been almost a decade since Bhoot - a period that saw the once-genius Ram Gopal Varma go stubbornly through a self-destructive phase that cost him friends, well-wishers, fans and sanity - and the man is back with a sequel to the afore-mentioned movie that redefined the status of the horror genre. Only, it is not a sequel in the true sense of the word - Bhoot Returns has nothing in common with the original, except the director, and the characters of a disbelieving husband and an easily-scared wife.

A narrator tells you, as you settle into your seats and fix the 3D glasses firmly on your nose, that ghosts somehow prefer, quite unreasonably, to haunt some houses more than others. The credits then play out against a backdrop conversation that goes somewhat like this:

Man who lives abroad (to broker): You idiot, where are the tenants that live in my house? They have not paid the rent, etc.
Broker: Sorry, sir. I will find out immediately.
(A few telephone bells, doorbells, and knocks later)
Broker (to man who lives abroad): Your tenants have disappeared.
Man who lives abroad: Oh? Hmmm. Get me another tenant, you idiot.

With the mystery of the missing tenants left abruptly unsolved, we are told that a family has moved into the house. The kids do not go to school, nor do they have any friends, so they spend all their time playing video games (in the case of the young son), or having bizarre mood swings and one-sided conversations with imaginary friends (in the case of the daughter). The husband's photographer sister decides to spend her vacation with the family, and pretty soon, the adults realise that something is seriously wrong with the little girl, and that somebody knocks frantically on their front door every night.

Being the anti-social unit that the family is, none of the members speaks to anybody else about the odd stuff that is happening around them. Instead, they spend most nights wandering around the house in the dark, trying to find clues, but come daylight, and they promptly refrain from carrying out further investigation (except on one occasion, when they decide to call a child psychiatrist to find out why the little girl is so weird).

In the wise (albeit grammatically incorrect) words of the lead actor, J D Chakravarthy, in a recent interview, "The film is certainly not out of the box or has the kind of story which has never been before." Clichés, though not abundant, still crop up now and then, but the problem is that the screenplay seems a bit immature, and is almost stagnant. From the time they family moves in, till the climax, nothing much happens (except the late-night explorations). One thing does not lead to another, so most sequences look like they are repetitions of previous sequences.

Worse, none of the mysterious events is ever solved - bringing up potentially interesting incidents to whet curiosity and then not resolving issues seems a bit unfair to the audience.

In what seems to be an almost defiant gesture, Ram Gopal Varma exploits the 3D technology to its maximum potential. Most of the action in a frame takes place in the background - the foreground has objects of varying shapes, sizes and utilities placed in the director's now-famous low angles (thankfully, the camera does not move all over the place, nor are negative spaces too prominent).

In some sequences, objects are suddenly inserted into the foreground (like a coffee cup, or the hand of the person in the foreground). Over-the-shoulder shots are a bit jarring, in terms of composition. All of these are useful tools for a movie that intends to scare you enough to make you crush your Styrofoam cup of preferred beverage, but (a) it is overdone and therefore distracts from the content, and (b) it seems a little too gimmicky and predictable after a point, especially when there is not enough in the screenplay to give you sleepless nights. Meanwhile, watch out for the part where the servant is watering the plants with a hose.

Sandeep Chowta, known for his background music, is not much in his element. The score is loud, but it is the long phases of silence that may just scare you a bit. Production design is a little gaudy, and the house that the film was shot in could have been done up better to seem more like a suspiciously inauspicious place to live in.

Both J D Chakravarthy and Manisha Koirala are in the limelight after a long hiatus (at least, in a Hindi film). They are sincere in their portrayals, and despite some unintentional hamming, they make their characters believable. Madhu Shalini, as the sister, overacts most of the time. The actor who plays the son is underused. Alayana Sharma, who plays the daughter, is effectively scary (although why she insists on calling her father "Daaddi" is unexplained). In related news, Alayana's parents are suing RGV after she freaked out and started palpitating when she saw herself on screen.

In conclusion, more wisdom from J D Chakravarthy - "Ramuji has his own idea of scaring people, and he has massively succeeded in doing that". True. If you want a bit of jumping-out-of-your-skin experience, Bhoot Returns delivers. Do not expect answers, conclusions, or logic, and the movie may just be the best way to beat the heat this weekend, or even better, the perfect excuse to cling to your date in the theatre.
Share. Save. Connect.
Tweet
BHOOT RETURNS SNAPSHOT 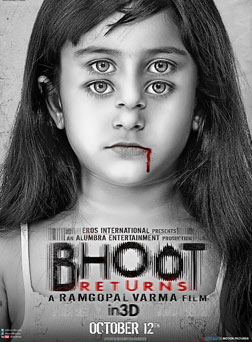 ADVERTISEMENT
This page was tagged for
Bhoot Returns hindi movie
Bhoot Returns reviews
release date
J D Chakravarthy, Manisha Koirala
theatres list
Follow @fullhyderabad
Follow fullhyd.com on
About Hyderabad
The Hyderabad Community
Improve fullhyd.com
More
Our Other Local Guides
Our other sites
© Copyright 1999-2009 LRR Technologies (Hyderabad), Pvt Ltd. All rights reserved. fullhyd, fullhyderabad, Welcome To The Neighbourhood are trademarks of LRR Technologies (Hyderabad) Pvt Ltd. The textual, graphic, audio and audiovisual material in this site is protected by copyright law. You may not copy, distribute, or use this material except as necessary for your personal, non-commercial use. Any trademarks are the properties of their respective owners. More on Hyderabad, India. Jobs in Hyderabad.