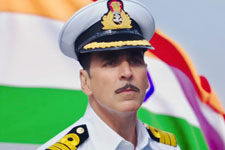 Jaiwantika Dutta-Dhupkar / fullhyd.com
EDITOR RATING
4.0
Performances
Script
Music/Soundtrack
Visuals
4.0
3.0
7.0
7.0
Suggestions
Can watch again
No
Good for kids
No
Good for dates
No
Wait for OTT
Yes
Rustom is primarily a film that thumbs its nose at the Indian judiciary, and at the armed forces, for some silly, incomprehensible reason. It also thumbs its nose at sacrosanct relationships, offers some cheap titillation, and then moralizes so much that your pants freeze to your seat.

The film's promotions claimed that it was inspired by the sensational Nanavati murder case. Beyond the uniform and the love-triangle, however, there really isn't much similarity to either reality or history. The film, in fact, produces a disclaimer saying that it's purely a work of fiction - and that's one of the only few nice things about it.

The story shows Commander Rustom Pavri being cheated upon by his pretty wife Cynthia (Illeana) and civilian businessman friend Vikram Makhija. Preeti Makhija (Esha Gupta) is Vikram's sister and Cynthia's friend, and the catalyst that makes this adultery possible. Later, she adds drama to courtroom scenes when she's out to avenge her brother's death.

Commander Pavri once returns early from a trip, discovers the love affair, and shoots Vikram dead. He then contaminates the crime scene and pleads not guilty in court. How he comes out clean and proves Vikram "deserved to die" is the crux of this rather fetid story. To add insult to injury, he also blackmails the Navy into paying him a lot of taxpayers' money. Eventually he walks free from the courtroom, a hero and much-married to wife Cynthia.

Halfway through Rustom, you begins to wonder what the movie is all about. The love story it starts off as is quickly abandoned, one debonair lover-boy lies dead and the other is in jail, and the film changes track and becomes a rather boring treatise on Corruption In The Armed Forces. It also starts revolves around the concept of what "deserving" means - and it's terribly interpreted.

Even assuming you're okay with the drifting of the theme, there's the stances - according to the film, death is a fine punishment for adultery. Why? Rustom's logic is that Navy code forbids officers from adultery within the ranks. But then there's the part where he swindles corrupt Navy officers, the logic being that they're corrupt anyway, so swindling them is like being Robin Hood.

There are also some truly inexplicable scenes in Rustom, like one where Rustom is shown sitting in jail in full ceremonial uniform. There are unnecessary allusions and too many liberties are taken with the uniform. Many "creative" people have an opinion on how the armed forces ought to function, and so a suggestion in the same vein would be to drop such folks (with their cameras and all) unprotected someplace on the border where they can feel some real heat.

Then there's one scene where Rustom disobeys orders given to him by a commanding officer in court, and many pains are taken to show how corrupt the armed forces are. Notice carefully, however, and the film reflects less on local corruption and more on foreign investment - particularly 100% FDI in the film industry.

The investigation and court scenes in the film are a riot. Esha Gupta wandering onto crime scenes only to be told that she's "contaminating" them or speaking out-of- turn in court only to be reprimanded by the judge for "contempt of court", reflect a juvenile fetish with female human body parts. Sit the director down and make him write the "offending" word five-thousand times to help him get used to biology, maybe?

The scenes which show the jury squabbling are probably meant to prove what a "buzz" the case had generated, but they lack focus. And there's a whole line-up of "bais" - bearers and man-servants - making much noise as witnesses in court. Which is not such a bad thing when you come to think of it - they all add their tuppence's worth to the legalese.

To add to its narrative flaws, Rustom is also miscast. As the film progresses, it grows on you that Akshay Kumar as Commander Rustom Pavri is not convincing enough - he walks and talks smart, but is a far cry from appearing either like a naval officer or like a Parsi. Arjun Bajwa as Vikram Makhija doesn't seem much like the high-flying playboy he is supposed to enact. And the girls both seem to suffer from Bollywood's chronic "the virgin vs. the vamp" syndrome - Illeana as Cynthia Pavri is ho-hum and lacks spark, and Esha Gupta as Preeti Makhija is sultry, lacks emotion and seems from a later time. In fact, all the characters have poorly-etched roles.

Indeed, Rustom would have been so much more fun if Illeana was her hotter self - she's terribly boring in this film. The only hot scene in the entire movie is one homo-erotic one where Rustom rolls about with Vikram before shooting him dead. The film would have been awesome if it had great bodies, bad sex and some attitude, but instead it's this weird animal where people say boring things to each other and cavort about in funny costumes. As an affair, the Vikram Makhija - Cynthia Pavri fling was totally not worth getting worked up about - on a scale of 1 to 10, it would be a 2.

The film has an impressive line-up of music directors including Arko Mukherjee, Raghav Sachar, Jeet Ganguly and Ankit Tiwari. The music is retro-style, is pleasing to the ear and suits the film. Santhosh Thundyil's cinematography is impressive - there are some fine shots of Rustom smashing things in his house, dancing with Illeana at a birthday party and some crowd scenes that come to mind. The writing (Vipul K Rawal) and direction (Tinu Suresh Desai), however, are the primary culprits.

Ultimately, Rustom the film vs Rustom the hype are two very different monsters. Stay away from this one.
Share. Save. Connect.
Tweet
RUSTOM SNAPSHOT 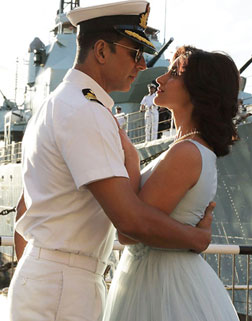 See Rustom full details
RUSTOM USER REVIEWS
1 - 1 OF 1 COMMENTS
POSITIVE  |  NEGATIVE |  NEWEST  |  OLDEST  |  MOST HELPFUL  |  LEAST HELPFUL
Kanye on 14th Aug 2016, 6:37am | Permalink
Planned on watching the movie soon but I changed my mind after reading the whole bit about the film's potential to be more sexier.

ADVERTISEMENT
This page was tagged for
rustom hindi movie
Rustom hindi movie
Rustom reviews
release date
Akshay Kumar, Ileana D'Souza
Follow @fullhyderabad
Follow fullhyd.com on
About Hyderabad
The Hyderabad Community
Improve fullhyd.com
More
Our Other Local Guides
Our other sites
© Copyright 1999-2009 LRR Technologies (Hyderabad), Pvt Ltd. All rights reserved. fullhyd, fullhyderabad, Welcome To The Neighbourhood are trademarks of LRR Technologies (Hyderabad) Pvt Ltd. The textual, graphic, audio and audiovisual material in this site is protected by copyright law. You may not copy, distribute, or use this material except as necessary for your personal, non-commercial use. Any trademarks are the properties of their respective owners. More on Hyderabad, India. Jobs in Hyderabad.