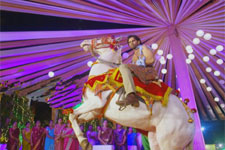 Ravi Kandala / fullhyd.com
EDITOR RATING
2.0
Performances
Script
Music/Soundtrack
Visuals
5.0
1.0
3.0
7.0
Suggestions
Can watch again
No
Good for kids
No
Good for dates
No
Wait for OTT
No
Tollywood has never done well with narratives that play out over the span of a day or a night. What are supposed to be breathless movies with events unfolding thick and fast turn out to be boring and unending sagas with unnecessary songs and unwanted comedy tracks. Thikka plays out exactly like that.

The film is about a young man Aditya (Sai Dharam Tej) who falls in love with Anjali (Larissa Bonesi). He gives up drinking, smoking, friends and all things dear to him for her. Finally, though, she leaves him and walks away deciding to get married to someone of her father's choice. Aditya and his friends go on a drunken spree and create havoc all around the city in that stupor. Meanwhile, Aditya's dad (Rajendra Prasad) escapes from the rehab centre he's in along with his girlfriend Kamala.

Thikka shows how the paths of all these characters cross and how Aditya finally reunites with his girlfriend. And all the events in the film (except the flashback which is shown over a song) happen in a single day and night. A promising theme, indeed - except, Suneel Reddy, who directed the listless Om 3D earlier, comes back with an even more clueless screenplay with Thikka.

The film starts off with a major crime scene, gives us two back-to-back songs with hardly two scenes in between, and then promptly descends into chaos. About a zillion characters come into the movie at regular intervals, and all of them are quirky in one manner or the other. The quirks are supposed to be for laughs but end up being debilitatingly tedious. Scenes like the one where a goon threatens to rape the heroine and finds his battery getting discharged at the last moment are far from funny and are far too frequent in the film. The first half runs for an hour and half, and seems interminably long - only until the second half begins. This one runs for about an hour but seems to go on for centuries.

Sai Dharam Tej carries the film on his shoulders - this is one earnest young man, but the movie does him no justice. The heroines are complete letdowns: Larissa Bonesi has no clue what she's doing in the movie, and does not even look great, and Mannara Chopra has had her day in the limelight with Jakkanna and this one - if anyone else casts her, we'd like to see what they look like. Mumaith Khan is completely underused in a scene or two. Ali gets some absolutely hideous makeup - it's hard to believe the director actually saw the final output and let it through. There are a host of other actors including Rajendra Prasad who are criminally wasted.

The film is shot well and the producers have clearly spent a lot of money on the movie, but it is all down the drain. Thaman puts his heart and soul into the music, but you will forget the songs pretty quickly.

Thikka is absolute Thikka. The statutory warning about alcohol and smoking that plays out at the beginning of the movie is an absolute irony - the characters in the film drink all the time and only drive when they are drunk. Our statutory recommendation - go watch Pellichoopulu again. 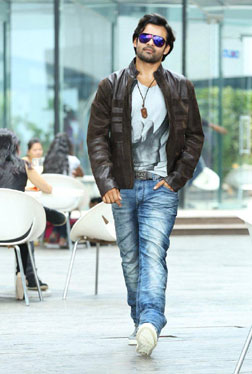 See Thikka full details
THIKKA USER REVIEWS
1 - 2 OF 2 COMMENTS
POSITIVE  |  NEGATIVE |  NEWEST  |  OLDEST  |  MOST HELPFUL  |  LEAST HELPFUL
Bhargav on 22nd Aug 2016, 8:36am | Permalink
The way tollywood movies are heading, reviewers might need counseling after watching movies like this just police officers go through after an encounter has happened. While all other south Indian film industries are doing so good we are going in just the opposite direction
Anon on 16th Aug 2016, 3:20am | Permalink
Sometimes when a review is that negative, it makes me curious to watch the movie.

ADVERTISEMENT
This page was tagged for
Thikka telugu movie
Thikka reviews
release date
Sai Dharam Tej, Larissa Bonesi
theatres list
Follow @fullhyderabad
Follow fullhyd.com on
About Hyderabad
The Hyderabad Community
Improve fullhyd.com
More
Our Other Local Guides
Our other sites
© Copyright 1999-2009 LRR Technologies (Hyderabad), Pvt Ltd. All rights reserved. fullhyd, fullhyderabad, Welcome To The Neighbourhood are trademarks of LRR Technologies (Hyderabad) Pvt Ltd. The textual, graphic, audio and audiovisual material in this site is protected by copyright law. You may not copy, distribute, or use this material except as necessary for your personal, non-commercial use. Any trademarks are the properties of their respective owners. More on Hyderabad, India. Jobs in Hyderabad.