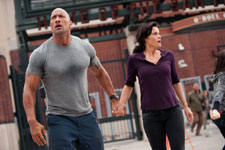 Nupur Barua / fullhyd.com
EDITOR RATING
5.0
Performances
Script
Music/Soundtrack
Visuals
6.0
3.0
6.0
9.0
Suggestions
Can watch again
No
Good for kids
No
Good for dates
Yes
Wait to rent it
Yes
After the terrible series of earthquakes that have paralysed Nepal, and with reports of an earthquake in Japan this weekend, life seems pretty fragile. The release of a disaster movie, with earthquakes galore, could not then have come at a more appropriate time. It is a coincidence, of course, since the movie's release date was fixed way before the disasters in Nepal, but it might just be that the tragedies turn out to be good news for the filmmakers since the relevance of the topic is sufficient to buy a ticket. However, San Andreas is not a great movie.

Life is not easy for the Los Angeles Fire Department helicopter-rescue pilot Chief Ray Gaines (Dwayne Johnson). He is recently divorced, and it is an emotional time for his daughter Blake (Alexandra Daddario), and he has promised her a weekend at San Francisco. His ex-wife, Emma (Carla Gugino), already has a new boyfriend, Daniel (Ioan Gruffudd), but she has not yet told Ray that she plans to make this a serious commitment.

Lawrence Hayes (Paul Giamatti) is a renowned seismologist at CalTech. When his colleague is unfortunately killed in an earthquake near Hoover Dam, he realises that he has to study the San Andreas Fault Line. Ray is called away on rescue operations, and a disappointed Blake agrees to go to San Francisco with Daniel instead.

When Los Angeles experiences the quake, Emma is trapped in a building that is fast collapsing, but Ray saves her just in time. Unknown to them, Blake is trapped in San Francisco, but alive, thanks to her new friends, brothers Ben (Hugh Johnstone-Burt) and Ollie (Art Parkinson) - and no thanks to Daniel, who has abandoned her.

Even as Lawrence tries to warn citizens of future quakes and the damage that the aftershocks can create, Emma and Ray rush to San Francisco after Blake calls them. With the earth cracked in various places, getting there by road is not going to be easy, and Ray's helicopter is already out of action. They have to make it to San Francisco before the city is destroyed by aftershocks and a possible tsunami, but nothing can prepare them for the obstacles that they must face on their way to save their only child. It seems like all the forces of nature have joined hands to make this an impossible mission, but they have to find a way as soon as possible, before they lose everything.

The San Andreas Fault, which lies between the Pacific Plate and the North American Plate, extends 810 miles into California. A team of scientists is drilling the area so that it can study the fault and predict and record future earthquakes. The last quake occurred in 2004, with a magnitude of 6. In the film, the magnitude is recorded at 9.6, making it a record of sorts. Realistically, this is not possible, since the maximum the fault can lay claim to is 8.3. Also, because the fault is mostly on land, it is not possible to create a tsunami, unlike what the movie depicts. Lawrence spends most of his time in shock, because he cannot believe all that is happening in the region, and that is the truest representation of a seismologist ever seen!

However, as far as disaster movies go, San Andreas is not entirely implausible. The devastation and the consequences may be slightly exaggerated, because this is, after all, an action movie. Also, as mentioned above, the relevance of the topic is enough for the film to garner interest and gain credibility. However, the script leaves much to be desired. An earthquake is not a strictly personal disaster - it is a shared experience. But if the makers of this movie are to be believed, nobody has it worse than Ray and his family. Discarding his responsibilities as a rescue pilot, Ray, instead of helping those around him as his designation demands, concentrates only on his near and dear ones. This raises the ethical question of how reliable and selfless a man in uniform can and should be during emergencies, though the film is not a commentary on that.

Carlton Cuse, who wrote the highly successful television series Lost, does not think it necessary to include logic in his screenplay. The structure is faultless, with Ray jumping right into the thick of things. The constant adrenaline rush is deliberate, and you may not have time to question the loopholes in the narrative. However, it does seem extremely selfish of both Ray and the writer to make you believe, as mentioned, that the survival of Ray's family is of utmost importance, and to hell with the others. You may get the feeling that the disaster is a metaphor for the rocky patch that Ray and Emma went through in their marriage, but we think it is a little too far-fetched to make sense.

The story follows a predictable curve - problem, brainstorming (for lack of a better word), solution, execution of solution, resolution. To stick to the structure, plot points are not only contrived, but unwittingly funny at times (actual humour is rare in this movie, naturally). The characters are one-dimensional in their existence and actions, and relating to them is difficult. The few emotional sequences that the movie attempts to throw at you are too convoluted, and fail to tug at your heartstrings.

Dwayne Johnson is the Rock all over again, even when he is Ray. To give him credit, he is, as always, very sincere in his depiction of a man whose loved ones are in danger. You can see that he believes in the script. Carla Gugino is no great shakes, and as Emma, she does not elicit much sympathy. Alexandra Daddario tries her best, but she has a long way to go.

Paul Giamatti and Archie Panjabi are in this movie only because they need to pay their bills, or so you'd suppose. The two talented actors become caricatures of the characters they play, but they still outshine the other cast. A brief appearance by Kylie Minogue is a surprise, but it is over too soon. Ioan Gruffurd is eye candy, and, like Giamatti and Panjabi, in this movie for reasons other than blind faith in the subject. Hugh Johnstone-Burt and Art Parkinson are a good distraction from the mayhem on screen.

There is only one word that can describe the wonder that you see on the screen in this movie - from cracks in the earth to huge waves hitting the Golden Bridge - CGI, in 3D. The cinematography gives you these stunning visuals because of the high quality of special effects used to make them believable. Add to that the action sequences, whether in a helicopter or on the ground, and you will be unable to tear your eyes away from the screen.

The production design depends largely on the CGI, of course, but you can see small touches here and there that personalize the spaces for the characters. The costumes are mostly dreary, in keeping in tune with the mood of the film. The music is suitably ominous, and the editing is sharp.

San Andreas is best watched on 3D, just to enhance the viewing. It is not the best disaster movie ever made, and neither does it have the best acting you have ever seen, but it may be worth a watch, especially if you are a doomsday prophet or a Dwayne Johnson fan. Neither of them? Then you can perhaps still go for the ludicrousness of the film - it may be a great way to spend the weekend.
Share. Save. Connect.
Tweet
SAN ANDREAS (3D) SNAPSHOT 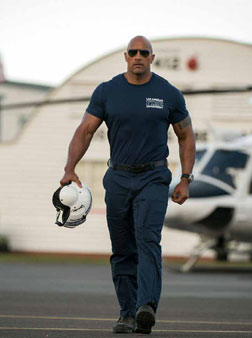 ADVERTISEMENT
This page was tagged for
San Andreas (3D) english movie
San Andreas (3D) reviews
release date
Dwayne Johnson, Carla Gugino
theatres list
Follow @fullhyderabad
Follow fullhyd.com on
About Hyderabad
The Hyderabad Community
Improve fullhyd.com
More
Our Other Local Guides
Our other sites
© Copyright 1999-2009 LRR Technologies (Hyderabad), Pvt Ltd. All rights reserved. fullhyd, fullhyderabad, Welcome To The Neighbourhood are trademarks of LRR Technologies (Hyderabad) Pvt Ltd. The textual, graphic, audio and audiovisual material in this site is protected by copyright law. You may not copy, distribute, or use this material except as necessary for your personal, non-commercial use. Any trademarks are the properties of their respective owners. More on Hyderabad, India. Jobs in Hyderabad.