Snakes On A Plane Review 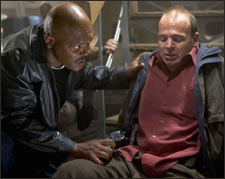 Samrat Sharma / fullhyd.com
EDITOR RATING
5.0
Performances
Script
Music/Soundtrack
Visuals
NA
NA
NA
NA
Suggestions
Can watch again
NA
Good for kids
NA
Good for dates
NA
Wait for OTT
NA
There has been tremendous buzz behind Snakes On A Plane long before it released. The hype started with people laughing incredulously at the fact that someone was actually making a film called Snakes On A Plane, and then picked up when everyone heard that Samuel “The Man” L. Jackson was to play the main lead. The title really tells everything about the film: It's called Snakes On A Plane, for goodness' sake.

Anyone who hears the title gets what the film is going to be - a bad, campy, over-the-top horror/shock film with plentiful gore and gross humor and thrills. In this sense, bad is good, camp is king, and fans of countless bad tastes horror films have reason to rejoice. So is Snakes… a good bad film? Well, let's see.

First things first – Snakes On A Plane is not in the scary business at all. There are “ew, gross” moments aplenty, but none that make you shiver with fear. Unless, of course, you're afraid of snakes to begin with. As it happens, this film has no intention of being believable either. It is content with offering you cheesy thrills and some B-movie moments, and celebrate its own ridiculousness while entertaining you at the same time.

Samuel L. Jackson, plays an FBI agent Flynn, who is deporting a witness to Los Angeles from Hawaii. A needlessly lengthy setup introduces you to the witness (Nathan Phillips), and how he saw an extremely over the top crime lord, Eddie Kim, kill someone.

Kim can obviously get into trouble if the witness reaches LA, so he hatches a plan. While in mid-flight, the plane carrying Flynn and the witness will be filled with snakes from the cargo hold, with pheromones sprinkled on them to make them aggressive. I swear, all true.

This is the dumbest plan you have heard or seen any villain hatch, and Eddie Kim now has pride-of-place in your list of stupid-plan hatching villains at the top along with Shakaal (you know, the guy who set a bunch of beagle puppies to maul Sunil Dutt – aaaaah forget it, you won't remember). I know this and you know this. But the snakes don't know this, so there's hundreds of them on the plane, and no one can do a thing now.

Except Jackson, but we'll come to him later. Director Ellis knows the cheesy legacy the name Snakes On A Plane must live up to. Without wasting any more of your time, he jumps into the B-movie mode and starts bumping off the characters one by one. A woman and a man are bitten all over their naked bodies while making love in the bathroom. A dog is eaten up by a big snake. A man is bitten where-no-man-should-ever-be-bit when he goes to the loo. A fat woman is bitten in the face repeatedly.

Visceral and gory moments like these are joined at the end of each other to serve the horror enthusiasts, and Ellis keeps upping the camp quotient with each. By the time the snakes come out in the hundreds, they are biting passengers, pilots, important machinery and causing stampedes.

This is where Jackson steps in. You can't just be a snake and bite things and get away with it while he's on board. Tazer in hand, Jackson becomes the leader of the survivors as they try to move to safe corners of the plane and avert one disaster after another. Way to bring righteous anger and furious vengeance upon those snakes, bro.

The film knows it's cheesy, and makes no pretensions as caricature characters are presented one after the other, some to die a death by snake bite, the others to live to tell the tale. If you have watched enough B horror flicks, you'll be able to tell the earnest woman, the hapless children, the annoying businessman, the airy blonde, the too-cool guy, and the videogame nerd without blinking.

This is a movie that is not tense or gripping, however. It is violent, all-out gory, horrifying in moments, but all of this in the most absurd, in your face manner. Overall, the absurdity get too much as by the time the pilot predictably dies leaving no one to land the plane, you know you are tired of the whole one-after-the-other manner in which events are laid out. The end is tiresome, and seems like a compromise to give the snake-weary audiences something different.

But as long as the thrills seem guiltily fun, the film is a blast. This is a movie that celebrates its campy humor with a trumpet in its hand, and makes sure you enjoy the ride. Ellis manages to create an ambience that is humorous and purposefully unbelievable, and then piles on as many thrills and intentionally gross moments as he can.

Is this a good bad film, then? Yes, indeed, for what is sets out to do, the film succeeds in giving a decent popcorn-muncher that can be laughed at. But by the time Jackson says that he has had enough of the [bleep] snakes on the [bleep] plane, you know that there was no way a film called Snakes On A Plane could have been a good film. Strictly for horror/creature movie fans. Do NOT take your girlfriend/parents.
Share. Save. Connect.
Tweet
SNAKES ON A PLANE SNAPSHOT

See Snakes On A Plane full details
SNAKES ON A PLANE USER REVIEWS
1 - 4 OF 4 COMMENTS
POSITIVE  |  NEGATIVE |  NEWEST  |  OLDEST  |  MOST HELPFUL  |  LEAST HELPFUL
USER RATING
3.6
6 USERS
Performances
Script
Music/Soundtrack
Visuals
NA
NA
NA
NA
Can watch again - NA
Good for kids - NA
Good for dates - NA
Wait for OTT - NA
Vijay on 22nd Nov 2006, 10:23pm | Permalink
Only movie I go to in over three months, and it had to be this! Shoulda known when this was the only one available on a Sunday at Prasads. Samuel L Jackson sure has come a long way(down) from his Pulp Fiction days.
RATING
2
Sunshine Girl on 18th Nov 2006, 10:09pm | Permalink
I did not like the movie but I must agree that I enjoyed going "ew ew ew" after every two minutes. It has its fun moments.
RATING
2
Occasional Critic on 18th Nov 2006, 10:20am | Permalink
Ah India! The perfect dumping ground for hollywood trash. Can you guess the conversation between execs at new line cinema?
RATING
2
Venkat Kishore Ryakala on 17th Nov 2006, 9:40pm | Permalink
I'm Spartacus...No. I'M spartacus...no, no..hang on,i guess i'm not..

ok the movies a blast, shout out to samuel "motha......" jackson..Do take ur girlfriend to this one though..

ADVERTISEMENT
This page was tagged for
Snakes On A Plane english movie
Snakes On A Plane reviews
release date
Samuel L. Jackson, Julianna Margulies
theatres list
Follow @fullhyderabad
Follow fullhyd.com on
About Hyderabad
The Hyderabad Community
Improve fullhyd.com
More
Our Other Local Guides
Our other sites
© Copyright 1999-2009 LRR Technologies (Hyderabad), Pvt Ltd. All rights reserved. fullhyd, fullhyderabad, Welcome To The Neighbourhood are trademarks of LRR Technologies (Hyderabad) Pvt Ltd. The textual, graphic, audio and audiovisual material in this site is protected by copyright law. You may not copy, distribute, or use this material except as necessary for your personal, non-commercial use. Any trademarks are the properties of their respective owners. More on Hyderabad, India. Jobs in Hyderabad.