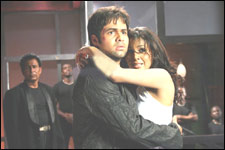 EDITOR RATING
5.0
Performances
Script
Music/Soundtrack
Visuals
NA
NA
NA
NA
Suggestions
Can watch again
NA
Good for kids
NA
Good for dates
NA
Wait for OTT
NA
The difference between a movie-scriptwriter and a member of the audience is that the writer knows, even as he is writing, that things will turn out fine in the end, and so he is not worried about the situations his characters are getting into along the way – his creativity lies in how differently he can get his characters into a harsh situation and then how he can get them out.

The viewer does not think like that – he is watching the film for the current moment. So he is upset when things are going really wrong. You keep him in that frame of mind for too long, and he will not come out glowing with praise. And your film goes downhill.

Dil Diya Hai has an innovative twist, of that there can be no doubt. However, it is very hard to swallow. It is that thing that makes an innovative script market-unfriendly. It always pays to remember that people go to the movies to escape from their lives. In fact, the very reason that most of us believe for several years after we are born that our lives will be happy and that good triumphs in the end and that things don’t ever get worse beyond a certain level is that all successful movies have portrayed the world like that.

So if you are trying to show people too much reality, they’ll go to the next candy-floss romance or all-out comedy or heavy-duty action flick where the hero is always ahead of the situation, all now showing on the next screens. Dil Diya Hai goes a long way down that dangerous path, and by the time that it decides to be normal box-office fare, it appears like it’s too late.

Neha Mehta (Geeta Basra) comes with her parents and cousin to London for a tour, and after a tiff with the tour operator Sahil (Emraan Hashmi), slowly starts falling in love with him for his composed handling of the situation and his sauve composure all through. Emraan has evolved plenty as an actor – his performance as the dignified Sahil is likely to be emulated by several youngsters, at least subconsciously.

This part of the film – the first 30 minutes or so – is well-handled. And quite a bit of it is thanks to debutant Geeta’s performance. She’s brilliant in her expressions as a girl playfully courting the purely professional Sahil, and then openly in love with him without being scared of getting hurt.

The trip ends with Sahil dropping off lovelorn Neha at Scotland and returning to London, still all formal and proper. Neha spends the night thinking up ways of proposing to him, but the morning isn’t what she expected it to be. She is kidnapped and sold off to one of the biggest brothels in all of Europe, and, already shattered, she discovers that the person who kidnapped and sold her was Sahil.

For most people, seeing young girls dreaming of a happy future being sold off into the flesh trade with its powerful mafia rulers is amongst the most repulsive and traumatic of emotional experiences. For some brief moments there, you realize that this actually happens in the world, and that there are no heroes to save them, that they get raped each day for the rest of their lives. It’s a thought you quickly want to get out of.

You know all through the film that the flesh trade has something to do with this, and for a good time, you have to see Neha in that hellhole. Geeta’s performance makes it all hurt a little more. That whole thing might work against Dil Diya Hai.

A surprise addition to the film is Mithun Chakravarthy. A romantic everyday husband who is living out a dream marriage with Kitu Gidwani. Only, he has a past, and you’re thrilled about it, for he is the only man who can take on the mafia. Yes, the one place God certainly can be found in is the movies.

Dil Diya Hai is a brave film, in the kind of theme it attempts. It also probes some emotional situations between its lead pair that you need an understanding of matters of the heart to appreciate. If the second half did not pander so shamelessly to the BO, this might have been a brilliant film – the movie unfortunately does not get into the deepest corners that its material has to offer.

The performances of the lead pair are excellent, as is, of course, that of Mithun. The music and songs by Himesh Reshammiya will be big if the film itself becomes big, which is doubtful.

Try this one if you have already watched Munnabhai 2, or can’t get tickets for it.
Share. Save. Connect.
Tweet
DIL DIYA HAI SNAPSHOT

ADVERTISEMENT
This page was tagged for
Dil Diya Hai hindi movie
Dil Diya Hai reviews
release date
Emraan Hashmi, Mithun Chakravarthy
theatres list
Follow @fullhyderabad
Follow fullhyd.com on
About Hyderabad
The Hyderabad Community
Improve fullhyd.com
More
Our Other Local Guides
Our other sites
© Copyright 1999-2009 LRR Technologies (Hyderabad), Pvt Ltd. All rights reserved. fullhyd, fullhyderabad, Welcome To The Neighbourhood are trademarks of LRR Technologies (Hyderabad) Pvt Ltd. The textual, graphic, audio and audiovisual material in this site is protected by copyright law. You may not copy, distribute, or use this material except as necessary for your personal, non-commercial use. Any trademarks are the properties of their respective owners. More on Hyderabad, India. Jobs in Hyderabad.