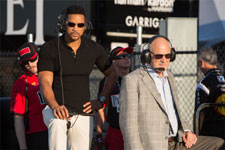 Nupur Barua / fullhyd.com
EDITOR RATING
6.0
Performances
Script
Music/Soundtrack
Visuals
7.0
5.0
6.0
6.0
Suggestions
Can watch again
Yes
Good for kids
No
Good for dates
No
Wait to rent it
No
Con movies are usually fun. The knowledge that someone, somewhere, even if it is a fictitious setting, is being made a fool of can give us a sense of superiority - since it is not us getting ripped off. And because it is a movie, you usually find yourself invested in the conman (or woman), and not the victim.

In Focus, something that the protagonist tells his disciples not to lose sight of, Nicky Spurgeon (Will Smith) is an accomplished conman. While hanging out at a nightclub, he gets to chatting with an attractive young woman, Jess (Margot Robbie). One thing leads to another and they find themselves in her bedroom. Only to be interrupted by a man who Jess says is her husband, and is in a dangerous mood. Nicky recognises this game, having played it most of his life, and he turns the situation around by telling the couple that they need to be more focused on their con instead of floundering in a situation like this. He then sends them packing.

Intrigued, Jess re-enters Nicky's life to learn more, but not before she has researched his background. Nicky becomes her mentor, and tests her worth by setting up situations to see how she fares. Soon, Jess becomes a part of his team, and his girlfriend. Nicky is not comfortable with the personal attachment, however, and after one big con, sends her away, to make her own way into the world of hustlers.

A chance meeting many years later rakes up old emotions, but Nicky is now in the middle of his biggest game yet, and Jess' boyfriend is none other than his boss Garriga (Rodrigo Santoro). There is more at stake than just their relationship, though. A long-lost father may have to reveal his identity to the world, Jess and Nicky may be killed, and Nicky himself may be playing both sides.

The first half of the movie is all about setting up the world of con artistes, giving us a glimpse into how easy it is to fool somebody provided you are dedicated and patient. It is exciting, up to a point, but then it becomes a bit repetitive. The small cons that Nicky makes Jess carry out are not etched out in detail, and so the thrill is often missing. Even their love affair is headed towards disaster, with no visible reason in sight. You get the feeling that the first half hour or so is building up to one big story, and you are proved right when the lovers separate and meet again.

Focus is not a love story - the relationship between Jess and Nicky is dependent on each one's ability to lie, and not on virtues such as honesty and kindness that one would imagine are prerequisites to a romance. The film also has its share of adventure, treachery, intrigue, espionage, unpredictability and action. The screenplay has a proper structure, but unfortunately, as mentioned earlier, nothing noteworthy takes place after the love affair begins. The inevitable betrayal comes towards the end, but the circumstances leading up to it, even when laid out, are confusing. The directors, in the process of making an intelligent movie, skipped out on a few clues here and there that would have had the audience go, "Ah! So that's why..."

There is humour, of course, but again, the effort to keep it all smart (even with the flippancy apparent in some dialogues and sequences) shows, which can make the watching of the movie a tiresome affair, at least in parts. The story essentially loses depth pretty early, and you may become impatient for it to get over as soon as possible.

Will Smith is not at his best as Nicky, but he is still the best thing about the film. He is suave and confident, just as Nicky should be, and not too intense. His sincerity is matched by Margot Robbie, who plays out her role as Jess with commendable skill. The other actors do their bit, but they lack the authenticity, and you do not really pitch for or against any of them.

The production and costume designs are average for a movie that deals with so many locations. Standard shots introduce new locales, and the cinematography is more invested in the action. The editing could have been crisper with the longer dialogue sequences, but does a decent job with the action.

Glenn Ficarra and John Requa, who have given us films such as Crazy Stupid Love and I Love You Phillip Morris, seem out of their comfort zone with Focus. The movie is worth one watch, but if you want the thrill that runs through your veins when you see a hustler getting away with it, then American Hustle is the most recent one that we can recommend. Watch Focus if you are a Will Smith fan, though.
Share. Save. Connect.
Tweet
FOCUS SNAPSHOT 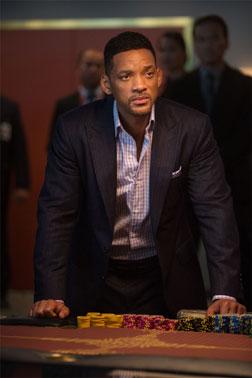 ADVERTISEMENT
This page was tagged for
Focus english movie
Focus reviews
release date
Will Smith, Margot Robbie
theatres list
Follow @fullhyderabad
Follow fullhyd.com on
About Hyderabad
The Hyderabad Community
Improve fullhyd.com
More
Our Other Local Guides
Our other sites
© Copyright 1999-2009 LRR Technologies (Hyderabad), Pvt Ltd. All rights reserved. fullhyd, fullhyderabad, Welcome To The Neighbourhood are trademarks of LRR Technologies (Hyderabad) Pvt Ltd. The textual, graphic, audio and audiovisual material in this site is protected by copyright law. You may not copy, distribute, or use this material except as necessary for your personal, non-commercial use. Any trademarks are the properties of their respective owners. More on Hyderabad, India. Jobs in Hyderabad.