War for the Planet of the Apes Review 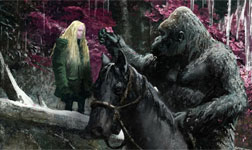 T J Reddy / fullhyd.com
EDITOR RATING
8.5
Performances
Script
Music/Soundtrack
Visuals
9.0
7.5
10.0
8.5
Suggestions
Can watch again
Yes
Good for kids
Yes
Good for dates
Yes
Wait to rent it
No
One of my most cherished movie-watching moments was being witness to Caeser's first word. When Rise Of The Planet Of The Apes made its way to theatres in the summer of 2011, most audiences (including me) had little to no expectations from it. Tim Burton's ghastly reboot of the campy '70s franchise (Ape-Raham Lincoln, NEVER FORGET) had left a nasty memory in the minds of many an audience member.

When Rise... took a wholly new approach by examining the origins of how ape-kind could physically and intellectually match and eventually overthrow mankind, I was fully on board. When Caeser's defiant "NO" boomed its way out of the cinemas' Dolby-powered sound system, every man, woman and child sat up and took notice. This was different. This was not a run-of-the-mill effects-driven summer blockbuster anymore. The franchise had morphed itself into producing the thinking man's summer movie.

Since that exchange with Tom Felton (Drako Malfloy, himself), Caeser's journey as a character has been nothing short of Shakespearean. In the one and a quarter film that followed, that rightfully-lauded primal scream, he has led a clan of smart simians, has fostered a family, has had dissension with his right hand ape Koba, has been shot at, has lost his human family (James Franco, Frieda Pinto and John Lithgow) to the virus that created him, has lost and regained the trust of his son, has saved his colony of apes from certain destruction more than once, has broken his honour code by killing a fellow ape, and done so much more.

Many blockbusters would consider the checklist complete if they adequately explored even one of those many character moments. However, the films of this rebooted Planet Of The Apes franchise are unlike most blockbusters. These are wholly character-driven stories that refuse to follow the standard norms. In War For The Planet Of The Apes, what begins as a revenge drama as Caeser goes out to even some scores with (the excellent) Woddy Harrelson's Colonel, after the latter executes the former's wife and first-born son, metamorphoses into Caeser and his cohorts having to fight for their very survival.

The praise showered on this franchise has continually been warranted. These are complex stories with equally complex characters breathing life into them. While the last film (Dawn) aped Lord Of The Flies to great effect, the parallels this film draws with The American Civil War, the current global political climate and The Bible are not accidental. The North-South divide drawn between the surviving humans, the handful of apes (retitled Donkeys) who have defected from their ape-ranks and stand shoulder to shoulder with the humans, the lashes and dearth of essential resources the enslaved apes are subject to whilst working for the humans, and Caeser's subjects turning their back on him when he chooses his agenda over the good of the collective are all stark reminders of the world we currently inhabit. Smart filmmakers weave social commentary while not being ham-fisted, and there are smart men and women behind the camera here.

The work put in by the aforementioned men and women would be all for naught if the actors portraying these characters fall flat. By now, we are well aware of this franchise's penchant for delivering riveting and relatable characters backed by nomination-worthy performances, and this film is no exception.

So Andy Serkis (the oft-lauded flag bearer of mo-cap) is in rare form yet again. Caeser is as compelling as ever, and a large chunk of that can be attributed to Serkis' mannerisms and physical acting. Caeser's doubts, rage, intelligence, leadership, flaws and (ironically) humanity are all facets explored by the film, and it's Serkis' performance that enables that.

Almost every other character is also flawlessly brought to screen, and a special mention goes to Steve Zahn's (he somehow finds his way into every movie) Bad Ape. A dark film such as this needs a comic track, and Zahn's deft handling of the material given to him while still staying in line with the overall tone of the film is truly commendable.

The long unbroken shots of action and dialogue act as an unabashed showcase of ingenuity and talent. And rarely does a film with such massive implications have a score and camerawork that complement its plot. While reviewing Spiderman Homecoming, I had mildly critiqued Michael Giacchino's score as I believed that a composer of his calibre had much more to offer than the bland and forgettable soundtrack of that film. In War..., he makes up for it, and how. From the opening studio logo to the final shot (of a sunrise), every single shot, moment, scene and sequence boasts of glorious music. The use of, for the lack of a better word, primal instruments to achieve the desired mood and tone is a masterstroke indeed.

If you had one gripe, a single solitary one, it would be the pacing. The film is oddly paced with one too many bloated scenes in its initial two acts. A tighter edit could have rendered the movie near flawless.

War For The Planet Of The Apes (and the trilogy in general) acts as a textbook combination of the effects-driven action of blockbuster cinema and the meditative story-telling of the prestige pictures of the fall season. There is a whole lot to love about this film - and about the 2017 summer movie season which is a gift that goes on and on. 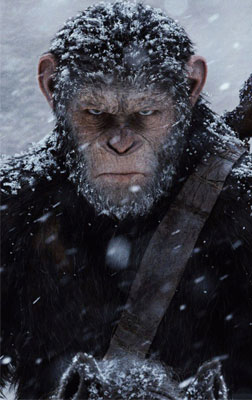 Benefits of watching all three movies back-to-back; I can give you a quick recap of the previous two movies as well :)

Rise of the Planet of the Apes - James Franco's experiments with virus 112 and 113 wipe out most of the human population in the years to come, while giving immense strength and intellect to the Ape population.

Dawn of the Planet of the Apes - What happens when utopian settling of the Apes in Muir Woods is threatened by humans and an ape consumed with hatred for humans. When survival of two species are at stake, a War must follow. And so it does ....

War for the Planet of the Apes - A fitting finale to an epic trilogy that makes you root for Apes and against humans (well, there are exceptions).

When Caesar's home and family are destroyed by a ruthless colonel, he is left with no option but one - avenge his loss. He begins his search for the colonel and what happens on this journey is the story.

Caesar is inevitably the Amarendra Baahubali of this saga. Need I say more? Andy Serkis expresses his emotions fabulously and talks with his eyes, his animated ones rather..

Woody Harrelson is menacing and scary as is needed of the colonel.

Maurice, Rocket, Luca, Nova and the 'Bad Ape' excel at their roles.

The small girl is cuteness personified and is absolutely enchanting.

I never could take my eyes of the locations and scenic captures.

All that being said, can't help but wonder if this can become an actuality. We humans have been messing with nature way too much. And Nature is bound to come back, with a vengeance.

ADVERTISEMENT
This page was tagged for
War for the Planet of the Apes english movie
War for the Planet of the Apes reviews
release date
Andy Serkis, Woody Harrelson
theatres list
Follow @fullhyderabad
Follow fullhyd.com on
About Hyderabad
The Hyderabad Community
Improve fullhyd.com
More
Our Other Local Guides
Our other sites
© Copyright 1999-2009 LRR Technologies (Hyderabad), Pvt Ltd. All rights reserved. fullhyd, fullhyderabad, Welcome To The Neighbourhood are trademarks of LRR Technologies (Hyderabad) Pvt Ltd. The textual, graphic, audio and audiovisual material in this site is protected by copyright law. You may not copy, distribute, or use this material except as necessary for your personal, non-commercial use. Any trademarks are the properties of their respective owners. More on Hyderabad, India. Jobs in Hyderabad.