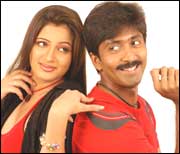 Deepa Menon / fullhyd.com
EDITOR RATING
1.0
Performances
Script
Music/Soundtrack
Visuals
NA
NA
NA
NA
Suggestions
Can watch again
NA
Good for kids
NA
Good for dates
NA
Wait for OTT
NA
When the director of Satruvu got the script in his hands, his first thoughts were undoubtedly: this story must be executed and fast. But times were hard and if he waited for a good script to show up he might as well throw himself on the railway tracks and save time. Besides, the producer seemed gung-ho about it. What the hell, he thought, let’s stuff this turkey already. And that, my friends, was how Satruvu was born. How it died is an equally riveting tale that can be witnessed at a theatre near you.

Siva’s life was never easy. As a young lad in clothes of clashing hues, he had only one desire i.e. to make it big, somewhere, somehow. We all know somebody like that. The kind of person who goes through life believing there are much, much, much greater things lying in wait for him than this hellhole he’s mistakenly been born into. It’s like he’s received a personal confirmation from Above that he’s to strike it obscenely big. So he plods through a life of mediocrity, lost in dreamy, then bitter anticipation of things to come. Well, Siva (Vadde Naveen) is like that.

Initially the universe, in all its perversity, throws everything in Siva’s lap. Including a large girl (Navneet Kaur) who dresses to save money and time. But then as the story toils forward we find out that all is not right in Siva’s world. For one thing, the large girl is engaged to an equally large mafia don by the name of Doodh Yadav. We mention the name as an indication of a fairly popular trend in the movies these days to attach the surname Yadav to any random word, in order to make it sound terrifying. Bhikshu Yadav, Kishen Yadav, Random Yadav et al.

Back to the torrid tale. The dangerous liaison with a goon’s girlfriend is not the extent of Siva’s misery. His is a story of international intrigue. When dispatched to Dubai with fake documents, he has no choice but to approach the nearest underworld nexus for a job. In his short but informative career as a sucker, Siva ends up being hunted for a murder he did not commit.

To get maximum mileage from his position as a wanted man, Siva kills half a dozen people in revenge. Escaping from the cops is not as easy as all that and it helps to have someone take the bullet for you. Siva’s brother steps up to the task. Back home, his mother and sister-in-law decide they’ve had it with this no-good idiot, whose collateral damage is higher than he’s worth. So they ignore him royally and say mean things to his face. But he is family, so they sub-let the room upstairs for his use. Aren’t families the best?

Siva now has a task before him, one that requires grit, dexterity and unusual cleverness: the bringing about of the film’s end. Cleared of his mile-long criminal record because it turned out that the people he killed were bad guys anyway, all his energies are focused on saving his family from the slimy hands of Doodh Yadav (Riza Khan). This he does with the uninterested help of the stuntman and the movie ends on a positive note. Somewhere in the middle, Meghna Naidu shows up to dance in a bar and expose masses of cellulite. As a succinct philosopher once put it: kya tho bhi hai.

ADVERTISEMENT
This page was tagged for
Satruvu telugu movie
Satruvu reviews
release date
Vadde Naveen, Navneet Kaur
theatres list
Follow @fullhyderabad
Follow fullhyd.com on
About Hyderabad
The Hyderabad Community
Improve fullhyd.com
More
Our Other Local Guides
Our other sites
© Copyright 1999-2009 LRR Technologies (Hyderabad), Pvt Ltd. All rights reserved. fullhyd, fullhyderabad, Welcome To The Neighbourhood are trademarks of LRR Technologies (Hyderabad) Pvt Ltd. The textual, graphic, audio and audiovisual material in this site is protected by copyright law. You may not copy, distribute, or use this material except as necessary for your personal, non-commercial use. Any trademarks are the properties of their respective owners. More on Hyderabad, India. Jobs in Hyderabad.