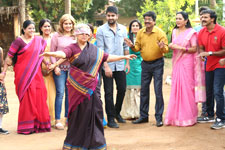 Veturi Sarma / fullhyd.com
EDITOR RATING
3.0
Performances
Script
Music/Soundtrack
Visuals
5.0
3.0
3.0
3.0
Suggestions
Can watch again
No
Good for kids
Yes
Good for dates
No
Wait for OTT
Yes
Along with love stories and hero-worshipping mass films, the family drama forms the staple of Tollywood filmmakers. It is a safe genre and comes with a certain guarantee, because who doesn't want to watch a movie where the families fall out and get estranged but ultimately unite at the end? That is what families are all about, and our makers know it well enough to revisit the family re-union themes with considerable success.

Ammammagarillu is yet another film on those lines, but cannot meet the same fate. The story opens in Pithapuram in 1998 with trouble brewing in the Sitamahalakshmi (Sumitra) household when the elder son Ravibabu (Rao Ramesh) wants to split up the family inheritance. The eldest daughter (Sudha) and her husband (Suman) are opposed to this, and it creates a rift in the family, resulting in each of the sons and daughters moving to different places leaving the grandmother alone.

After twenty years, the grandmother decides to split up the inheritance just so that all of them can be together one last time before she departs. This brings everyone back to Pithapuram, but they are all in a hurry to complete the exercise and catch the next available train/bus/flight back to their lives. And the grandson Santosh (Naga Shaurya) takes it upon himself to stop that and bring them all together.

Sundar Surya chooses his family well and creates a set of believable characters with their own issues. There is the A2 contractor, a sharp-tongued Ravibabu; a workaholic second son who neglects his family and smiling; the US-returned son who's not convinced about having kids; and the gold-loving motor mouth daughter (Hema). There is also a bava-maradalu track shoe-horned somewhere. And each of these characters is set up well (that is, if you can forgive the laughably fake blonde wig of Sandra, the US-returned son's wife).

The film's undoing is however the lack of anything gripping in the narrative. There are no impressive scenes and no entertaining comic tracks, and the romance is completely lackadaisical. An excellent example of the laziness in the scripting of this one is the makers resolving the issues of each of the characters in a single scene, and the characters promptly changing their world views and outlooks and becoming better people as if a switch were flipped. This pattern repeats itself on a loop, and gets tedious and dull all too soon.

To his credit, Surya steadfastly refuses to let his movie slip into a song and dance routine; the move however proves counter-productive here due to this episodic nature of the script. There are some well-written dialogues here and there, but Surya's film-making, like his flower-falling-from-the-deity's-photo metaphor, is in general dated.

Naga Shaurya appears earnest in the portrayal of the grandson and carries the role with ease, but the role needed a bigger star (and a better writer, in case the point is not clear yet). It's unclear what made Shamili decide to make this her first Telugu film in 5 years after Oye. Rao Ramesh hams it up every so often, but gets the important moments right. It is always a joy to watch him in these roles. Hema, Sivaji Raja and Shakalaka Shankar get the other meaty roles, and they don't disappoint. However Sumitra in the titular Ammamma role appears miscast as she frequently resorts to expressions and theatrics that don't belong in this age.

It's possible Sundar Surya gave a free rein to everybody in the team, and the film suffers for it. The music spoon-feeds every emotion into your brain till it goes numb, the shots are all over the place, the production design is inconsistent, and the movie had no business crossing two and a half hours in run-time when there are only two songs.

The film ends with S P Balasubrahmanyam in his inimitable voice enquiring if you have visited your Ammammagarillu recently, and coaxing you to do so if you haven't. That final touch by the maestro does a better job at convincing you to pay the visit than the entire 156-minute film.
Share. Save. Connect.
Tweet
AMMAMMAGARILLU SNAPSHOT 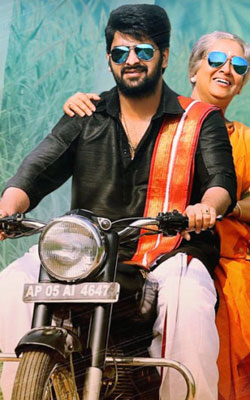 ADVERTISEMENT
This page was tagged for
Ammammagarillu telugu movie
Ammammagarillu reviews
release date
Naga Shaurya, Shamili
theatres list
Follow @fullhyderabad
Follow fullhyd.com on
About Hyderabad
The Hyderabad Community
Improve fullhyd.com
More
Our Other Local Guides
Our other sites
© Copyright 1999-2009 LRR Technologies (Hyderabad), Pvt Ltd. All rights reserved. fullhyd, fullhyderabad, Welcome To The Neighbourhood are trademarks of LRR Technologies (Hyderabad) Pvt Ltd. The textual, graphic, audio and audiovisual material in this site is protected by copyright law. You may not copy, distribute, or use this material except as necessary for your personal, non-commercial use. Any trademarks are the properties of their respective owners. More on Hyderabad, India. Jobs in Hyderabad.