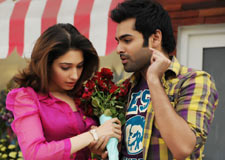 We aren't talking about the boy-girl relationship that most of our directors have by now standardized into an easy-to-download template. When romance means mystery and charm, it can be found in flights of fantasy, in weaving an alternative world, or in creating ideal characters. It follows some form of Heisenberg's Uncertainty Principle - you can suck the romance out of a fantasy by simply trying to do too much with the said fantasy.

Endukante Premanta, an otherwise beautifully-made film, is guilty of just such a folly. As something to watch and listen to, it's an awesome piece of work, thanks to some expert cinematography by Andrew, and pleasing music by G V Prakash Kumar. Plus, great comic moments, and nice chemistry between lead pair. But the idea that its makers wish to execute and floor you with falls flat, and it's also obvious that they're desperately trying to sell it hard.

It starts out as a simple story. Shravanthi (Tamannah) is the college-going daughter of the Indian Ambassador (Suman) in Paris, and is fed up of her entourage of bodyguards. She breaks free one day, when her father travels abroad.

In India, Ram (Ram) is the spoilt son of a rich industrialist (Sayaji Shinde), who's exasperated with his son's ways. Ram's father packs him off Paris, instructing him to set his life right and start earning his own money.

In Paris, Ram runs into Shravanthi, just when she's about to jump into a river. The two bond quickly, and both of them have one goal - to fly to India in 3 days. Will they make it?

The prologue, that is shown before the title sequence, is the finest part of the film. Set in the ''80s, it depicts a budding love story between a college girl and her admirer, with the woman shying away from love because she has a suffering family to take care of. It's a little story that sets high expectations from the rest of the movie, thanks to the craft with which it's been made.

The first half carries on as normally as you'd expect, and the tone of the movie here reminds you strongly of Darling (an earlier movie by this film's director). Only, Ram is an actor with skills much superior to Prabhas, and that lends Endukante Premanta a higher quality, easily.

This half is appealing to all the senses, since it is here that there's a love story brewing, some warm family comedy, and fun in Ram's escapades in Paris. It's where Europe is captured in all its glory, and songs filmed with the promise.

However, the pre-interval twist sets the stage for weirdness. The problem isn't the fantasy itself, but the laughable ways in which they try to make it "realistic". Hence, absurd heart surgeries, science-project-like graphics of blood clots in the brain, and "navigators" (GPS-enabled tracking devices) that beep to let you know where they are.

Ram and Tamannah make a good-looking and talented pair. This is a movie that belongs to hero and heroine equally, and they make the most of it. Sayaji Shinde, Suman, Raghu Babu and others deliver good scenes. Krishna Bhagawan is seen after a long time. Brahmanandam appears late into the film, to much applause by relieved watchers.

The music is a mix of peppy numbers and melodious ones, and have been shot well. There are nice creative touches - for example, the sequence in which Ram dreams up an imaginary 2-minute date with Shravanthi.

It's been a kind of waste of wonderful resources, and could have been a good entertainer. Catch it on TV when it's on.
Share. Save. Connect.
Tweet
ENDUKANTE PREMANTA SNAPSHOT 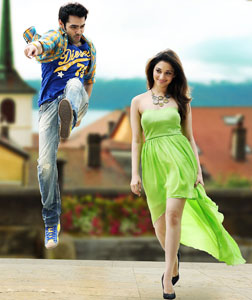 ADVERTISEMENT
This page was tagged for
Endukante Premanta telugu movie
Endukante Premanta reviews
release date
Ram, Tamannah
theatres list
Follow @fullhyderabad
Follow fullhyd.com on
About Hyderabad
The Hyderabad Community
Improve fullhyd.com
More
Our Other Local Guides
Our other sites
© Copyright 1999-2009 LRR Technologies (Hyderabad), Pvt Ltd. All rights reserved. fullhyd, fullhyderabad, Welcome To The Neighbourhood are trademarks of LRR Technologies (Hyderabad) Pvt Ltd. The textual, graphic, audio and audiovisual material in this site is protected by copyright law. You may not copy, distribute, or use this material except as necessary for your personal, non-commercial use. Any trademarks are the properties of their respective owners. More on Hyderabad, India. Jobs in Hyderabad.