All The Best (Telugu) Review 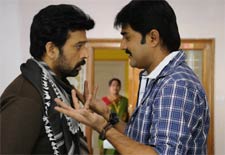 Deepa Garimella / fullhyd.com
EDITOR RATING
4.0
Performances
Script
Music/Soundtrack
Visuals
7.0
5.0
6.0
4.0
Suggestions
Can watch again
No
Good for kids
No
Good for dates
No
Wait to rent it
Yes
Maybe J D Chakravarthy wanted to do make All The Best something phenomenal but couldn't. Maybe he only chose not to make it big. Or maybe he simply wanted to do something so he wouldn't lose touch with cinema. We don't know, really.

Because All The Best, a low-rent rip-off of Bluffmaster (which itself was a rip-off of a couple of films from the west), looks like it could have been so much fun but was stopped by a parent who couldn't afford to let it. It's heart-breaking.

The story isn't entirely Bluffmaster. Chandu (JD) is a con-man, who is sought after by someone who wants to be his apprentice, Ravi (Srikanth). Ravi needs a truckload of money urgently to bail his father out of jail. Ravi quickly discovers that Chandu can't be trusted at all, and, for the next big heist, takes on the leadership role between the two.

This caper involves an underworld don Razzaq (Pradeep Rawat), who must be given some fake papers of a piece of land that KaKi (Sutti Velu) wants to sell off. Razzaq is put up at a posh hotel, where Chandu's sister works. Plenty of characters add to the setting, like Razzaq's entourage (led by Krishna Bhagawan), and a cop (Raghu Babu) who fights terrorists. Somewhere down the line, a Nithya Menen lookalike dances to one of the most awful item numbers ever.

All The Best has snatches of comic talent. For example, Raghu Babu and his sidekick recreate the whole of Hello Brother's Kota Srinivasa Rao cop sequence with the misplaced English, with good results. Some moments with Krishna Bhagawan and Telangana Sakuntala are funny - the crazy, slapstick kind of funny. There are also other situational jokes that work, but don't necessarily contribute to the film as a whole. It's a nice set of comic actors (save for Brahmanandam, who doesn't do much except call himself an atrocious name, Gochi Savitri).

J D Chakravarthy also succeeds in putting together some fine character actors to fill the scenery. We aren't just talking about Y Vijaya and Sutti Velu - the poor rickshaw-puller and the tea-stall owner are a couple of examples.

Unfortunately, the ship, as a whole, fails to move forward. You could blame it on the lazy direction and the disregard to visual quality (which alone gives All The Best a cheap feel). There's a lack of energy here, coupled with sloppy editing. In all, the story-telling has an uneven quality to it. And some sequences do not work - like that annoying one with Brahmaji, or even the whole bit with Brahmanandam.

Even though the cast is filled with comic stars, it is the lead actors who probably let the show down. Neither of them is commanding enough for you to care about the characters - it's just their conviction that carries them through. This is easily a problem with direction, and not the lack of potential.

While Lucky Sharma is good in the substantial role that she's given, the other heroine has nothing to do. Both of them suffer from bad lip sync. The other actors are all great to watch, as usual.

Set in Rajahmundry and surrounding areas, the movie had scope to be quite a visual treat, but the cinematography is quite bad. The music, on the other hand, is innovative, with a hummable quality - save for the item number, of course.

We sure wish All The Best were a better film than it is. Catch it if it's on TV, for some good moments, but don't expect the world out of it.
Share. Save. Connect.
Tweet
ALL THE BEST (TELUGU) SNAPSHOT 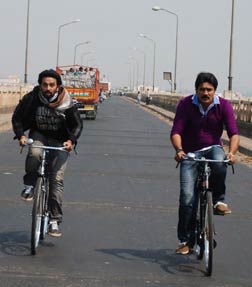 ADVERTISEMENT
This page was tagged for
All The Best (Telugu) telugu movie
All The Best (Telugu) reviews
release date
J D Chakravarthy, Srikanth
theatres list
Follow @fullhyderabad
Follow fullhyd.com on
About Hyderabad
The Hyderabad Community
Improve fullhyd.com
More
Our Other Local Guides
Our other sites
© Copyright 1999-2009 LRR Technologies (Hyderabad), Pvt Ltd. All rights reserved. fullhyd, fullhyderabad, Welcome To The Neighbourhood are trademarks of LRR Technologies (Hyderabad) Pvt Ltd. The textual, graphic, audio and audiovisual material in this site is protected by copyright law. You may not copy, distribute, or use this material except as necessary for your personal, non-commercial use. Any trademarks are the properties of their respective owners. More on Hyderabad, India. Jobs in Hyderabad.