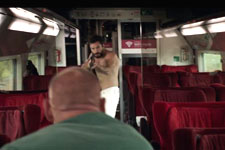 Daphne Rose / fullhyd.com
EDITOR RATING
4.0
Performances
Script
Music/Soundtrack
Visuals
5.0
4.0
5.0
5.0
Suggestions
Can watch again
No
Good for kids
No
Good for dates
No
Wait for OTT
Yes
In a career spanning over twice my age, Clint Eastwood has made himself a name as a star actor, director and producer, but when watching The 15:17 To Paris, it's kinda hard to digest that the man at the helm of this film is the same as the one that gave Hollywood some of its most enduring gems like The Bridges Of Madison County and Million Dollar Baby.

The idea behind this movie is right. The story is alright, too. But you know what they say - good intentions alone do not a good film make. Perhaps someone needed to remind the veteran director of that very same adage.

Basing the movie on a real life incident where a trio of friends successfully foiled a jihadist attack on a Paris-bound train, Eastwood breaks barriers by getting the self-same, real-life heroes to act in the movie. A novel idea that, and one that we thought was relatively fresh, regardless of all the aghast reactions that particular move generated amongst film circles (bankroll a project without a Chris Evans or Scott Eastwood or Matt Damon to add the required heft to the movie? what?). Because much to everyone's surprise, the three actually manage to pull off their scenes fairly convincingly, and considering how the movie is based on them, are convincing as the two American soldiers and their selfie-loving, Instagram-obsessed friend who thwarted a terrorist attack and rescued countless lives in the process.

But the person who fails in this happy story, and miserably at that, mind you, is Eastwood, with nary a sense of direction at exactly what he wants to portray on screen. With a non-linear narrative that takes you back and forth in time to the happenings on the train and the beginnings of the trio's friendship in good ol' Sacramento, California, in 2005, the movie also finds time to explore the lads' youths as they embark on their respective careers, and a Eurotrip, with actual scenes in some of Europe's more touristy spots, in just under 95 minutes. Where then does the director find the time to deal with the jihadist attack and the heroics of the three as they deal with the terrorist?

The answer to that is - lol, he doesn't. Because that entire terrorist attack? Gift-wrapped, complete with a bow and all, in under 10 minutes, in what has to be among the most underwhelming action scenes in recent film history. Like the attack was a minor little brawl the boys got into after having drunk a tad too much at the local watering hole, and not the life-changing event that merited a Legion d'Honneur for each of them, that it actually was.

That leads then to another question. What exactly was the purpose behind this film? Is it a biography meant to introduce these everyday heroes to folks who couldn't be expected to know the affairs of their local neighborhood, much less something that happened at an international stage? Is it a travel documentary sponsored by the EU with a bit of drama thrown in at the end to make it less documentary-ish? Is it an exploration of friendship that lasted over a decade and the things that such a strong bond can accomplish? Questions questions questions, but no prayer of an answer in sight.

Walking out of the theatre, you get the distinct sense that the three boys had been cheated out of what was a glorious chance to get their story told on screen and reap the plaudits that they rightly deserved. If only their story had been optioned by someone more capable of handling such narratives. Bollywood, perhaps? Considering how it's the season of making movies based on real-life people and their inspiring stories this side of the hemisphere, this is one story we'd have liked to watch. With good production values, decent BGM and high-octane action - in short, a film that made an actual song-and-dance about their heroics.

But alas, since that ain't the case here, a newspaper clipping regarding the event will have to do.
Share. Save. Connect.
Tweet
THE 15:17 TO PARIS SNAPSHOT 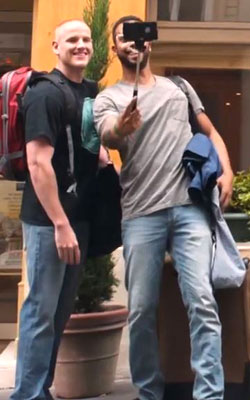 ADVERTISEMENT
This page was tagged for
The 15:17 to Paris english movie
The 15:17 to Paris reviews
release date
Spencer Stone, Anthony Sadler
theatres list
Follow @fullhyderabad
Follow fullhyd.com on
About Hyderabad
The Hyderabad Community
Improve fullhyd.com
More
Our Other Local Guides
Our other sites
© Copyright 1999-2009 LRR Technologies (Hyderabad), Pvt Ltd. All rights reserved. fullhyd, fullhyderabad, Welcome To The Neighbourhood are trademarks of LRR Technologies (Hyderabad) Pvt Ltd. The textual, graphic, audio and audiovisual material in this site is protected by copyright law. You may not copy, distribute, or use this material except as necessary for your personal, non-commercial use. Any trademarks are the properties of their respective owners. More on Hyderabad, India. Jobs in Hyderabad.