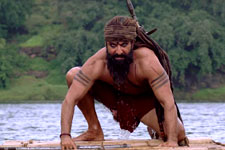 T J Reddy / fullhyd.com
EDITOR RATING
3.0
Performances
Script
Music/Soundtrack
Visuals
6.0
2.0
7.0
8.0
Suggestions
Can watch again
No
Good for kids
No
Good for dates
No
Wait for OTT
Yes
Most mainstream films implicitly ask the audiences to "leave their brains at home" when coming to the theatre. The world of cinema lacks logic unlike real life, and doesn't adhere to the laws of physics unlike real life. The world on screen is fake, but it does lead to actual fights among real people. Popcorn cinema is inherently fun by what it chooses to be. It can be loved or hated or loved by the measure of hatred people have towards it.

And then there is "art".

Art centres on mood, tone, world-building, eccentric characters and a lack of general morality, and bathes in philosophy. It doesn't have babyfaces (good guys) and heels (bad guys), it has tweeners (anti-heroes). One may think artful films have everything a film reviewer uses to pleasures him/herself. But sometimes, just sometimes, art forgets to be entertaining, or even entertainingly bad.

Laal Kaptaan is one such film brimming with arthouse staples. It has Nietzsche's nihilism while comprising of religious symbolism and reminding us of the world's grimness with stark realism. However, the movie captures the authenticity of the world a tad too accurately. Real-life has vast chunks of mundane existence peppered with moments we choose to acknowledge as important events. These events are essential only to us and not to anyone else. If these events were to eliminated, the world wouldn't cease nor would it be any worse for wear. As Frank Herbert theorizes in his acclaimed novel Dune - the people were itching for a revolution anyway, Paul Atreides was just a symbol they chose. If it weren't him, it would have been someone else. The revolution was inevitable.

You may be reading our meandering thoughts and wondering to yourself, "What is going on? Is this guy finally so up his behind with his philosophical wankery that he forgot to review this movie?"

The answer to that is both Yes and No.

Yes, because philosophical wankery is my jam. No, because this is what happens when a film asks you to bring your brain to the theatre and doesn't give you food for thought.

Laal Kaptaan follows a few days, weeks or months (the film never specifies) in the life of Gossain (Saif Ali Khan), a naga sadhu. He has renounced all worldly desires except for vengeance. His fixates his ire on Rehmat Khan (Manav Vij), a traitor who betrayed the Indian contingent at the Battle of Buxar. Why does this bounty-hunting sadhu want to kill this traitorous Muslim who doubles as a British sympathizer?

You'll need to watch the final five minutes of the film to find out. However, the movie's runtime is nearly two and a half hours. Boredom envelops the rest of the film in a shroud of darkness. Akin to the sands of the desert that encompass the locales of this film.

When one isn't given food to eat at the right time, one's stomach falls prey to either acidity or ulcers. An ulcer occurs when the digestive acids begin to act on the walls of the stomach instead of on food. When not given food for thought, our brains began to look inward, trying to find connections, symbols and deeper meanings in a film that has none.

There was one other person in the cinema hall, and he chose to rest his brain instead of turning it into mulch like I did with mine. He slept, soundly, while I saw both him and the big screen. I was shocked at how much I enjoyed what he had to offer when compared to this gorgeously shot, superbly scored, sublimely acted exercise in nothingness - a real miracle.

I reflected on how life was a collection of moments I thought were important (what I felt watching this movie would be) spaced out by vast areas of nothingness (what watching this movie turned out to be). This man rested through the journey so that he would be as fresh as a spring chicken when the destination arrived. I stayed awake through the wasteland only to be disinterested at the oasis.

Saif Ali Khan tried his best to make this forever bland journey bearable. His dirty dreadlocks, kohl-lined eyes and ash-covered face accentuated his commitment to the role. But like any sadhu, his words were no different than those of a friend of mine after he had smoked a joint. On a side-note, why are sadhus allowed to smoke pot when the common man isn't? I can attest to the fact that every common man can look at the past, present and future all the same when a psychedelic hits his brain. Anything is acceptable when one aims it through the prism of holiness, I guess.

However, barring this well-acted yet wafer-thin image of Parashuram, we have a standard assortment of masala movie clichés. Enter Manav Vij's Rehmat Khan who will kill anyone 'cause he is so evil. Zoya Hussain's nameless character who will do anything for her child. A British general who speaks Hindi with an English accent. And this triumvirate is the beginning of this movie's many one-note characters. Deepak Dobriyal's Sancho Panza is an exception to this cavalcade of clichés.

The film's underlying masala nature entirely takes over at the end when Gossain reveals his motivations to Rehmat Khan. It is a shot scored by an over-the-top thunder sound effect and embodying a twist I saw coming from the first scene. However, the man who slept through the majority of the film seemed rudely awakened by the sound of thunder. He was miffed yet impressed by the "sudden" reveal. He was there for the big moment, fully rested to enjoy it.

Laal Kaptaan is a film that employed me to construct a 1,000-word essay around one good moment, two good performances and a three-minute-long song that captures everything about the story better than a cinematic experience that felt like it went on for four days.

Time is a flat circle, as Gossain and Rust Cohle would say. This review might feel repetitive. But in the grand scheme of things, I'll be back again writing about something else sooner rather than later, anyway. My habit of reviewing the next new release might not change. However, I left the cinema questioning if I got my money's worth by stepping out with a tired frown or that random man got his by going with a well-rested smile. It is this random question, and not Laal Kaptaan, that gave my mind food for thought.
Share. Save. Connect.
Tweet
LAAL KAPTAAN SNAPSHOT 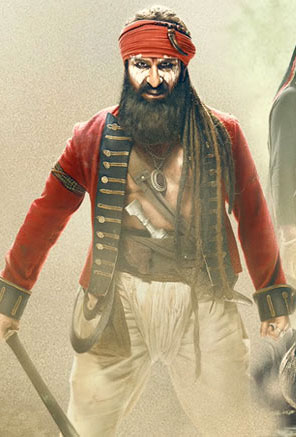 Which movie is being mentioned as raju's story. Please someone tell me
TJ Reddy on 22nd Oct 2019, 8:18am | Permalink
Hello Ibrahim

ADVERTISEMENT
This page was tagged for
kaptaan movie in hindi
Laal Kaptaan hindi movie
Laal Kaptaan reviews
release date
Saif Ali Khan, Manav Vij
Follow @fullhyderabad
Follow fullhyd.com on
About Hyderabad
The Hyderabad Community
Improve fullhyd.com
More
Our Other Local Guides
Our other sites
© Copyright 1999-2009 LRR Technologies (Hyderabad), Pvt Ltd. All rights reserved. fullhyd, fullhyderabad, Welcome To The Neighbourhood are trademarks of LRR Technologies (Hyderabad) Pvt Ltd. The textual, graphic, audio and audiovisual material in this site is protected by copyright law. You may not copy, distribute, or use this material except as necessary for your personal, non-commercial use. Any trademarks are the properties of their respective owners. More on Hyderabad, India. Jobs in Hyderabad.