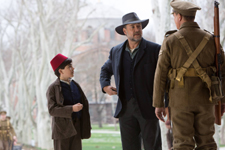 Nupur Barua / fullhyd.com
EDITOR RATING
6.0
Performances
Script
Music/Soundtrack
Visuals
8.0
6.0
5.0
8.0
Suggestions
Can watch again
Yes
Good for kids
No
Good for dates
Yes
Wait for OTT
No
As the text at the end of the film reminds us, more than 37 million people were killed in World War I, of which around 8 million were never identified. They remain, till date, lost and nameless. Russell Crowe's directorial debut, The Water Diviner, based on the book of the same name by Andrew Anastasios and Dr Meaghan Wilson-Anastasios, is dedicated to these missing men and women, and to their families. The film states that the story is based on true events that took place almost a hundred years ago.

Joshua Connor (Russell Crowe) is a whiz when it comes to finding hidden water in the dry land of Victoria, Australia. He is a farmer, and lives on a ranch. His wife Lizzie (Jacqueline McKenzie) is not quite right in the head, and she has reason to be - her three sons never came back from the Gallipoli Campaign in Turkey, nor did their remains, and it has been four years. Unable to live with the depression, she drowns in a nearby pond, and Joshua becomes determined to find out where the last remains of his sons are situated.

The Gallipoli Campaign, in which the Allied Western Forces lost to the Turkish Army, was a disaster on many levels. Now that four years have passed, the Australian and New Zealand Army Corps (ANZAC) are trying their best to find missing bodies to give them a proper burial and to identify them. In fact, this is the first battle that tries to do this - earlier, dead men and animals would be thrown into a huge pit, some limestone would be sprinkled, and that would become the mass grave.

The ANZAC, however, need the help of the Turkish army for this, and Major Hasan (Yilmaz Erdogan) and Sergeant Jemal (Cem Yilmaz) are sent to the Dardanelles to share their knowledge of the battlefield with ANZAC Captain Lt-Colonel Cyril Hughes (Jai Courtney).

Joshua, in the meantime, reaches Istanbul, only to discover that civilians are not allowed to enter the Dardanelles area. Not only are there mass grave details being worked out, the Greeks are also becoming more and more aggressive in the Turkish War of Independence that is going on.

Joshua is led to a hotel by a young boy, Orhan (Dylan Georgiades), whose recently-widowed mother Ayshe (Olga Kurylenko) hates Australians. She runs the hotel, and reluctantly allows Joshua to stay. She gradually begins to understand his pain, and suggests a way for him to get to Cannakale without a permit.

Joshua reaches the site where the ANZACs have set up camp, and exhibits enough stubbornness for Major Hasan to suggest that they help him. They manage to find the bones of his two younger sons, but of the elder one, Arthur (Ryan Corr), there is no sign. The British authorities, struggling to find diplomatic solutions to end the Turkish War of Independence, want Joshua out of the country, but the Australian farmer does not want to leave until he can find out what happened to Arthur.

The story is a moving one. As Major Hasan puts is, Joshua Connor is the only father who came looking for his missing sons. The screenplay incorporates pathos and helplessness with a bit of romance and laughter, but the central theme - the search for his sons - remains constantly relevant. At no point do you forget why Joshua is in Turkey. His silent perseverance and his unimposing presence can be disconcerting to most, and he makes people sit up and take notice. Major Hasan and Sergeant Jemal, too, begin to reluctantly admire him. He is no hero, just a determined father, who has lost everything.

With a story like this, there is bound to be some melodrama, and The Water Diviner has plenty of it. At times Russell Crowe goes overboard with symbolism and superstitions, but he manages to bring the film back on track again with a new plot point that makes you wonder where it is headed. And although the melodrama makes Joshua's progress somewhat predictable, the screenplay still has enough surprises to keep you hooked.

However, the director spends too much time in setting up the tragedy, and the resolution and climax are tackled in a somewhat hurried manner - almost unsatisfactory, in fact, after you have invested all this time in the story. Almost two hours long, The Water Diviner wastes time on unnecessary details that do not add to the progress of the story, such as the personal strife in Ayshe's life. The relationship between Joshua and Ayshe is handled without too much sensitivity, but that between Orhan and Joshua is given a lot of screen time. The dialogues are mundane at times, with some relief only in the humour, and at times the movie drags and seems repetitive.

The subject, however, deals with an important chapter in history, and the Battle of Gallipoli is still an emotional issue for many. The ANZAC Day is an annual event to mark the anniversary of the battle even today, and it makes sense to release this film this year as a tribute to commemorate a 100 years of the battle. Crowe must have chosen a historical as his directorial debut for emotional reasons.

Russell Crowe is there in every scene, looking suitably haggard and lost, as his role demands. It could not have been easy to direct and act at the same time, but he pulls off both roles with ease. He is the anchor of the movie, and you immediately connect with his character from the very beginning.

Olga Kurylenko does not get a chance to showcase the full range of her acting abilities, and comes across as sullen most of the time. Yilmaz Erdogan is impressive, and his character will remain in your consciousness for a while. Cem Yilmaz plays the comic buffoon with panache. Dylan Georgiades leaves a mark, too. You'll wish there were more of Jai Courtney, though. He is difficult to ignore, and can be very intense.

Set in the arid Australia and the vibrant Turkey of the years after the First World War, the film displays some great production design. The Blue Mosque in Istanbul looks a little too shiny to be placed in the early 20th century, but the rest of the sets and locations are almost like they're from the Arabian Nights, or at least a Western version of what a Central Asian country may have looked like. The colour palette of the sets and the designs is carefully co-ordinated, and everything, even in Australia, has a little too much contrast, but it is effective.

The visuals are stunning, since there are so many outdoor locations, and Crowe seems to prefer a lot of top angles. The music is rather mixed, and cannot be categorised under specific genres. It does not really bring out the culture of the place. The editing is choppy in places, but serves its purpose well most of the time.

The site of the Battle of Gallipoli is today a tourist destination, and the Turkish people are both proud and emotional about the event. The Water Diviner is bound to touch more than a few hearts, with Joshua epitomising the loss and despair of the families who suffered because of the battle campaign. If you are interested in history, this movie is a must-watch, especially if you like Russell Crowe.
Share. Save. Connect.
Tweet
THE WATER DIVINER SNAPSHOT 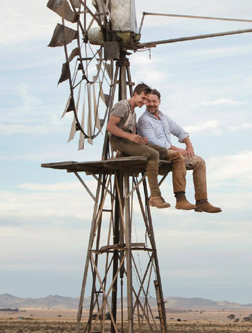 ADVERTISEMENT
This page was tagged for
The Water Diviner english movie
The Water Diviner reviews
release date
Jai Courtney, Russell Crowe
theatres list
Follow @fullhyderabad
Follow fullhyd.com on
About Hyderabad
The Hyderabad Community
Improve fullhyd.com
More
Our Other Local Guides
Our other sites
© Copyright 1999-2009 LRR Technologies (Hyderabad), Pvt Ltd. All rights reserved. fullhyd, fullhyderabad, Welcome To The Neighbourhood are trademarks of LRR Technologies (Hyderabad) Pvt Ltd. The textual, graphic, audio and audiovisual material in this site is protected by copyright law. You may not copy, distribute, or use this material except as necessary for your personal, non-commercial use. Any trademarks are the properties of their respective owners. More on Hyderabad, India. Jobs in Hyderabad.