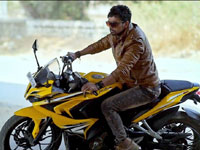 Jaiwantika Dutta-Dhupkar / fullhyd.com
EDITOR RATING
2.0
Performances
Script
Music/Soundtrack
Visuals
5.0
2.0
2.0
5.0
Suggestions
Can watch again
No
Good for kids
No
Good for dates
No
Wait to rent it
No
Watching "Badmash Pottey" which flaunts its Dakhni blatantly all through in a bid to endear itself to audiences, you are amazed at how this linguistic assertion is so completely devoid of any of the cultural connotations that usually come with the territory. This actually means that "Badmash Pottey" fails at being Hyderabadi somehow; there's nothing particularly Hyderabadi about this film, except the language of course, and some familiar locations.

While debates about what it means to be "Hyderabadi" could go on forever, even the most liberal Hyderabadi would agree that presenting a certain cultural context for your story is necessary. Badmash Pottey spends a lot of time in farmhouses and malls, all of which could be anywhere at all. The entire approach is shallow, and why comedy is the preferred genre when it clearly isn't anyone's USP is a puzzle. The abhorrence for say Dakhni horror or Dakhni romance, or maybe Dakhni biography or Dakhni period films does nothing for either this film or the entire Dakhni film "industry".

At a time when amateur filmmakers are uploading quality short films and documentaries on social media for free, films like Badmash Pottey think they can make bad cinema and make money out of it because they believe they have an audience. It seems so, too - such films do find a limited release in select theatres. Dakhni aficionados might fondly argue that it was the best the makers could do on a limited budget, but Badmash Pottey's problem isn't (just) the financial budget, it's mainly the creative bankruptcy.

Right upto the interval, the audience is led along, with no clue as to what the story is. It's just a bunch of incidents loosely strung together from the daily lives of two petty thieves, Yabba (Adnan Sajid Khan) and Khan (Farukh Khan). Post-interval, the makers are suddenly inspired to create some sort of story, and it's the most original one in the world. One day, Yabba and Khan rob an influential henchman and MLA Tiger and end up in the police lockup, from where Tiger's feisty sister (Asna Khan) picks them up. She takes them to her house and makes them work as her household help as she wants to punish them, and because they stole her favourite toy in their looting spree.

During their tryst at Tiger's house, Khan kisses the sister by mistake, and she falls in love with him. Yabba, meanwhile, is stalked by a homosexual bodyguard. Eventually the sister proposes to Khan, but he rejects her because he's just a petty thief and her brother's a powerful henchman. Dismayed at the turn of events, the sister grants the two their freedom. When the duo are making their way home, a rival gang accosts them and attempts to rape the sister. Khan rescues her, and they all make their way back to the farmhouse, where her brother solemnizes their nuptials.

The performances aren't bad, and the actors are actually quite sincere, but the bad writing (Farukh Khan) can't save them. The direction (GEVS) is below par. The camera work could do with some improvement - many scenes are badly lit, and too many maverick shots and angles taken. The art direction is quite ghastly, and you wonder why entire rooms had to be painted pink or red or purple for a film shoot; coupled with the bad cinematography and lighting, they make for some very ugly shots.

There are some interesting outdoor scenes; like an action scene that was shot in an old junkyard full of barrels, and a funny scene in a haunted house that actually turned out nice. The songs are terrible - the music is rehashed, and even the original songs (Mayur) aren't interesting. In the film industry, where talent is willing to work for free, it's sad that this is the best that some folks put together after paying their crew.

The movie is noisy. A lot has to do with what is perceived as funny and what is considered a joke - and this misconception is then associated with a linguistic category like Dakhni, which is then basically confusing two things together. What is even more appalling is that this has become a trend, although the poor performance of similar Dakhni "comedies" might be a wake-up call. Currently undergoing something not very different from the GoldRush, or the trend of saas-bahu soaps that took television by storm till people just got sick of them, films like Badmash Pottey refuse to experiment and continue to be diluted versions of each other.

Badmash Pottey's strange obsession with deviant behavior; its glorification of thieves, thugs, the underworld, guns and extortion; and, again, the association of this moral category with a linguistic category like Dakhni, is notable as well. Fans of this genre know that that is the case in all of these movies. Making a spoof genre out of what is actually a language people speak everyday has a limited shelf life before the frowning starts, and associating such people with questionable morals is legitimizing a sorry perception. Overall, Badmash Pottey as a film lacks confidence and is a very weak comedy.

The women in the film seem to suffer at the hands of makers who don't actually understand women, but speak with much authority about their affairs. So everything the women do in this film seems a little far-fetched. And the "women as property" mentality runs all through the film - even when Khan is employed at Tiger's house by his sister as a household help.

Novelty value or linguistic familiarity isn't enough to draw the crowds. A good film has to make a better effort, and the carelessness in Badmash Pottey shows.
Share. Save. Connect.
Tweet
BADMASH POTTEY SNAPSHOT 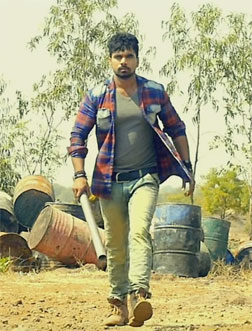 ADVERTISEMENT
This page was tagged for
Badmash Potty hyderabadi movie actors name
Badmash Pottey urdu movie
Badmash Pottey reviews
release date
Adnan Sajid Khan, Farukh Khan
Follow @fullhyderabad
Follow fullhyd.com on
About Hyderabad
The Hyderabad Community
Improve fullhyd.com
More
Our Other Local Guides
Our other sites
© Copyright 1999-2009 LRR Technologies (Hyderabad), Pvt Ltd. All rights reserved. fullhyd, fullhyderabad, Welcome To The Neighbourhood are trademarks of LRR Technologies (Hyderabad) Pvt Ltd. The textual, graphic, audio and audiovisual material in this site is protected by copyright law. You may not copy, distribute, or use this material except as necessary for your personal, non-commercial use. Any trademarks are the properties of their respective owners. More on Hyderabad, India. Jobs in Hyderabad.