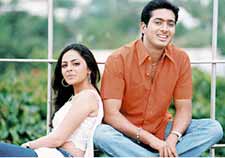 Despite its vivacious name, Holi is perhaps the dullest movie of this year, save for its clean music. An uninspiring, unexciting love story is made all the more lifeless with run-of-the-mill performances and a super schmuck plot. Bearing in mind these things, it can be deduced that the very survival of the movie (and of the unlucky audience) now depends heavily on its star-power (just couldn't restrain myself from using that!), tinkling music and picturesque 'n' splendid songs. 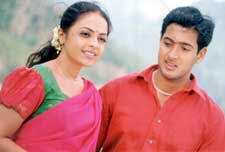 Kiran (Uday Kiran) is born into a family that deems that love comes first and then marriage. Chinni (Richa) thinks just the opposite. One fine Holi-day, Kiran expresses his love for her to Chinni, to which she replies in her own way - marriage first, love next. Kiran is heartbroken, thinking that Chinni is just another career-minded woman. On the other hand, Chinni thinks that Kiran is just another road-romeo who merely wants to go the movies with her. Naturally, after lots and lots of twists, turns, smacks and whacks, the movie ends with both getting engaged to each other (how different! engaged, not married!). 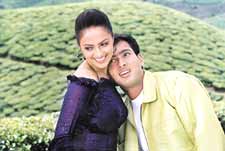 Uday Kiran makes a deadly comeback... to his former Neanderthal form! He seems to have improved in the "mardangee" section, though. Glamour-wise, Richa gives the impression of an angel fallen from the sky. Performance-wise she gives the same impression, but only this time that she probably fell in the wrong way and landed head first. Dr. Sunil (C, C++, Java and Oracle), as he refers to himself in the movie, does his usual distinctive cabaret, and just about manages to meet the expectations of a majority of the audience.

Now given the utter failure of all other crucial departments, it is fair enough to say that RP has given the movie its much required kiss of life. As expected, the music is in general clean, soft and melodious. But given the presence of a mean sub-woofer, the music could also prove otherwise - hard-hitting, with a lot of punch in it.

By and large there is a very fine line between creativity and monotony, and Holi cuts it with scissors. Excluding the clean music, there is nothing but tedium and lifelessness in it. If you started looking up at the stars and matching each one with a reason about why you shouldn't watch such movies, you'll do great till you run out of stars!
Share. Save. Connect.
Tweet
HOLI SNAPSHOT
See Holi full details
HOLI USER REVIEWS
1 - 3 OF 3 COMMENTS
POSITIVE  |  NEGATIVE |  NEWEST  |  OLDEST  |  MOST HELPFUL  |  LEAST HELPFUL
USER RATING
6.8
23 USERS
Performances
Script
Music/Soundtrack
Visuals
NA
NA
NA
NA
Can watch again - NA
Good for kids - NA
Good for dates - NA
Wait for OTT - NA
Rakesh on 25th Oct 2002, 10:57am | Permalink
average movie - but must be compulsorily watched to see beauty of richa pallod - she is the most beautiful girl on earth. Great figure, great top, face, smile... everything abt her is simply the best. can't miss her tight trouser walks.
RATING
10
Mison Jaelyn on 23rd Sep 2002, 2:27am | Permalink
i like it
RATING
10
Jay Prakash on 1st Sep 2002, 7:19pm | Permalink
Music is below average - Holi, the festival should be celebrated with jive. Soothing music is not the right one, infact RP failed to deliver. Mani Sharma's pulsating, beat music could be the right one here. As far as the story - termed as an experiment, but I wonder what is new about this?
RATING
2
LEAVE A COMMENT
fullhyd.com has 700,000+ monthly visits. Tell Hyderabad what you feel about Holi!
MORE MOVIES
Latest Reviews
Don't Worry Darling
Vikram Vedha
Ponniyin Selvan - 1
Naane Varuvean
Nene Vasthunna
more
Krishna Vrinda Vihari
Saakini Daakini
Where the Crawdads Sing
Everything Everywhere All At...
Aa Ammayi Gurinchi Meeku Che...
Brahmastra: Part One - Shiva
Oke Oka Jeevitham
Brahmastra: Part One - Shiva
Ranga Ranga Vaibhavanga
First Day, First Show
Contemporary Reviews
Ek Aur Ek Gyarah
National Security
The Recruit
Hollywood
Dostana (Amitabh)
more
Welcome To The Jungle (Hindi...
Snakes On A Plane
Nee... Sneham!
Shakti (Hindi)
Rishtey
Matrix Reloaded (Hindi)
Red Dragon
Terminator 3 Rise Of The Mac...
Star Wars: Episode I - The P...
Random Reviews
Mona Lisa Smile
Premisthe...
Rocky
300 - The Movie
Rab Ne Bana Di Jodi
more
The Wolfman (Telugu)
Thor (Hindi)
Blood Money
Shree
Bangaaru Kodipetta
Bandipotu
Thikka
Firangi
Spider-Man: Far From Home (H...
The Legend
SEARCH MOVIES
Dissatisfied with the results? Report a problem or error, or add a listing.
ADVERTISEMENT
SHOUTBOX!
{{todo.name}}
{{todo.date}}
[
ip{{todo.ip}}
]
{{ todo.summary }}... expand »
{{ todo.text }} « collapse
First  |  Prev  |   1   2  3  {{current_page-1}}  {{current_page}}  {{current_page+1}}  {{last_page-2}}  {{last_page-1}}  {{last_page}}   |  Next  |  Last
{{todos[0].name}}

ADVERTISEMENT
This page was tagged for
???? ?????? ????
holi movie telugu release
Holi full movie 2002
uday kiran family
holi telugu movie status
Follow @fullhyderabad
Follow fullhyd.com on
About Hyderabad
The Hyderabad Community
Improve fullhyd.com
More
Our Other Local Guides
Our other sites
© Copyright 1999-2009 LRR Technologies (Hyderabad), Pvt Ltd. All rights reserved. fullhyd, fullhyderabad, Welcome To The Neighbourhood are trademarks of LRR Technologies (Hyderabad) Pvt Ltd. The textual, graphic, audio and audiovisual material in this site is protected by copyright law. You may not copy, distribute, or use this material except as necessary for your personal, non-commercial use. Any trademarks are the properties of their respective owners. More on Hyderabad, India. Jobs in Hyderabad.