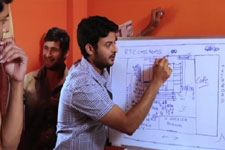 Josh / fullhyd.com
EDITOR RATING
6.0
Performances
Script
Music/Soundtrack
Visuals
6.0
7.0
5.0
7.0
Suggestions
Can watch again
Yes
Good for kids
No
Good for dates
Yes
Wait for OTT
No
Bhupal, an aspiring filmmaker, tries to keep in the good books of Jai (Adarsh Balakrishna), whose father is producing the latest Mahesh Babu movie. Nandu, a jilted lover, has a bone to pick with the same Jai for "stealing" his girlfriend (Poonam Kaur). Jai himself is neck-deep in debt but can't let that fact out to his stingy father.

After a fateful night, Bhupal, Jai and Nandu find themselves in an unenviable situation where they are held at gunpoint and ordered to repay Rs. 50 lakhs in a week's time. This they plan to do by kidnapping Mahesh Babu.

Our filmmakers have always had a penchant for the preposterous (find another film industry which features SUVs bursting out in tandem from under the ground). But rarely is it done well. However, kidnapping Mahesh Babu is easily among the top ten preposterous and audacious ideas we've seen on our screens, and director Sushanth Reddy makes it work, too. It's quite a joy to watch a filmmaker come up with a whacky idea and execute it well, too.

Super Star Kidnap is a riot for a large part of its less-than-two-hours runtime. You don't exactly notice the dips in narration because the next good bit is already there. There are any number of quirky scenes, and often just the dialogues are enough to keep you chuckling. The film also brings out some of the comic best of some actors.

Like Fish Venkat, for example. After playing the henchman to the local don in dozens of movies, he finally gets the upgrade to playing the local don himself. This increases both his screen time and screen space, and he makes the best use of it. His Pattala Raju is a don past his prime and desperate to regain his lost sheen. Venkat plays him with a combination of burliness and earnestness which reminds you of Narsing Yadav in his heyday (remember "theliyadu saar" from Kshana Kshanam?).

And Vennela Kishore. This comedian-cum-director (with back-to-back flops as he reminds us thrice through the duration of the movie) is easily the best thing about Super Star Kidnap. We've always known that he is very talented, but he is often under-utilised or tends to get carried away (like in his two directorials). Here, though, he is in great form. His one-liners, his gags and his body language are spot on, and he is almost effortlessly hilarious.

That isn't to say the movie doesn't have any glitches. There are any number of places with issues of continuity, and the lead actors' performances can feel amateurish sometimes. Plus, a lot of the story and narrative is drawn from different sources. The beginning stretch showing the spoilt brat Jai is quite like Ranbir Kapoor in Wake Up Sid. The scheming son attempting to squeeze a ransom out of his own father comes off as Karunakaran in the Tamil flick Soodhu Kavvum. And large parts of the plot including character details (like Shraddha Das' Farah Khan) are clearly taken from Rajat Kapoor's Phas Gaye Re Obama.

We're telling you all of this so that you don't walk into the hall expecting a highly original comic classic. Super Star Kidnap is none of that. It is just plenty of camp handled with good technique. Even where the plot is clearly lifted from other sources you won't want to cry hoarse about plagiarism. Sushanth Reddy makes sure that he gives enough character to the film in his own original way, and the final product makes copied content a quibble rather than a complaint.

Most things work for the movie. Among the actors, Bhupal, speaking with a free-flowing Telangana dialect, appears to be a find. Sharddha Das manages to look menacing despite her screaming good looks. Posani does what he is so used to doing, and it suprisingly hasn't yet become tiresome. The production values are high, and the editing is almost top-notch.

If you think of plagiarism as a form of abduction in itself, unlike his three protagonists, Sushanth Reddy does a very good job of it.
Share. Save. Connect.
Tweet
SUPERSTAR KIDNAP SNAPSHOT 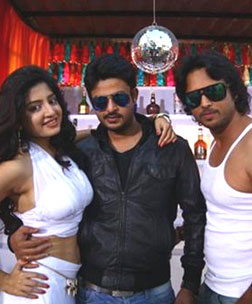 ADVERTISEMENT
This page was tagged for
Superstar Kidnap telugu movie
Superstar Kidnap reviews
release date
Adarsh Balakrishna, Nandu
theatres list
Follow @fullhyderabad
Follow fullhyd.com on
About Hyderabad
The Hyderabad Community
Improve fullhyd.com
More
Our Other Local Guides
Our other sites
© Copyright 1999-2009 LRR Technologies (Hyderabad), Pvt Ltd. All rights reserved. fullhyd, fullhyderabad, Welcome To The Neighbourhood are trademarks of LRR Technologies (Hyderabad) Pvt Ltd. The textual, graphic, audio and audiovisual material in this site is protected by copyright law. You may not copy, distribute, or use this material except as necessary for your personal, non-commercial use. Any trademarks are the properties of their respective owners. More on Hyderabad, India. Jobs in Hyderabad.