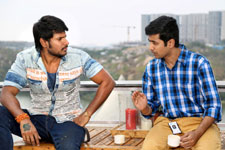 Josh / fullhyd.com
EDITOR RATING
6.0
Performances
Script
Music/Soundtrack
Visuals
6.0
6.0
5.0
7.0
Suggestions
Can watch again
No
Good for kids
Yes
Good for dates
Yes
Wait for OTT
No
Picture this. Fish Venkat (who is possibly Tollywood's cutest goon) and two other staple comic villains play North-Indian ruffians in Varanasi. Except they don't speak Hindi. They speak Telugu. With Telugu people. Fish Venkat recites Telugu poetry in his standard Telangana dialect, and another guy speaks Telugu like a Marwari pawn broker. Oh wait, there's also one of these North-Indian men who recognises Nagarjuna's voice on the phone and asserts that he himself is Rajasekhar.

It's all rather mind-boggling, more so when Sundeep Kishan begins to mouth Telugu dialogues (with an unauthentic Godavari accent) to the villain who's a caste head in a village in Uttar Pradesh. You ask us how that makes sense? We reply - "Uh... Sense?"

True, one is not to fish for logic in a commercial film. If in Dhoom 3 even the I'm-too-perfect Aamir Khan himself could run down a vertical wall completely disregarding the fact that gravity would pull him down faster than he could run, then we can buy the setting where everyone in the country can speak Telugu off the bat. Building the Tower of Babel is next on the To-Do list.

Putting linguistic complaints aside, let's get to the plot. Tiger (Sundeep Kishan) and Vishnu (Rahul Ravindran) were brought up in the same orphanage in Rajahmundry until Vishnu gets adopted and goes on to lead a more secure life in Hyderabad. Tiger has always been protective of his best buddy, and continues to want to look out for him after growing up to be the local do-gooder in Rajahmundry. But Vishnu, with his plush job in Hyderabad, decides to move on and abandon his over-protective friend for the sake of his girlfriend Ganga (Seerat Kapoor). A hurt Tiger vows to keep away, but is finally brought back into action when Vishnu's relationship lands him in a situation where he desperately needs protection (no joke there - stop sniggering now).

A plot as barebones as that needs some good execution. Thankfully debutante Vi Anand (earlier an assistant of A R Murugadoss) doesn't disappoint. We aren't saying he shows master-class, but he gets the basics right. The story is paced well and the situations are often interesting. The romance between Rahul Ravindran and Seerat Kapoor is functional to start with, but things pick up after Sundeep Kishan's late entry. Through the two-hour runtime, you don't get bored. And often, you feel involved.

Sundeep Kishan, perhaps for the first time, takes up the full-blown mass hero mantle, and he suits it. Tall, rugged, sometimes goofy, and very expressive, he plays the mass hero with an ease that it is surprising he didn't do this more. But like his earlier choices, this one is quite interesting and unconventional, too, in that his Tiger doesn't have a romantic track through the movie.

The last time a Telugu hero experimented this way was perhaps Pawan Kalyan in Bangaram. Bangaram's (lack of) financial fortunes may have something to do with the fact that no other director even remotely entertained the notion of a heroineless hero over the years after that. But then Pawan Kalyan's star status might have made him unsuitable for such an experiment. Sundeep Kishan doesn't have this baggage, and the choice to not include a pointless romantic track works for Tiger.

The couple in the movie, Vishnu-Ganga, gets a significant part of the runtime, and that works for the film, too. Rahul Ravindran is quite a fit for the role of Vishnu with his boyish charm and natural performance. Seerat Kapoor, though, is a long way from being a half-decent actor, and it doesn't help that she looks extremely urban even in traditional attires.

Sapthagiri and Thagubothu Ramesh are both there, but they don't make an impression (largely due to poor writing in those scenes). Surprisingly, the laughs come from the villain's goons doubling up as comedians. It's completely out of character at times, but what did we say about things making sense at the beginning of this review?

The best thing about Tiger is how the mass hero build-up is executed. We've already mentioned how Sundeep Kishan's rugged hunk look fits the role well. Further, Thaman (despite an ordinary soundtrack) makes the background theme come alive for the hero. The dubstep-influenced hero's theme makes for very good impact during the fights (quite like in Race Gurram). Chota K Naidu shows off his cinematographic mastery throughout the movie, and the visuals are particularly effective when they are focused on Tiger's heroism.

If you are a sucker for neatly done mass cinema, Tiger can be a very satisfying watch.
Share. Save. Connect.
Tweet
TIGER (TELUGU) SNAPSHOT 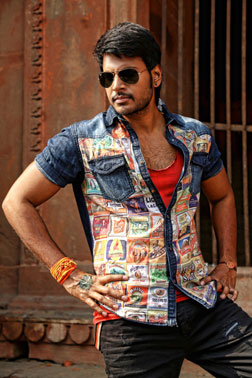 ADVERTISEMENT
This page was tagged for
Tiger (Telugu) telugu movie
Tiger (Telugu) reviews
release date
Sundeep Kishan, Seerath Kapoor
theatres list
Follow @fullhyderabad
Follow fullhyd.com on
About Hyderabad
The Hyderabad Community
Improve fullhyd.com
More
Our Other Local Guides
Our other sites
© Copyright 1999-2009 LRR Technologies (Hyderabad), Pvt Ltd. All rights reserved. fullhyd, fullhyderabad, Welcome To The Neighbourhood are trademarks of LRR Technologies (Hyderabad) Pvt Ltd. The textual, graphic, audio and audiovisual material in this site is protected by copyright law. You may not copy, distribute, or use this material except as necessary for your personal, non-commercial use. Any trademarks are the properties of their respective owners. More on Hyderabad, India. Jobs in Hyderabad.