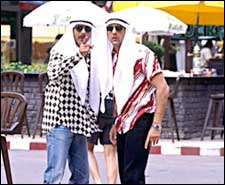 Priyanka Pulla / fullhyd.com
EDITOR RATING
5.0
Performances
Script
Music/Soundtrack
Visuals
NA
NA
NA
NA
Suggestions
Can watch again
NA
Good for kids
NA
Good for dates
NA
Wait to rent it
NA
The Bollywood pratfall comedy wing has got to give up sometime. It’s getting tragically unfunny and out of hand. The actors are getting bigger, and their lists are getting longer. The visuals have moved from misshapen actors on rickety sets to surrealistic abstractions of the good life in a go-go: big pink and blue spots bouncing on the screen, lot of spotless skin, sunlight, azure seas, silky hair, six-pack stomachs… they are pumping our brain to bursting with their jazzy imagery.

It might have been digestible if not for the seeming inverse relationship between the extent of glitz and the asininity of the plot. They were unfunny once, they were unfunny again, but they keep persisting in a suicidal way. If you rip your pants once and nobody laughs, you don’t keep ripping it further and further hoping that funny bone will snap.

That’s how it is when you watch the clique of dapper men and foxy babes in No Entry, tying themselves up in knots trying to seem funny. Three men, Prem (Salman Khan), Sunny (Fardeen Khan) and Kishen (Anil Kapoor), have three wives; Pooja (Esha Deol), Sanjana (Celina Jaitley) and Kajal (Lara Dutta) respectively. Prem is the philandering drop of ink, threatening to dye the crystal clear pool of the faithful, but still funny, Sunny and Kishen. He manages to get Kishen to try other women, and that is the first pretense for the movie to evoke some laughs.

Kishen, when caught, pretends to suspicious wife Kajal that the girl in his room is really Sunny’s wife. That lands Sunny into trouble because his girl Sanjana can’t stand him telling any lies. Prem is behind it all, egging both on and ahead, and enjoying his women thoroughly in the meantime.

Bipasha Basu is Bobby, an international class prostitute, who throws herself into the fray with abandon and lets herself get pulled in any which way, depending on who is throwing more green at her.

To make things funny, the plot jumps from one improbability to another, until it gets as knotty as a fishing net in the Musi. And this is where it consciously refuses to stop, possibly because any attempt to clean the slate now wouldn’t be believable enough.

Therefore, the script tries to escape the corner it has painted itself into, by going ahead and walking right on the floor. You can actually hear the splotch-splotch and see the bloopers pattering all over the script.

Bobby suddenly gushes out like a wrongly opened coke bottle, and tells everyone that she is into prostitution to save her comatose husband. Prem’s wife makes the frightening declaration that she knew of his philandering ways all along, but still loved him and was just waiting for him to change. And therefore, it really is no big deal anymore to forgive him and finish the story.

The other two boys go through the steps of unknotting the plot, exactly the same way they knotted it in the first place. As openly and plainly as if there were no audience watching.

At the end of the day, the movie is a million beautiful locales, babes, and muscled men in denim cutoff swimming trunks. (Salman Khan goes one step ahead and takes off his pants as well.) It really looks like the bigger, better sequel to Maine Pyar Kyon Kiya, given Salman Khan, the even longer cast list of active heroes, and the doltishness of the plot that beats all the old targets.

Lara looks stunning throughout, although the chunky black mangalsutra she insists on wearing on all her itsy bitsy, low cut gowns, is as incongruous as a flowery braid with Chanel’s little black dress. Celina Jaitley joins the wifey gang a little later and starts dressing the same odd way. Esha Deol comes and goes like an apparition, and doesn’t even have the glad rags to go with her mangalsutra.

Bipasha Basu, as the sexy seductress probably does the best job of all. Her lack of a mangalsutra comes as a definite relief.

The men are okay. Salman is as hunky and irrepressible as ever, Anil Kapoor is vaguely funny, and Fardeen is downright cute as the yuppie photographer caught up in the tussle.

If you liked Maine Pyar Kyon Kiya, make a beeline for the theater right away. If you didn’t, then the chances are you hated it with all your heart. If that’s the case, just stay home and save your money for charity. And hope to God that the Bollywood slapstick department gives it a rest, at least now.
Share. Save. Connect.
Tweet
NO ENTRY SNAPSHOT

See No Entry full details
NO ENTRY USER REVIEWS
1 - 3 OF 3 COMMENTS
POSITIVE  |  NEGATIVE |  NEWEST  |  OLDEST  |  MOST HELPFUL  |  LEAST HELPFUL
USER RATING
6.8
33 USERS
Performances
Script
Music/Soundtrack
Visuals
NA
NA
NA
NA
Can watch again - NA
Good for kids - NA
Good for dates - NA
Wait to rent it - NA
God-ji on 2nd Oct 2005, 9:23pm | Permalink
the movie is definitely a gr8 entertainer and not at all a bore! but as is usual for most indian comedy flicks, leave your brains at home first.
RATING
6
Sadat Amir on 30th Aug 2005, 5:54pm | Permalink
ya movie is really bore
RATING
2
Aishwarya Mantha on 26th Aug 2005, 10:36pm | Permalink
A very funny review. I loved the metaphors and similies that were used. Finally a refreshing change.. I was sick of the old fullhyd writing style...

Good work priyanka.. Are you from KVK?

I havent watched the movie yet and after rerading review, I wouldnt want to either.

ADVERTISEMENT
This page was tagged for
No Entry hindi movie
No Entry reviews
release date
Salman Khan, Anil Kapoor
theatres list
Follow @fullhyderabad
Follow fullhyd.com on
About Hyderabad
The Hyderabad Community
Improve fullhyd.com
More
Our Other Local Guides
Our other sites
© Copyright 1999-2009 LRR Technologies (Hyderabad), Pvt Ltd. All rights reserved. fullhyd, fullhyderabad, Welcome To The Neighbourhood are trademarks of LRR Technologies (Hyderabad) Pvt Ltd. The textual, graphic, audio and audiovisual material in this site is protected by copyright law. You may not copy, distribute, or use this material except as necessary for your personal, non-commercial use. Any trademarks are the properties of their respective owners. More on Hyderabad, India. Jobs in Hyderabad.