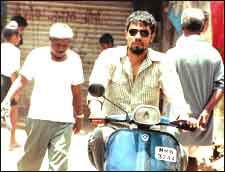 Ghazala Rizvi / fullhyd.com
EDITOR RATING
5.0
Performances
Script
Music/Soundtrack
Visuals
NA
NA
NA
NA
Suggestions
Can watch again
NA
Good for kids
NA
Good for dates
NA
Wait to rent it
NA
Dashing macho men, fire-spitting guns, bone-crunching action sequences, flesh-flaunting babes, and more... are all missing from the 'D' scene. But if you want to indulge in your taste for art cinema, and are looking for grisly details of the poverty-stricken, gutter-ridden underworld, with scantily-clad bar dancers doing their turn... you are again at the wrong movie.

It appears that Ram Gopal Verma followed a new algorithm for his 'D'. He sneaked 1,001 bullets from Taishey-Haiyaba's cache, got together a collection of ugly mugged men, and made writer M Gupta add a total of 18 sentences. Then he consulted his numerologist, and christened the outcome as 'D'.

'D', a would-be different movie, certainly turns out to be different. The camera's drunken waverings, the inappropriate music, and the almost complete absence of spoken words, indicate strongly towards a new genre of film-making - one that only none can understand. The movie apparently traces the life of Dawood, but unlike the D-man, fails on many fronts.

'D' is the world of Dishu (Randeep Hooda) and in the world of Dishu nobody shaves, bathes or, as if to safeguard against being clichéd, speaks. Especialy Dishu. And 'D' is the story of how Dishu makes business out of crime, and, perhaps, how Randeepa Hooda makes a crime out of acting.

Dishu is fresh from Dubai, in Mumbai for his mother's funeral. He rubs shoulders with killers in local trains, gets his scooter repaired, witnesses a couple of murders, and sits around. And never ever speaks more than 2 words at a time.

Soon, he's decided over a career - being a gangster. The rest, as they say, is history - he kills, kills and kills, and commits many to history. His repertoire includes politicians, dons, film-stars, policemen, and anybody else who could have been squeezed into the 2-hour movie - remember, he has to use up all the 1,001 bullets.

All the above hard work requires Dishu to wear only a poker face, but as his score increases, the Ray-Bans do, too. All the scenes involving him might as well have been shot together - if you have seen 5 secs of him, you've seen what he will be doing for the next 2 hours. But then he had very little "say" in the matter.

The moviemakers were assuming either that we are well-versed with the ledgers of the 'D' Company, or that we can be intimidated into enlightenment. No insight is given into Dishu's mind, and only some is given on Rukhsar's body. The extreme rigidity of her lead man made Rukhsar desperate enough to do a romantic, if unmusical, number with Rajpal Yadav. There is just one other screaming number, but then the music had another purpose to serve - camouflaging the dialogues.

A special effect, seen for the first time in the history of Indian cinema, is, no, not graphics or action sequences, but the timeliness of the background music. Whenever Dishu or his chums speak over 2 sentences, the music takes over, saving them from giving logical conclusions to phrases like Chuna Do, Shaadi Karegi and Nazar Rakho.

Chunky Pandey, as Dishu's buddy Raghav, is the only saving grace. Goga Kapoor, as aging don Hashim, has certainly usurped the acting arena. Isha Koppikar, even in a cameo, has again proved that, (a) she can wash dishes, and (b) she can act.

This is one movie nobody can attempt writing a spoof of, as it is itself a spoof of all the gangster movies ever made.
Share. Save. Connect.
Tweet
D SNAPSHOT

See D full details
D USER REVIEWS
1 - 12 OF 12 COMMENTS
POSITIVE  |  NEGATIVE |  NEWEST  |  OLDEST  |  MOST HELPFUL  |  LEAST HELPFUL
USER RATING
7.9
57 USERS
Performances
Script
Music/Soundtrack
Visuals
NA
NA
NA
NA
Can watch again - NA
Good for kids - NA
Good for dates - NA
Wait to rent it - NA
Archana M on 30th Sep 2005, 1:57am | Permalink
i havent seen the movie but please stop these female bashing. one guy starts off and everybody jumps on the bandwagon blabbering about women not reviewing a movie. it might be fun talk over a few glasses of booze on a guys night out at a pub but please keep it off the website cause i believe its a decent one with sober people who have a life and opinion beyond male bonding!
RATING
6
Priti on 14th Jun 2005, 12:54am | Permalink
people who say this movie is anything more than mediocre are gravely opinionated. that is good, that is their opinion, their view. hence is that of the reviewer. stop cribbing at the reviewers.
RATING
6
Dipankar Talukdar on 8th Jun 2005, 9:41pm | Permalink
There was no need for Ram Gopal Verma to make 'D'. Satya and Company were much better.
RATING
4
Ramesh V on 6th Jun 2005, 10:39am | Permalink
boss please dont send females toreview gangsta movies fullhyd..this movie is decent and the hero is top class...
RATING
6
Himabindu K on 5th Jun 2005, 11:15am | Permalink
I think the reviewer doesnt like violent films, which is why she gave a bad rating. It is actually a well made film and deserves at least three stars. Randeep Hooda turns in a fine performance and suitably underplays it.
RATING
6
RamGopal Varma on 5th Jun 2005, 12:30am | Permalink
Will Someone Tell the Reviewer that the Hero's Name is RANDEEP HOODA & NOT Pradeep/Pradeepa Hooda!!!
RATING
10
Andy S on 4th Jun 2005, 11:06pm | Permalink
PUBLIC APPEAL:

DO NOT GO BY THE REVIEWER'S OPINION. THIS IS A GOOD MOVIE.

Ghazala-ji, please do us a favor and stop reviwing any movie that doesnt have 2 songs in switzerland, a weepy heroine and a 'cho-chweet' wimp for a hero.

Next Time around,when any Gangsta Flick needs to be reviewed,get Pritam to Do it or I may Even Do it for Free.

ADVERTISEMENT
This page was tagged for
d company hindi movie
d 2005 hindi movie full
D hindi movie
D reviews
release date
Follow @fullhyderabad
Follow fullhyd.com on
About Hyderabad
The Hyderabad Community
Improve fullhyd.com
More
Our Other Local Guides
Our other sites
© Copyright 1999-2009 LRR Technologies (Hyderabad), Pvt Ltd. All rights reserved. fullhyd, fullhyderabad, Welcome To The Neighbourhood are trademarks of LRR Technologies (Hyderabad) Pvt Ltd. The textual, graphic, audio and audiovisual material in this site is protected by copyright law. You may not copy, distribute, or use this material except as necessary for your personal, non-commercial use. Any trademarks are the properties of their respective owners. More on Hyderabad, India. Jobs in Hyderabad.