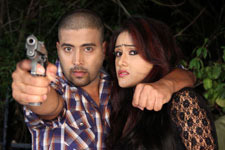 Deepa Garimella / fullhyd.com
EDITOR RATING
1.0
Performances
Script
Music/Soundtrack
Visuals
1.0
1.0
1.0
1.0
Suggestions
Can watch again
No
Good for kids
No
Good for dates
No
Wait to rent it
No
The makers have been screaming from the rooftops about how Akash's multiple getups in Mr. Rajesh are a big deal. Apparently, the feat broke records of some sort. As it turns out, enduring the movie can get you into the record books, too. For being able to speak at the end of it all.

We're not exaggerating. Mr. Rajesh is easily among the worst movies that ever saw the light of day. Centred around a murder, it mixes romance, violence, quirkiness and sleaze, in healthy amounts, intelligence completely subtracted, to give you a loaded yet light-weight thriller. All made in a budget of Rs. 5,000. That includes the two wigs worn by the multi-faceted hero.

A family has been murdered somewhere in the outskirts of town, and the killer is on the run. In a dhaba nearby, a bunch of miscellaneous characters have congregated. All of them look retarded, and behave accordingly. Many of them are Akash in different roles.

A rude, shaven-head Akash walks in, demands food and does not show his ID. The police automatically assume he killed the family above. But thanks to his vile temper, he shoots the cop and a couple of others.

A London-returned Akash walks in, with a wig that looks like a carpet threw up all over him, and an accent that sounds like he's throwing up. He somehow randomly thinks the psycho in the dhaba is Mr. Rajesh, the killer he had hired to snuff out his brother's family (the one that was murdered in this story), and proceeds to pay him.

But Mr. Psycho says he's not Mr. Rajesh. Mr. NRI could have just nodded and walked away with his briefcase of money. But no. He decides to tell everyone why he wanted his brother's family dead. A story is then stuffed into our faces - something about a live-in girlfriend and a dimwitted maradalu, a power plant project, the girlfriend's rich dad, some family property etc.

What transpires next is stupidity and madness of the third degree. Mr. Psycho is very concerned about the family's murder. He weeds out "suspects" at the dhaba one by one, and anyway shoots them down (some tripe about him having a good heart). This he does until he zeroes in on the culprit.

The story is as enjoyable as eating footwear. The characters are all unpleasant, noisy, dumb and annoying. Some, of course, are more irritating than the rest. One particular nut, a movie-actor-type, keeps talking loudly and abusing people, in an apparent bid to lighten the mood.

There's also the sleaze factor that many of these small-time films seem to be at ease depicting. 95% of the men in the story specialize in feeling up the women, or at least, expressing their desire to do so. These acts of love/lust/leering are depicted pretty crudely. The dim lighting doesn't help at all.

In fact, most of the movie is shot indoors in bad lighting. The production values are so abysmal you wonder if Akash did his make-up all by himself. Without a mirror. Or a make-up kit.

We're not completely sure if Akash was a decent actor earlier, but in Mr. Rajesh, he's pretty sad. His idea of acting chops involves making strange stretching jaw movements and running his fingers tightly over his face.

Mr. Rajesh is one big practical joke masquerading as a real film. We're not sure who the joke's on, though.
Share. Save. Connect.
Tweet
MR. RAJESH SNAPSHOT 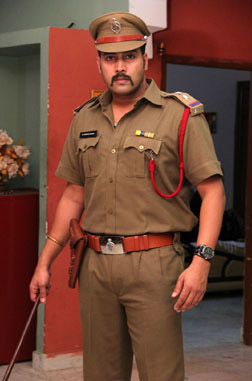 See Mr. Rajesh full details
MR. RAJESH USER REVIEWS
1 - 2 OF 2 COMMENTS
POSITIVE  |  NEGATIVE |  NEWEST  |  OLDEST  |  MOST HELPFUL  |  LEAST HELPFUL
Meursault on 29th Apr 2013, 10:07am | Permalink
Kudos to the commitment of this site and its reviewer for being so sincere and dedicated to the job. Everyone concentrates upon socalled big star movies or any movie which is hyped , but taking a note about the release and existence of movies like these , taking pains to go to the theaters they are playing in , subjecting one self to all the mediocrity / absurdity , and then writing a decent length of review , all shows finest level of professionalism and dedication.
if every news paper , website , maintains this kind of objective journalism , ...oh...may be I am day dreaming.
I still cannot believe this level of sincerity in the society we live in. You have made my day guys. thanks you and keep it up.
Mahesh on 28th Apr 2013, 4:42pm | Permalink
I think the above review is written by someone who is jealous of Hero Akash. because, we saw the movie on Friday evening with hopefull theatre at Usha Mayoori, and everyone enjoyed the movie and Akash has done an excellent job. we have to be proud that one of our Telugu hero created records. hats off Akash.
LEAVE A COMMENT
fullhyd.com has 700,000+ monthly visits. Tell Hyderabad what you feel about Mr. Rajesh!
MORE MOVIES
Latest Reviews
SR Kalyana Mandapam
Ippudu Kaaka Inkeppudu
Thimmarusu
Kadhanika
Shukra
more
Deyyam - 2021
Tempt Raja
Vakeel Saab
Wild Dog
Sulthan (Telugu)
Sulthan
Rang De (Telugu)
Saina
Aranya
Chaavu Kaburu Challaga
Contemporary Reviews
Iron Man 3 (3D)
Iron Man 3 (Hindi)
Iron Man 3 (Telugu)
Shootout At Wadala
Bombay Talkies
more
Chhota Bheem And The Throne ...
Greeku Veerudu
Shadow (Telugu)
Shree
Aashiqui 2
Iron Man 3
The Croods
Scary Movie 5
Chinna Cinema
Random Reviews
3 Deewarein
Adhipathi
Bad Boys
Qayamat
Sins
more
Khosla Ka Ghosla
Okkadunnadu
Arundhati
Up In The Air
Zabardast
Nuvve Naa Bangaram
Gayakudu
Mohenjo Daro
Malli Raava
Spider-Man: Far From Home (T...
SEARCH MOVIES
Dissatisfied with the results? Report a problem or error, or add a listing.
ADVERTISEMENT
SHOUTBOX!
{{todo.name}}
{{todo.date}}
[
ip{{todo.ip}}
]
{{ todo.summary }}... expand »
{{ todo.text }} « collapse
First  |  Prev  |   1   2  3  {{current_page-1}}  {{current_page}}  {{current_page+1}}  {{last_page-2}}  {{last_page-1}}  {{last_page}}   |  Next  |  Last
{{todos[0].name}}

ADVERTISEMENT
This page was tagged for
Mr. Rajesh telugu movie
Mr. Rajesh reviews
release date
Akash, Sony Charishta
theatres list
Follow @fullhyderabad
Follow fullhyd.com on
About Hyderabad
The Hyderabad Community
Improve fullhyd.com
More
Our Other Local Guides
Our other sites
© Copyright 1999-2009 LRR Technologies (Hyderabad), Pvt Ltd. All rights reserved. fullhyd, fullhyderabad, Welcome To The Neighbourhood are trademarks of LRR Technologies (Hyderabad) Pvt Ltd. The textual, graphic, audio and audiovisual material in this site is protected by copyright law. You may not copy, distribute, or use this material except as necessary for your personal, non-commercial use. Any trademarks are the properties of their respective owners. More on Hyderabad, India. Jobs in Hyderabad.