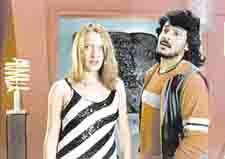 Manju Latha Kalanidhi / fullhyd.com
EDITOR RATING
5.0
Performances
Script
Music/Soundtrack
Visuals
NA
NA
NA
NA
Suggestions
Can watch again
NA
Good for kids
NA
Good for dates
NA
Wait for OTT
NA
Three Upendras and a monkey come together to make Tollywood's most offbeat movie of the year, Hollywood - a Telugu movie made with Kannada actors and shot in Hollywood. Seriously, to give the Devil and the monkey its due, Hollywood is indeed a daringly 'wonder'ful movie for several reasons. It casts Upendra in three roles including an android robot; it pits a monkey against him; and it is a science fiction movie without many special effects.

Shot entirely in Hollywood with a tiny star cast of five and based on the Frankenstein monster, the movie actually treads a new path. It is an experiment in filmmaking, both for its plot and the manner it is done in. Upendra, a big name in Kannada, is a maverick with movies like A, Raa and Stupid to his credit. Even though he leaves no stone unturned about being in every frame of the movie and in having no qualms about his looks, his bold attempt is definitely worth a look.

Upendra plays a lovelorn boy Surendra who can do anything to get Manisha (Felicity Mason) to love him. Desperate to impress her and unable to do so himself, he seeks the help of his maverick scientist professor (Anant Nag). The mad prof comes with a clone of Surendra who will do the bit of impressing Manisha, and once the task is accomplished, the real Surendra will take over.

However, things go berserk after the prof gives Surendra's clone - an android robot actually - the ability to think and act like humans. He bestows the clone named US 47 with human discretion and human emotion. Only, these emotions and thinking pattern can be reconfigured by reprogramming his brain.

The idea of the clone backfires when US 47 starts using his discretion and actually falls for Manisha. Using his android strength and human intelligence and of course help from a lab monkey, US 47 proves to be formidable enemy to the rest of the cast. Now the mad prof, Surendra, his twin brother Upendra and Manisha need to get together to solve the problem.

Getting a monkey to star against him is one wonder and getting a Hollywood dame to act has love interest is yet another achievement. But then he pulled it off, right? So two stars for Hollywood there.

Upendra looks no better from any of his previous movies. He sports the same unwashed hair and the same ridiculous clothes, and adds his own style, making him a deadly combination. The monkey too gets equal footage. However, the ape gets on to your nerves when it starts swearing and uses all the permutations and combinations of the Telugu equivalent of 'my son'. How it passed the censors is another coup Uppi pulls off.

The movie is essentially for three kinds of audiences: fans of Upendra, fans of the monkey and fans of filmi experiments. Technically, it all boils down to the same but you can watch Hollywood if you belong to any of these categories.
Share. Save. Connect.
Tweet
HOLLYWOOD SNAPSHOT

ADVERTISEMENT
This page was tagged for
Hollywood telugu movie
Hollywood reviews
release date
Upendra, Felicity Mason
theatres list
Follow @fullhyderabad
Follow fullhyd.com on
About Hyderabad
The Hyderabad Community
Improve fullhyd.com
More
Our Other Local Guides
Our other sites
© Copyright 1999-2009 LRR Technologies (Hyderabad), Pvt Ltd. All rights reserved. fullhyd, fullhyderabad, Welcome To The Neighbourhood are trademarks of LRR Technologies (Hyderabad) Pvt Ltd. The textual, graphic, audio and audiovisual material in this site is protected by copyright law. You may not copy, distribute, or use this material except as necessary for your personal, non-commercial use. Any trademarks are the properties of their respective owners. More on Hyderabad, India. Jobs in Hyderabad.