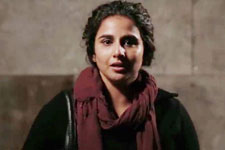 Ajay Kumar R / fullhyd.com
EDITOR RATING
5.0
Performances
Script
Music/Soundtrack
Visuals
7.0
5.0
5.0
7.0
Suggestions
Can watch again
No
Good for kids
No
Good for dates
No
Wait to rent it
Yes
Sujoy Ghosh's highly engrossing 2012 film Kahaani was cerebral, intellectually stimulating and methodically crafted, to say the least. We'd said then that Sujoy Ghosh might well become the next Satyajit Ray provided he remained consistent in his art of storytelling. Ghosh indeed tries to recreate the riveting thriller in Kahaani 2. But, of course, not all follow-ups have (or need to have) the same impact as their originals.

Vidya Sinha (Vidya Balan) adopts a sexually abused orphan, 14-year-old Minnie (Tunisha Sharma), after meeting her when the latter was six (played by Naisha Khanna), and finding that she has been periodically molested by her uncle Mohit (Jugal Hansraj). After a lot of struggles, heart-pounding thrills, a violent confrontation with an officer and an accidental death, Vidya rescues Minnie from the savage. And time flies by.

Nine years later, Minnie - who has been paralysed waist-down ever since the rescue - is kidnapped. In a fit of fear and trepidation, Vidya rushes in to the busy streets of Chandanpur to save her daughter, but in the process meets with a gruesome accident which causes her to slip into temporary Coma. The hospital registers an accident case, but the cops, in a twist of events, identify her as the kidnapper of 6-year-old Minnie from nine years ago, and place her under custody on her hospital bed.

The case is then partially handed over to SI Inderjeet Singh, a.k.a. Inder (Arjun Rampal), for official reasons. And Inder, despite the almost disfigured face of Vidya, identifies her as Durga Rani Singh - someone from his past.

Kahaani 2 ponders extensively on child sexual abuse victims and their psyche. Protagonist Vidya reminds you time and again that Minnie is, in a way, a reflection of herself and the physical abuse she herself dealt with during her childhood. Vidya can perfectly empathize with Minnie, and thus assumes responsibility of the girl. She also almost instinctively guesses Minnie's dilemma when the latter talks about it cryptically.

The movie also sheds light on a common dilemma that a child who hasn't attained the age of reason yet faces when being abused - the difference between love and molestation is a blur for them. This confusion and innocence is enacted flawlessly and naturally by 7-year-old actor Naisha Khanna.

But amid all its good intentions and bold portrayal of a highly sensitive issue, Kahaani 2 compromises on the one factor that decided the fate of its predecessor at the BO - a twist that can render you ambushed. The original Kahaani's twist at the end was crafted so well that those five minutes outweighed the rest of the film. Its deliberate misleading of its audiences until then was chiselled to perfection.

But Kahaani 2's denouement cannot match that epic grand revelation. This film adds a plot twist for the heck of it, and you can predict the ending 15 minutes earlier. It also doesn't leave anything to the imagination, making this a kahaani devoid of substance or mystery.

But enough with the rant. Vidya Balan once again shows you that she is one of the few actresses in Indian cinema who can carry an entire film on her shoulders without requiring a male protagonist in a strong role. Balan and the two editions of Kahaani transcend gender boundaries and stereotypes, making them enjoyable and inspiring affairs for both the sexes. However she doesn't quite deliver her best in a scene towards the end, where her acting feels a tad artificial.

Arjun Rampal pulls off a smart and gutsy cop with a sense of humour, seamlessly. His wit is overcome only by his charm. However Inderjeet is not an impactful role and is something the movie could do without. Manini Chada as Inder's wife deserves a mention for defusing the panic the story creates now and then with her joyous expressions and dialogue delivery.

Clinton Cerejo's soundtrack and music do not match up to Kahaani's Vishal-Shekhar, but still add the tension necessary for the tone of the movie. Tapan Basu plays around with the cinematics and gives you a gritty, grim and raw Kolkata in yellow hues.

While Kahaani 2 isn't a sequel to Kahaani, it sets certain expectations by using the name, and that makes its failure in making a lasting impression or rendering a chilling experience for lovers of twists, turns and mind-numbing thrills stark. You can still watch it for Balan and Khanna, and for the message.
Share. Save. Connect.
Tweet
KAHAANI 2 SNAPSHOT 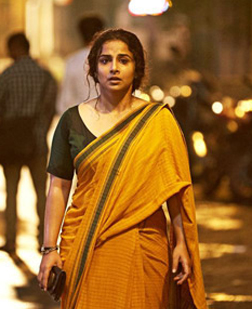 ADVERTISEMENT
This page was tagged for
Kahaani 2 hindi movie
Kahaani 2 reviews
release date
Vidya Balan, Arjun Rampal
theatres list
Follow @fullhyderabad
Follow fullhyd.com on
About Hyderabad
The Hyderabad Community
Improve fullhyd.com
More
Our Other Local Guides
Our other sites
© Copyright 1999-2009 LRR Technologies (Hyderabad), Pvt Ltd. All rights reserved. fullhyd, fullhyderabad, Welcome To The Neighbourhood are trademarks of LRR Technologies (Hyderabad) Pvt Ltd. The textual, graphic, audio and audiovisual material in this site is protected by copyright law. You may not copy, distribute, or use this material except as necessary for your personal, non-commercial use. Any trademarks are the properties of their respective owners. More on Hyderabad, India. Jobs in Hyderabad.