Land Of The Dead Review 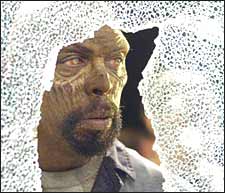 Priyanka Pulla / fullhyd.com
EDITOR RATING
3.0
Performances
Script
Music/Soundtrack
Visuals
NA
NA
NA
NA
Suggestions
Can watch again
NA
Good for kids
NA
Good for dates
NA
Wait for OTT
NA
George A Romero apparently makes social satires with zombies as actors. And there's a lot else in this movie too. It's one in a series of movies of which "Night Of The Living Dead" is a part, and that original spawned a genre in its wake. So this isn't a movie you can lightly dismiss. It has a cult, followings, discussion boards, groups, literature, accessories, gags, toys and clothing inspired from it, and people flocking to theaters everywhere to catch this latest-in-line in the series.

That is probably why, to a newcomer like me, Land Of The Dead comes across as such a ridiculous, confounding, great-big goose egg. I guess when a story becomes too old, and has been told enough times already, people stop questioning it and it becomes... well... like a bureaucracy. Unless you know the history of every damn part, you have no clue what it's hanging around there for.

Land Of The Dead has a bunch of humans living on a tiny bit of safe sanctuary, surrounded completely by zombies who are held back by electric fences. Oh yes - it is one of THOSE movies. The kind of movie that is set in abhorrent blood and gore, maggots, body-part stumps, organs whipping in the air like Diwali fireworks, intestines trailing, spilling blood behind... you get the idea. Once you get used to it in scene 1, it never gets any better, or any worse.

The movie itself is like an exhibit at a museum of cultures: a peek into the Zombie world. Zombie rituals, Zombie meals, Zombie weapons, Zombie fighting techniques etc. If that's what you are interested in watching, go watch this movie by all means. If you are looking for a story and some genuine scares, you are definitely not getting them here.

Anyway, so there is this big armored tank called the Dead Reckoning that scouts into Zombie land everyday, to recover food and drink. It is manned by Riley (Simon Baker) and his troops who are really good at pressing the right buttons on it to shoot off a variety of weapons. Fire balls, knives and bullets that can burn, chop and bore holes through the zombies, whichever satisfies them the most. So they go out on their expeditions every once in a while, and we witness random, unconnected scenes of zombie killings that are probably the greatest reward of this movie, at least for the typical Land Of The Dead fan.

Next there is Cholo (John Lequizamo), who falls out with the autocrat in the human island and steals the big tank to get his revenge. So he sets off into Zombie land, and is followed by Riley and his team, and we get to see some more zombie heads flying. Thus, we are transported from one sequence of living-dead extermination to another, punctuated by little events that provide breaks and catalysts. But the movie, essentially, is about killing zombies, and like I said, nothing more and nothing less.

Anyway, what happens next is that the zombies make a plan to take over the people-reserve and develop new skills like swimming in water and using machine guns. This done, they set out to attack the humans in hordes. And guess what happens next? More spook carnage.

This is the single monotonous vein in which the entire movie carries on, no exaggeration there. When one thinks of the success of its predecessor movies, one is forced to conclude there must be some human instinct that recognizes and validates the concept of the Zombie and derives a deep satisfaction in its fantasized destruction. Land Of The Dead makes this fantasy come alive, but blessedly stops after 1½ hours.

The rampaging corpses are banished for good and start making a mysterious exodus to someplace else while the only real humans in the entire theater begin to exit noisily in similar relief.

The movie, in sum, bears a weird half complete look, almost as if Romero was forced by fan pressure to set out making it although he was quite out-of-gas himself. The claret is sickening and gruesome, and serves better as an appetite killer than as something scary. The zombies and the living look indistinguishable, given the awful print. And the dialogues seem like they were written through a heavy dose of Valium.

To put it simply, if there was ever a movie just perfect for giving a skip, Land Of The Dead is it. Do it and discover the curiously unusual sense of satisfaction you can get only from passing up an unequivocally passable-up movie.
Share. Save. Connect.
Tweet
LAND OF THE DEAD SNAPSHOT

ADVERTISEMENT
This page was tagged for
Land Of The Dead english movie
Land Of The Dead reviews
release date
Simor Baker, Dennis Hopper
theatres list
Follow @fullhyderabad
Follow fullhyd.com on
About Hyderabad
The Hyderabad Community
Improve fullhyd.com
More
Our Other Local Guides
Our other sites
© Copyright 1999-2009 LRR Technologies (Hyderabad), Pvt Ltd. All rights reserved. fullhyd, fullhyderabad, Welcome To The Neighbourhood are trademarks of LRR Technologies (Hyderabad) Pvt Ltd. The textual, graphic, audio and audiovisual material in this site is protected by copyright law. You may not copy, distribute, or use this material except as necessary for your personal, non-commercial use. Any trademarks are the properties of their respective owners. More on Hyderabad, India. Jobs in Hyderabad.