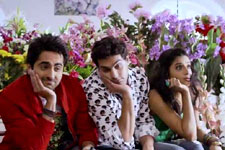 Kritika Deval / fullhyd.com
EDITOR RATING
6.0
Performances
Script
Music/Soundtrack
Visuals
7.0
6.0
6.0
7.5
Suggestions
Can watch again
Yes
Good for kids
No
Good for dates
Yes
Wait for OTT
No
The effects of good cinema, a bar of smooth chocolate, and a teensy-weensy crush are startlingly similar. All three of them leave you with a smile on your face, an earworm you actually want, and a general feeling that life is good, if only for a short time.

It is in this state of ephemeral euphoria that we write about Nautanki Saala, so please forgive us our gushing, for the movie is by no means perfect. The usual suspects - i. e. poor logic, a tiresome character and a half, a few loo breaks where there shouldn't be any - all rear their less-than-pleasant-to-behold heads. Where Nautanki Saala rises from the generic pool of Hindi rom-com, though, is in how irrelevant it eventually renders said suspects. All you recall once you leave the theatre is all the effervescent nautanki, and the pleasantly insidious tune of "Tu bhi draamebaaz, main bhi draamebaaz".

Set in the imaginatively-rendered chaos of the Mumbai theatre scene, Nautanki Saala is a quirky combination of bromance and romance. Ram Parmar (Ayushmann Khurrana) is an actor and director of a popular play called Ravanleela, in which he plays (guess!) Ravan. An inveterate Good Samaritan with an incorrigible tendency to infuse play-acting into every frame of life, Ram one day rescues Mandar Lele (Kunaal Roy Kapur) from the brink of suicide, and decides to do all he can to help him.

But then, there are hurdles galore. For one, Mandar is depressed, kinda pathetic, and to top it all off, a shit actor. For another, he's in love with an utterly insipid manikin called Nandini Patel (Pooja Salvi). This is a problem because Nandini is engaged to be married to Loli, who, in his turn, is exchanging saliva with a random bimbo about whom the only thing you'll remember is a huskily whispered "Loli, please go slowly". Soon, though, Ram is the one exchanging saliva with Nandini. But, wait, didn't Ram have a harridan of a fiancée?

Who really cares? In this comedy of errors, you're too busy laughing at the comedy to be bothered much by the errors.

Although a fair share of the funnies arises from the slaptstick and the border-line crass, most of the humour is rather tongue-in-cheek, the actors inviting you to laugh with them as much as at them. Smooth dialogue and slick delivery prop up the plot whenever it sags, which it does quite often.

Khurrana and Kapur, with a little help from a South-Indian stereotype of a producer, are what keep you entertained throughout the highs and lows of the plot. Khurrana's flair for understated overacting is effectively utilised in the movie, as is his seamless timing. And the man can sing, too. Kapur, on the other hand, gives a surprisingly nuanced performance, and is eventually the funnier of the two.

The biggest grouse we carry is against something that is common to most male-centric Indian comedies - the fact that the characters of the women in the movie are as fleshed-out as the size-zero persons of the women portraying them, which is, not at all. They're either shrill man-eaters, or bimbos with absolutely no will. And then, there is the fact that we have no idea why the people are falling in love with each other. We get where and when, but not why or how.

None of this however ultimately distracts you from being entertained by the light heart and the surefootedness of the humour surrounding an eventually hollow sequence of events.

Rohan Sippy does a great job with the settings and the costumes, and shows an attention to detail that is characteristic of all good comedies. The camera is almost a living thing that works to elicit laughs alongside the leading men. The music is better than most of what has been coming out of Bollywood lately, which is good, because you'll be hearing a lot of it.

And, at the end of it all, there's that I-just-saw-a-good-movie buzz that'll last at least the amount of time you spent watching the movie.
Share. Save. Connect.
Tweet
NAUTANKI SAALA SNAPSHOT 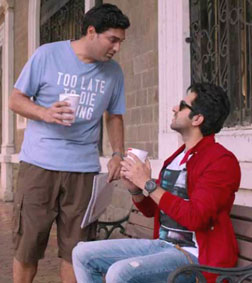 ADVERTISEMENT
This page was tagged for
the nautanki saala! movie in hindi
Nautanki Saala hindi movie
Nautanki Saala reviews
release date
Ayushmann Khurrana, Kunaal Roy Kapur
Follow @fullhyderabad
Follow fullhyd.com on
About Hyderabad
The Hyderabad Community
Improve fullhyd.com
More
Our Other Local Guides
Our other sites
© Copyright 1999-2009 LRR Technologies (Hyderabad), Pvt Ltd. All rights reserved. fullhyd, fullhyderabad, Welcome To The Neighbourhood are trademarks of LRR Technologies (Hyderabad) Pvt Ltd. The textual, graphic, audio and audiovisual material in this site is protected by copyright law. You may not copy, distribute, or use this material except as necessary for your personal, non-commercial use. Any trademarks are the properties of their respective owners. More on Hyderabad, India. Jobs in Hyderabad.