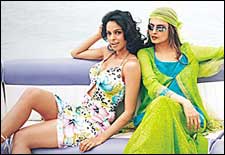 Ghazala Rizvi / fullhyd.com
EDITOR RATING
3.0
Performances
Script
Music/Soundtrack
Visuals
NA
NA
NA
NA
Suggestions
Can watch again
NA
Good for kids
NA
Good for dates
NA
Wait for OTT
NA
It boils down to one basic question: how do you like your Mallika Sherawat, dressed or undressed? If undressed, which incidentally happens to be the right answer, then we have some bad news for you - in spite of the heartburn it might have caused her, she has managed to keep bits and pieces of human clothing attached to herself, throughout Bachke Rehna Re Baba.

It is also unfortunate for us, as we can't say that while the scriptwriters for Bachke Rehna Re Baba were translating a movie called Heartbreakers word for word, they didn't do a thorough job of it. Bachke Rehna Re Baba is a study in the meticulous art of copy-wronging; guilty of only a few adjustments, like the addition of songs and the subtraction of the female cast's clothes.

It may not classify as an adult version of Heartbreakers, but then it just might - the original had two 30 second kiss-scenes, this one has four; and Jennifer Hewitt's cleavage, though amply displayed in Heartbreakers, can't drive Mallika out of business, not any day.

The story is about Rukmini (Rekha), virtuoso mausi, and Padmini (Mallika), the apprentice niece. Together they practice the art of extricating mankind from the burden of their worldly possessions - aided by the fact that middle-aged men, swathed in their plump mid-sections and baggies, make excellent sitting ducks.

Their ruse is to lead a man into marriage (to Rukmini), then into adultery (with Padmini), and then follow it up with a good, knockdown, drag-out marital dispute - all this ending in his being stripped by a hefty alimony settlement.

They pull off one on Monty (Paresh Rawal), and then shift turf to Mauritius. Here they find Mansukhnani (Satish Shah), a stoic Sindhi rolling in the dough. Awed by his palatial house, Rukmini gets all set to kiss even his gutka-stained gums. Padmini, in the meantime, is running her own crash course on the art of kissing, with Raghu (Karan Khanna) as her diligent student.

But when Mansukhnani kicks the bucket sooner than expected, Raghu, the owner of a Rs. 3 crore property, starts shining brightly over their gloomy horizons. They go for him, and this time they are aided by Monty, who wants his money back.

Rekha and Mallika, between themselves, display enough cleavage and scarlet pouts. However unbelievable it might sound, the odds that you can actually doze off or leave the theater are actually real. Govind Menon chose to add a good measure of vagueness to all the acts of con, stripping them of any logic which might have spiced up an otherwise dispirited presentation.

Intelligent as she is (ever seen her on talk shows fighting out coolly with thawed politicians?), Mallika is well aware which way the money mills churn, and uses her body as a successful decoy for her acting. Rekha consistently refuses to be yellowed by age. Comedy, though, is not her forte. She looks overdressed, and in a few scenes is outright scary in her glad rags.

Satish Shah has delivered one of his career's best. For Paresh Rawal, it is a downhill move from Hungama and Hera Pheri. For Karan Khanna, it's an uphill task, perhaps over a mountain which has no peak in its landscape.

The music by Anu Malik, barring Tera Husan, does discredit to him; but then, perhaps the songs were not meant to be heard but only seen. Bachke Rehna Re Baba is a movie that you can watch once, if only you are not in the mood to rent a CD of Heartbreakers.
Share. Save. Connect.
Tweet
BACHKE REHNA RE BABA SNAPSHOT

ADVERTISEMENT
This page was tagged for
Bachke Rehna Re Baba hindi movie
Bachke Rehna Re Baba reviews
release date
Rekha, Mallika Sherawat
theatres list
Follow @fullhyderabad
Follow fullhyd.com on
About Hyderabad
The Hyderabad Community
Improve fullhyd.com
More
Our Other Local Guides
Our other sites
© Copyright 1999-2009 LRR Technologies (Hyderabad), Pvt Ltd. All rights reserved. fullhyd, fullhyderabad, Welcome To The Neighbourhood are trademarks of LRR Technologies (Hyderabad) Pvt Ltd. The textual, graphic, audio and audiovisual material in this site is protected by copyright law. You may not copy, distribute, or use this material except as necessary for your personal, non-commercial use. Any trademarks are the properties of their respective owners. More on Hyderabad, India. Jobs in Hyderabad.