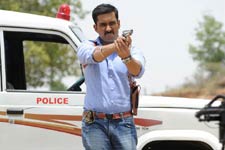 Kritika Deval / fullhyd.com
EDITOR RATING
1.0
Performances
Script
Music/Soundtrack
Visuals
4.0
3.0
2.0
1.0
Suggestions
Can watch again
No
Good for kids
No
Good for dates
No
Wait to rent it
No
It is a popular belief that whatever happens on Ugadi is a good indicator of how things are going to stand for the following twelve months. For the sake of Uday Kiran, and the senses of the average audience, we really hope that that is not so. The violence done unto the latter by the violence perpetrated by the former is can hardly be borne for five minutes, let alone a whole year.

We aren't too sure if this is actually a movie, or just Madame Providence exercising her (rather lame) sense of humour by accidentally dropping a Hollywood-style slasher into a Telugu soap opera and turning him into the "hero".

If you really have to know, the object of the above rant comes supported by a story, and, as far as we, the hapless viewers, could figure out, it goes somewhat like this. Sriram Srinivas is an unofficial exterminator of evil in the police force. He likes to kill crooked cops, and he gets creative, too.

Bags of coins, alcohol, biryani and sweets are just a few of his numerous weapons of choice. In any other scenario, he would've been branded a rather Quixotic serial killer, and that would be that. But since this is a Telugu movie, and he is the hero, he gets a tragic back-story to explain his quirks.

And then, there is Reshma (Reshma), a girl who was introduced to us via a dance number that would put many an item-girl to shame, and to Sriram, holding a gun with which she can't shoot straight even point-blank. What is astounding is why Sriram refrains from shooting her, especially when he seems so capable of it, and when the girl spends an astonishing amount of time within point-blank range. That seemed to us a pretty good solution to shut a trap that keeps emitting continuous, shrill and utterly puerile noises.

What is even more astounding is how it never occurred to a man of his creative capabilities to lock his next venal victim up with the girl and just let her talk him to death.

So, why does Sriram go around killing people? What on earth is Reshma doing in the jungles enroute to Goa? Wait. Did we mention Goa? Oh yeah, half the movie is shot in Goa, thus ruining that wonderful world of whoopee for all those fool enough to remain in the theatre, or like us, unfortunate enough to have been constrained to do so. So, coming back to the "?"s of Jai Sriram, what on earth is that back-story? Well, you shouldn't wait to find out.

In fact, you should stay away from this movie entirely. Those expecting at least a little bit of a good time, and a respite from the scouring heat outside, will end up with a headache much worse than the sun would have caused.

Why, you ask? Really? You need more reasons? Whoever created the sound for this one probably had one too long a conversation with Reshma, the character, and, with his hearing thus impaired, inadvertently decided to impair ours. The camerawork and the editing was obviously done by bonobos on psychedelic drugs. What you see hurts as much as what you hear.

And, we refuse to talk about Uday Kiran and his performance. The guy seems to be aware enough of the depths he's wading through.

So, just do yourself a favour, sit at home, and watch Ugadi programs as you sip an icy-cool glass of Rooh Afza. Leave non-movies like this one to people like us, who have no choice.
Share. Save. Connect.
Tweet
JAI SRIRAM SNAPSHOT 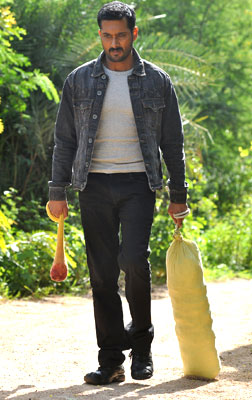 ADVERTISEMENT
This page was tagged for
Jai Sriram telugu movie
Jai Sriram reviews
release date
Uday Kiran, Reshma
theatres list
Follow @fullhyderabad
Follow fullhyd.com on
About Hyderabad
The Hyderabad Community
Improve fullhyd.com
More
Our Other Local Guides
Our other sites
© Copyright 1999-2009 LRR Technologies (Hyderabad), Pvt Ltd. All rights reserved. fullhyd, fullhyderabad, Welcome To The Neighbourhood are trademarks of LRR Technologies (Hyderabad) Pvt Ltd. The textual, graphic, audio and audiovisual material in this site is protected by copyright law. You may not copy, distribute, or use this material except as necessary for your personal, non-commercial use. Any trademarks are the properties of their respective owners. More on Hyderabad, India. Jobs in Hyderabad.