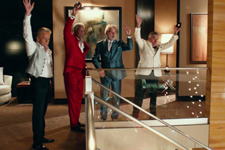 Nupur Barua / fullhyd.com
EDITOR RATING
5.0
Performances
Script
Music/Soundtrack
Visuals
6.0
5.0
6.0
6.0
Suggestions
Can watch again
No
Good for kids
No
Good for dates
Yes
Wait to rent it
Yes
Getting older is not as funny as Hollywood would have us believe at times. In fact, some of the humour that deals with sagging body parts and inability to hear or see may seem insensitive if you are slightly touchy, or old. However, it seems inevitable, when you have an ensemble cast of popular stars past their prime, to crack a few tactless jokes; otherwise it can get pretty grim.

Which is why Jon Turteltaub, the man who directed While You Were Sleeping, Phenomenon, and both the National Treasure movies, amongst others, decided to take The Hangover and mix in a bit of emotion and conflict, with old age, and prove that old age is not that tragic. Or is it?

Four friends and one girl in the late 1950s. The girl loves one of them, but marries another. They all grow older, and live separate lives, although they meet up often. Now, 58 years and various ailments and tragedies later, Billy (Michael Douglas) has an epiphany at a friend's funeral. He realises he is tired of being single (and scared of dying alone), and proposes to his much younger girlfriend. She accepts.

Billy then calls up his best friends, Archie (Morgan Freeman) and Sam (Kevin Kline), to let them know. Archie insists on a bachelor party at Vegas before the wedding.

The problem, as they realise, will be to get Paddy (Robert De Niro) to tag along. Paddy and Billy have not spoken in a while, and so the other two do not mention the latter to the former when they drag him out of his apartment.

All the way to Vegas, all Paddy does is crib about Billy, so when they meet at the airport, he is really worked up. Sam and Archie, however, want to have fun, and to give Billy a taste of all the good times that he has provided for them in the past, countless times.

So they decide to make the most of their time there (wine, women, gambling) - while Sam's wife has given him permission to fool around, Archie's paranoid son (Michael Ealy) is under the impression that his father is on a Church trip. In the meantime, history repeats itself when Paddy and Billy both find themselves falling for the same girl.

Las Vegas is no longer an exotic film destination, especially after The Hangover. It has been done to death - the getting away from it all, the partying, the mucking up, the realisations, and so on. It cannot get funnier than The Hangover, so everything else will be weighed against it, and then pale in comparison.

In reality, how much can an older man make a fool of himself without coming across as a desperate creep? Kevin Kline is no Bradley Cooper, for example, and therefore cannot be half as crazy, as a character. The antics then, although Cooperesque, are not as effective.

The story is not clear - is this about the relationship between Paddy and Billy, or about the friendship among the four of them? If it is the latter, then it is sadly relegated to the sidelines, with their adventures thrown in more for comic relief than for plotting points. Or it can be a coming-of-age movie in a way, in which these men finally mature at nearly 70 years of age.

The little romance that exists does not qualify as a romedy. Nothing revolutionary happens here, and the experiences in Las Vegas may as well have been located in any other city. Situations and their resolutions are predictable and convoluted.

The movie is a rather sad attempt to glorify some pretty irresponsible behaviour by the senior citizens. However, some of the dialogues are indeed downright funny.

All the main actors are jaded, and do not put in enough soul into their characters. Michael Douglas is too tanned and blond, and not quite as charming. Robert De Niro looks like he has come straight from the sets of Meet The Parents. Morgan Freeman tries a bit too hard to be cool.

Relatively, Kevin Kline seems to be having a blast. Jerry Ferraro, playing an obnoxious young man, is unconvincing. Mary Steenburgen is more of a prop, although she plays an important character.

The opening titles and the sequence that follows have some above average production design and costume design. The rest of the movie does not follow suit, however, and not much attempt is made to make the characters and the sets look anything more than common. One sequence towards the end sees all the characters pick out costumes for a party, but even with the slow motion ramp walk impersonation, they do not do much to impress. The cinematography is nothing spectacular, and some of the city shots can be replaced with shots from other movies dealing with Las Vegas.

Watch Last Vegas only if you are a fan of any, or all, the senior actors. This may not be their best work, but there is a sequel in the making, which may just prove to be more entertaining, at least in terms of story.
Share. Save. Connect.
Tweet
LAST VEGAS SNAPSHOT 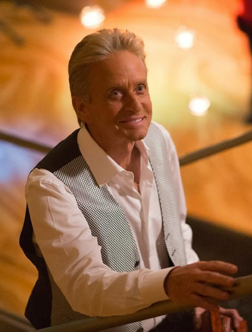 ADVERTISEMENT
This page was tagged for
Last Vegas english movie
Last Vegas reviews
release date
Michael Douglas, Robert De Niro
theatres list
Follow @fullhyderabad
Follow fullhyd.com on
About Hyderabad
The Hyderabad Community
Improve fullhyd.com
More
Our Other Local Guides
Our other sites
© Copyright 1999-2009 LRR Technologies (Hyderabad), Pvt Ltd. All rights reserved. fullhyd, fullhyderabad, Welcome To The Neighbourhood are trademarks of LRR Technologies (Hyderabad) Pvt Ltd. The textual, graphic, audio and audiovisual material in this site is protected by copyright law. You may not copy, distribute, or use this material except as necessary for your personal, non-commercial use. Any trademarks are the properties of their respective owners. More on Hyderabad, India. Jobs in Hyderabad.