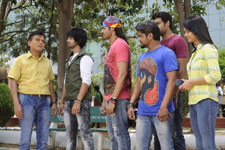 Kritika Deval / fullhyd.com
EDITOR RATING
2.0
Performances
Script
Music/Soundtrack
Visuals
3.0
2.0
4.0
4.0
Suggestions
Can watch again
No
Good for kids
No
Good for dates
No
Wait to rent it
No
Buckle up, people! It's time for the ultimate battle between rock and sastriya sangeetam. It's gonna be exciting. It's gonna rock your world. It's gonna... make you rue the day your embryonic cells multiplied to form your ears. And that, readers, is what happens when High School Musical goes Telugu.

Hyderabad's Rajdhani College is apparently the hallowed ground the city's resident rock "God" Sanjay! (Rahul) chooses to walk on. He's The Man!, and that gives his not-so-juvie delinquent pals (fuelled by the wildest fantasies of the minds behind the "story") the carte blanche to experiment with "funny" in ways that will cause joy to bubble up in the hearts of all budding criminals ever.

"Let's slip some booze into the glass of the teetotalling new girl chatting with the professor, n MMS videos of her making a fool of herself." "O God Of Rock! Why did we not think of something so obviously hilarious?"

"Let's... ummm... I Know! Let's do those things again! What could be funnier?" "We bow to the sense of humour you hide behind your wind-blown hair and stoner eyes."

Oh, yes, we remember we mentioned music. So, anyway, on the Rock side is proven non-champion Sanjay! (pause for applause), and on the Classical side is the teetotalling, langa-voni-donning new kid on the block the cool kids can't even rag, Pallavi (Kimaya), who has had years of training, and sings and plays the violin like an angel (pause for booooooooo!-s).

Sanjay! heads the selection of the team that goes to a state-wide inter-college competition in Vizag called Music Magic. Victory in the contest hinges upon the team acing in two components namely, western and classical. Sanjay!, however, wants to win on his own terms, not realizing that in order to do that he should probably get his own contest.

Wiser heads prevail, and Pallavi, the only girl on campus who knows her SaRiGaMas from her PaDaNiSas, is put in the team, and they're all off to Vizag, where music conquers all, including attempts to make Kurt Cobain crawl out of his grave and unleash vengeance on those who dared to desecrate what he helped immortalize.

Thankfully, the music directors did not completely butcher Indian classical music. A song that shows up about 45 minutes into the movie is actually quite wonderful. Unfortunately, the equally wonderful world of rock did not get similar treatment, which is more of a pity because the local rock scene has more than a few talented people from whom to draw inspiration. In the hands of Music Magic's team, the genre ends up becoming a trashy, nonsensical, and hilariously violent caricature of its dynamic self. Rock music is basically the "Rebel" stock character which is a part of our hero's entourage.

While the movie itself looks and feels exactly like something a media student would make while aiming for the bare minimum of marks, the performances are even more effort-less (hyphenation intended), literally. Kimaya wears an expression-and-half, which range from "uncomfortable smile" to "deer-caught-in-headlights-and-about-to-be-run-over", which makes you appreciate the wonderful voice emanating from her mouth a lot less. Rahul, on the other hand, apparently does nothing in half measures, and so knocks off the extra half expression Kimaya has.

M S Narayana, Tagubothu Ramesh and other veterans in the movie should probably rethink how they want their careers to peter out.

The one person we wished we had seen more of is the girl playing Chaitu, the heroine's stock feisty best friend. Pretty in an unconventional way, the girl definitely showed more signs of life than the rest of the cast.

Oh, and lest we forget to mention it, you'll be seeing a lot of the Gemini group of channels in the movie, taking product placements to new heights â€" the hero's intro scene involves a video of Pink Floyd's "Another Brick In The Wall" playing on... yes, you guessed it... Gemini Music!

You probably haven't heard of this film. But if you have, and are hoping to learn something new about music, head straight to YouTube, and save yourself the trouble of looking for people other than yourself in the movie hall.
Share. Save. Connect.
Tweet
MUSIC MAGIC SNAPSHOT 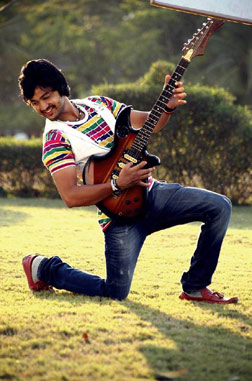 ADVERTISEMENT
This page was tagged for
music magic telugu, hyderabad
anthaku mundhu aa tharuvatha
Music Magic telugu movie
Music Magic reviews
release date
Follow @fullhyderabad
Follow fullhyd.com on
About Hyderabad
The Hyderabad Community
Improve fullhyd.com
More
Our Other Local Guides
Our other sites
© Copyright 1999-2009 LRR Technologies (Hyderabad), Pvt Ltd. All rights reserved. fullhyd, fullhyderabad, Welcome To The Neighbourhood are trademarks of LRR Technologies (Hyderabad) Pvt Ltd. The textual, graphic, audio and audiovisual material in this site is protected by copyright law. You may not copy, distribute, or use this material except as necessary for your personal, non-commercial use. Any trademarks are the properties of their respective owners. More on Hyderabad, India. Jobs in Hyderabad.