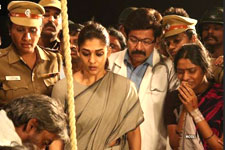 Priyanka Pulla / fullhyd.com
EDITOR RATING
3.0
Performances
Script
Music/Soundtrack
Visuals
NA
NA
NA
NA
Suggestions
Can watch again
NA
Good for kids
NA
Good for dates
NA
Wait for OTT
NA
There is certainly some credit due to Tamil movie scriptwriters because they still manage to conceptualize their story, chaise-lounging in the afternoon sun in their verandahs, rather than on their toes, drawing upon the Internet in the air-conditioned, multi-storied offices of some blockbuster factory.

So, you still get to hear new stories, idealistic, suspense-laden stories, stories that attempt to carry the movie on their shoulders rather than delegate the job to slapstick humor, dialogues, attractive cinematography or skin show.

Oh yes, Kartavyam does screw up execution big-time, but you got to hand it to the director for daring to take it up. It's an old '60s Hindi movie-ish story, which does get badly waylaid sometime around the interval. But the seed is there, and sometimes - just one idea illuminates.

Anyway, just so we are clear about it: the movie doesn't work. Not well enough to give some of its other baubled rivals, screening alongside, a run for their money. But you can actually still watch it and think of your time worthwhile.

Okay, let's see what is right about this movie. To begin with, the basic story is refreshingly new. Bhaskar (Sriram), a doctorate student at Anna University, is looking to invent a new method to desalinate seawater. And he manages it - to 98.6% purity. It does sound ridiculous when played out in the foreground of the crumbling chemistry lab sets, but the interesting thing is he tries using Quantum Chromo Dynamics, whatever that means. And since you cannot verify online if that makes any sense, they get away with a premise that cannot be questioned outright.

Next, Bhaskar marries this girl called Archana (Gopika), and they make an absolutely perfect pair. Their onscreen chemistry is one of the better ones you will see in movies these days. The film delineates this part at a leisurely pace, and both Sriram and Gopika are a treat to watch together.

Third, some of the screenplay is poetically written. Like the scene in which Bhaskar's mother, a water-carrier, is carrying him on her hip while balancing the pot on her head. She trips along the way and a few drops splash on the baby's head, who bursts into tears. This backbreaking grind his late mother had to go through everyday is what inspires Bhaskar to embrace the project. The scenes, by their clever portrayal, are touching and convincing. The movie is sprinkled with such instances throughout.

And finally, he does clever stuff when shellacking his enemy. Like putting white phosphorous on his false deal papers and leaving them in an aquarium so they will burst into flames when he pulls them out. Etc etc. Now that's a plus, too. 'Cause it's verifiable chemistry, and it's definitely more fun watching such crafty methods of fighting rather than the plain punch, clobber and thrash till there is blood oozing from the mouth.

So, there is just one fatal error with this movie. The enemy we just talked about. Madan (Prithviraj) enters the movie as the diabolical villain who pulls people down mercilessly only because he 'loves the smell of currency'. And takes on the second half of the movie. This completely purposeless detour is essentially what jerks the storyline off the smoothly running spool. And from hereon, there is unfortunately no recovery. And the movie goes back to formula since it is the only thing that can save it now.

The biggest irritation of course, for Telugu viewers, is the songs that have not been dubbed from Tamil. And that gives the feel of something you are forced to watch on a bus on your way to Pondicherry, rather than something you pay for in a theater.

That's that. A promising movie at conception, this one lost its way, either out of cowardice and delayed realization that it ought to be with the bandwagon, or simply due to a lack of knowledge of what to do with a decent plot. But all the same, it's not too bad, at least as an example of what new approaches mainstream cinema can take.
Share. Save. Connect.
Tweet
KARTHAVYAM SNAPSHOT

ADVERTISEMENT
This page was tagged for
sriram karthavyam telugu dabbing old movie
Sriram gopika movie in telugu
karthavyamtelugumovie
sriram karthavyam telugu movie
Kartavyam Telugu Phullu movie
Follow @fullhyderabad
Follow fullhyd.com on
About Hyderabad
The Hyderabad Community
Improve fullhyd.com
More
Our Other Local Guides
Our other sites
© Copyright 1999-2009 LRR Technologies (Hyderabad), Pvt Ltd. All rights reserved. fullhyd, fullhyderabad, Welcome To The Neighbourhood are trademarks of LRR Technologies (Hyderabad) Pvt Ltd. The textual, graphic, audio and audiovisual material in this site is protected by copyright law. You may not copy, distribute, or use this material except as necessary for your personal, non-commercial use. Any trademarks are the properties of their respective owners. More on Hyderabad, India. Jobs in Hyderabad.