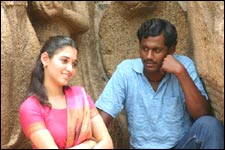 Deepa Garimella / fullhyd.com
EDITOR RATING
5.5
Performances
Script
Music/Soundtrack
Visuals
6.5
7.0
7.0
6.0
Suggestions
Can watch again
No
Good for kids
No
Good for dates
Yes
Wait to rent it
Yes
No, it is not a college-bunking, table-top-dancing, eve-teasing-adam-horsing romance of yester-years, nor the more contemporary canteen-politicking, classroom-chit-passing escapade of good-looking people who easily come to terms with their feelings. Kalasala focuses on a section of the student crowd that no film has yet really - those who have studied in government schools all their lives, who get tomato rice and biryani in real, round steel lunch boxes, and who cannot speak a word of English.

Shobhana (Tamanna), the daughter of a highly-accomplished and educated family, stands out among all the students at her college, not just because she's several shades fairer than them, but also because she's several strata ahead in terms of her upbringing. Think children of daily-wage earners, auto-drivers and drunken fathers, and you will get the idea.

Initially a stop-gap arrangement until she gets admitted to a bigger university, the small-town college overwhelms Shobhana, who's busy coping with a bigger trauma - the death of her mother. However, she is so charmed by her chappal-wearing, oily-haired, English-bumbling classmates' simplicity, that she stays put in the place.

Her gang is one that has stuck together throughout school, and among them is a matronly character, Kavita, who vehemently decides the general group consensus on male-female relationships amongst them - no falling in love, friends forever, boys shouldn't ogle at girls etc. - something that the boys find hard to agree with, but do.

And the usual formula of adolescence follows. The well-behaved, chivalrous Muthu (Akhil) starts by having a crush on Shobhana, but Kavita's severity make him retract. All is fine until some random taunt sets his emotions on in full gear. He realizes he likes her, but hates himself for it.

Meanwhile, in a completely unrelated development, Shobhana is getting advised by Kavita against getting too close to Muthu in public - giving him free rides to college on her Kinetic, for example, is just the kind of scene society loves, to start bitching about girls and boys. Shobhana agrees, but clearly, she doesn't see much point in all that. Especially when she gets to see what Muthu's home is like - it's a hut, his father and sister work in a stone quarry, and his sister doesn't go to school because they don't have the money.

Moved by his circumstances, she starts liking him. While Muthu's trying to repress his raging hormones - so that he may not 'commit the sin of falling in love' - Shobhana indulges her feelings, but only so slightly, out of fear of (Kavita's) disapproval.

Kalasala stuns you mostly because of its attention to detail, and the way it beautifully handles situations that seem like such a distant, trivial universe to the rest of the world but are so overpowering to the teenager who's in it. One of the memorable scenes is the one at the wedding of one of the group, during which Muthu can't even hear Shobhana sing without getting frustrated, and he tries to run away from it - and since it's a rich guy's wedding, they've put up speakers all over town.

However, the climax tears apart everything that the rest of the movie strived so hard for. Not only is the tragedy frustrating because of all the emotional investment you make in the rest of the film, it also seems like the makers used it to escape the actual confrontations because 'they are beyond the scope of the film'. Indeed, the real, real issues are never addressed, it is just the sorting out of teenage angst that is detailed here.

Most people who acted in Kalasala seem like they were picked right out of whatever conditions their characters were living in, and the college student crowd is particularly convincing, not to mention the lack of make-up on everyone (including Tamanna). Tamanna does a great job, and so does Akhil (who actually didn't need a lot of facial expressions).

The visuals are no National Geographic material (possibly because this is a dubbed film), but they are no DD-National either. The music is beautiful, and a couple of romantic songs make the romance seem totally palpable.

On the whole, a fantastically crafted film that bafflingly kills its own self by being a tragedy.
Share. Save. Connect.
Tweet
KALASALA SNAPSHOT

See Kalasala full details
KALASALA USER REVIEWS
1 - 2 OF 2 COMMENTS
POSITIVE  |  NEGATIVE |  NEWEST  |  OLDEST  |  MOST HELPFUL  |  LEAST HELPFUL
Nagala Kishore. on 22nd Mar 2017, 9:59pm | Permalink
I'm an Andhra who has settled in the U.S. quite a few decades ago. Rarely, indeed very rarely, do I come across a movie as heartwarming, genuine and credible as this one. It is my good fortune to have found it on youtube, quite by chance. It has none of the silliness, absurdity or violence that seems to pervade Indian cinema these days. The story, dialogue, direction, cinematography, actors in their simple rural setting, how naturally they have played their roles with simplicity and no artifice or glitz, not even makeup (as is stated in the review)--all these are very natural and together, have made a huge impression on my mind. With all my heart, I applaud the film and all the people who have made it not only beautiful but above and beyond that. It is OUTSTANDING.

A Satyajit Ray sort of film in Tamil in colour, made in our time.

ADVERTISEMENT
This page was tagged for
kalasala tamanna how they picked in that film?
kalasala telugu movie review
kalashala movie
kalasaala movie telugu review
kalasala movir story
Follow @fullhyderabad
Follow fullhyd.com on
About Hyderabad
The Hyderabad Community
Improve fullhyd.com
More
Our Other Local Guides
Our other sites
© Copyright 1999-2009 LRR Technologies (Hyderabad), Pvt Ltd. All rights reserved. fullhyd, fullhyderabad, Welcome To The Neighbourhood are trademarks of LRR Technologies (Hyderabad) Pvt Ltd. The textual, graphic, audio and audiovisual material in this site is protected by copyright law. You may not copy, distribute, or use this material except as necessary for your personal, non-commercial use. Any trademarks are the properties of their respective owners. More on Hyderabad, India. Jobs in Hyderabad.