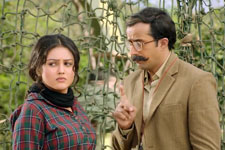 Nupur Barua / fullhyd.com
EDITOR RATING
5.0
Performances
Script
Music/Soundtrack
Visuals
5.0
4.0
5.0
6.0
Suggestions
Can watch again
No
Good for kids
No
Good for dates
Yes
Wait to rent it
No
The mystery of why Subhash Ghai rechristens his heroines with a name starting with M is finally solved. Or maybe it was solved earlier, but since he has not been in the radar for such a long time, you may have forgotten that he used to make movies. Now all he is known for is his constant grouse against the Maharashtra government wanting to reclaim the land on which he built Whistling Woods.

Back to the 'M' factor. Why 'M', you wonder - from Meenakshi to Manisha to Mahima. Well, in a recent interview, the great showman said, "M is for mother. A woman is a mother. For me M does not connote money or movie." Mother? There goes the sex appeal.

Anyway, Indrani Chakraborty has been renamed Mishti by Ghai, and has officially declared that she will use that name forever. She is the lead actress in Ghai's latest film (after his hiatus of six years), Kaanchi - The Unbreakable. She plays Kaanchi, the daughter of a martyred soldier of the Indian Army. She is feisty, foul-mouthed, spirited, and screeches when she is upset.

The inhabitants of the little hill town that she resides in, Koshamba, call her Sigdi, because she is a firmament. She spends all her time standing up to bullies and fighting for causes. She is fascinated enough by Binda (Kartik Aryan), the local fitness guy, to exchange heated words whenever she meets with him. This, of course, is love, as the two soon realise, and immediately plunge into a relationship that involves a lot of kissing. Kaanchi is happy, and worships Binda.

Then there are the Kakda brothers (Mithun Chakraborty and Rishi Kapoor), who want to disrupt life in the idyllic Koshamba, because, well, they can. As they go about their business, the elder brother's son, Sushant (Rishab Sinha), notices Kaanchi, and is wonderstruck enough to become obsessive. He will get rid of anybody or anything that stands in the way of his intended control of this curly-haired girl.

Kaanchi, of course, makes it abundantly clear that she is not interested - she is too busy opposing his father the corrupt politician and his uncle the greedy businessman. In a sudden twist, however, Kaanchi has to sit up and take notice of Sushant and his family, because they have wronged her terribly. She has to avenge her tragedy and so she lands up in Mumbai to make them pay.

The trademark Subhash Ghai is visible in the screenplay itself, but there are too many things happening to slot this into one of the conventional genres - the forbidden romance leads to betrayal that leads to a tale of revenge that morphs into an anti-corruption movement. So, yes, the story is anything but simple.

The first half takes its own sweet time to get to the betrayal bit, and in the meantime, there is plenty of running around trees, and bicycling around hills. The characters are predictably stereotypical - the hill people are peace loving and innocent, and therefore taken for a ride by the flashy, immoral city people. It is now up to Mishti to set the villains straight. Which is how, in Mumbai, she decides to join a revolution.

This leads to plenty of jingoism (a Subhash Ghai patent), with plenty of speeches to prove one's patriotism. Soon, the dialogues, the situations, the plot, the romance, and even the little humour that exists, become predictable. And the second half stretches beyond credibility to not only become repetitive, but completely detached from the first half. It suddenly seems like you are watching two different movies. What is noteworthy is the attempt made to establish the relationship between Kaanchi and her mother - it should have been explored further.

Mishti is pretty, but that is all there is to her. She is not exactly a bad actor - her fault is that she is too sincere, and gets carried away by what she perceives is her talent. She acts coy, sulks, pouts and glares with childlike intensity, but it is her screeching and wailing that wake you up. Once she gets started, she cannot seem to stop. And you can see how hard she is trying to act. This is her debut film, and she cannot be written off, really, but she may have to visit some classes (maybe at Whistling Woods) to learn how to emote, especially when she abuses (you can see that she is not comfortable doing that).

Kartik Aryan is suitable for the role of Binda, but he leaves very little impact on the audience - not his fault, really, as Mishti hogs the limelight. Mithun Chakraborty has puffed cheeks, and he is a villain in the movie. The National Award winner has definitely seen better roles, even in his B-grade movies. Rishi Kapoor can never be as menacing as he was in D-Day and the new Agneepath, but his scenes are a welcome relief from all those cloying sequences.

Adil Hussein and Chandan Roy Sanyal are underused, and deserve better characters. The surprise package is Rishab Sinha, the TV actor who became infamous for being sacked from a television show. He is perfect as Sushant.

The first half, shot in the hills, is a visual treat. Despite the surrealism in the costumes and the setting, the camera work is grand and soothing. Too much attention is paid to making Kaanchi look like a plastic figurine, and the lighting on her face is annoying, but otherwise the production design is commendable. In the second half, while the setting becomes grittier and more realistic, the cinematography and editing suffer. The music is melodious, but neither soul-enhancing nor memorable.

The only reason to watch Kaanchi - The Unbreakable is the curiosity that you may pretend you do not feel. It is no surprise that the screenplay is mixed up, and that the characters are unreal - that is what most Subhash Ghai movies are all about - but what is surprising is that Ghai is still stuck in the 1990s. Go watch it if you are feeling nostalgic, but remember, we warned you.
Share. Save. Connect.
Tweet
KAANCHI SNAPSHOT 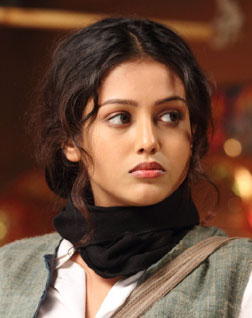 ADVERTISEMENT
This page was tagged for
Kaanchi hindi movie
Kaanchi reviews
release date
Mishti, Kartik Aaryan
theatres list
Follow @fullhyderabad
Follow fullhyd.com on
About Hyderabad
The Hyderabad Community
Improve fullhyd.com
More
Our Other Local Guides
Our other sites
© Copyright 1999-2009 LRR Technologies (Hyderabad), Pvt Ltd. All rights reserved. fullhyd, fullhyderabad, Welcome To The Neighbourhood are trademarks of LRR Technologies (Hyderabad) Pvt Ltd. The textual, graphic, audio and audiovisual material in this site is protected by copyright law. You may not copy, distribute, or use this material except as necessary for your personal, non-commercial use. Any trademarks are the properties of their respective owners. More on Hyderabad, India. Jobs in Hyderabad.