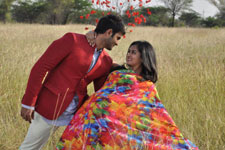 Josh / fullhyd.com
EDITOR RATING
5.5
Performances
Script
Music/Soundtrack
Visuals
7.0
6.0
6.0
4.0
Suggestions
Can watch again
No
Good for kids
Yes
Good for dates
Yes
Wait to rent it
No
Krishnamma Kalipindi Iddarini begins with an embarrassingly self-referential tone. There are a number of Mahesh Babu cutouts, and the hero and his friends, as children in the flashback, are shown bunking school to watch Krishna's "Number One". Apart from the references to hero Sudheer Babu's family, the movie also refers to itself with one of the hero's buddies, now a film director, making his debut with a movie titled 'Krishnamma Kalipindi Iddarini'. He claims it is based on the story of his friends, and starts narrating it in the press meet. There is also needless self-congratulating with the reporters saying things like "It is a heart touching story".

The film doesn't need this. If it were a pot-boiling commercial venture we'd get the invoking of more illustrious members of the hero's family. But this is a grounded love story with its heart in the right place. Why fish for whistles when the story doesn't expect any? We understand that the director (R Chandru, also the director of Kannada original "Charminar") is attached to his movie, but going meta with the self-reference serves no purpose. Importantly, when it comes to congratulations and praise, that will have to come from the audiences.

Fact is, Krishnamma... indeed has a good story. It is a tale we don't often see in Telugu cinema - that of a man negotiating between love and other aspects of life although the love means a lot to him. Krishna (Sudheer Babu) attempts to express his feelings to childhood friend Radha (Nandhini) several times, and is thwarted each time. Education, family, circumstances and responsibilities all come in his way of his letting Radha know what he feels for her. The story traces Krishna's evolution from a disinterested dull student to a successful professional all the while nurturing the mellowness of first love.

Although narrated with flashbacks, the story progresses chronologically, starting from Krishna and Radha being kids in school to adolescents in junior college to full-grown adults towards the end. All of their interactions are very age-appropriate, and what strikes you most is the reality of it all. The friendship isn't oversold. You can sense the affection they have for each other from their actions. Without them having to mouth punchlines on the value of friendship. Similarly you can understand why the leads take the decisions they take. The decisions are informed by their circumstances, and their motivations practically never seem forced.

Another gratifying feature of the movie is the way in which the supporting characters are written and enacted. Krishna's parents and Radha's widowed mother are especially well-written, with notable depth. You are given sufficient insight into how indifferent Krishna's father is towards his (Krishna's) education just as much as you understand his mother's passionate attachment to her son's future. Also, Pragathi gives a layered performance as the despicable, scheming, yet fully believable character of Radha's parent.

Raghubabu is present for exactly one scene where the kindness he portrays makes you wish he wasn't stereotyped as the comedic villain in our movies. Posani is given unclear characterisation, and he spends his time being confused over whether to enact his role with dignity or play a buffoon. Wherever he is clear, though, he shines.

Despite this sensitivity in writing and acting, the film fails sadly in the direction department. Do not mistake us - Chandru is rather successful in terms of evoking the right emotions from us. His failing is in the details. The key scenes are done right, but the rest are executed in an alarmingly generic manner. It feels like Chandru expended all his creative energy in what he thinks are the important parts of the film, and everything else was taken care of by an inexperienced assistant. This brings down the overall experience of the movie.

Silly humour and pointless fights are shoehorned into the main narrative to the point of being jarring. There is absolutely no work in these sections that is worth talking about. We aren't saying that love stories shouldn't have comedy or fights or item numbers - our commercial cinema has enough bandwidth for all these and more. But they need to be treated with the same seriousness as the rest of the movie. It is frustrating to be appreciating a scene only to be let down in the next two.

The music is consistently good - the songs all have an intrinsic melody to them, and aren't treated as fillers.

Since the story is told from Krishna's vantage point, Radha is absent for long stretches in the film. Even when she does appear, you aren't given any insight into the workings of her mind. So Nandhini has little to do apart from looking her part. She does suit the role, and is also very pleasant to look at. However it is Sudheer Babu's performance which commands attention. He is at a steep point in his learning curve, and you can see there is a good actor lurking in him. But he seems to be holding it back for reasons best known to him.

Krishnamma Kalipindi Iddarini is a sensitive and almost endearing love story. But the lethargic treatment makes you wary. A good artist details the background just as well as he shades the nose ring of the pretty woman. Imagine drawing your muse with oil on canvas and then letting your 4-year-old nephew doodle around it. The muse deserves better, no?
Share. Save. Connect.
Tweet
KRISHNAMMA KALIPINDI IDDARINI SNAPSHOT 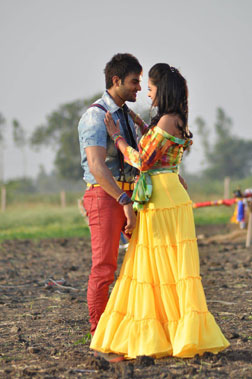