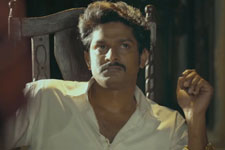 Swaroop Thotada / fullhyd.com
EDITOR RATING
4.0
Performances
Script
Music/Soundtrack
Visuals
6.0
3.0
5.0
6.0
Suggestions
Can watch again
No
Good for kids
No
Good for dates
No
Wait to rent it
Yes
It's no big secret that Ram Gopal Varma is the high priest at the altar of violence where men beyond and beneath the law are worshipped as heroes. In his heyday when he reserved himself as an observer and analyst, sending deep probes into the psyches of his characters, we got films like Satya and Company. And then he decided to promote (or demote) himself to being an unabashed adorer of these larger-than-life characters and stories, perhaps because it gives him a more direct license to revel in and obsess about gore and masochism, and we get these loud and blood-soaked B-movies.

Vangaveeti Radha (Sandeep Kumar) is a small time yet fearless rowdy who is initially an ally of Chalasani Venkataratnam (Vamsi Nakkanti) but falls out with the latter in a clash of egos. He later brutally murders Venkataratnam to assume his place as the kingpin of the city. Gandhi (Kautilya) and Nehru (Shritej) join Radha and emerge as his most loyal supporters and allies. Later Radha gets gruesomely murdered by enemies from his past, and his brother Ranga is pushed to the forefront as a leader. In the constantly changing political environment of the city, all the lives of these men take blood-soaked turns.

Based on the Vijayawada incidents of the 1980s, Vangaveeti surprises you with no bigger revelations than what you get with a simple Google search. Those who watch it for the inside secrets are in for nothing but sore disappointment. The film is just a blatant account of the gruesome killings that it is centred around, but is too diplomatic to have a point of view, and pretends to let you have your own.

But you cannot have one either, as even after sitting through the entire film, you do not learn anything about them as people. You are not provided with any insights into what drives their lust for power, what inures their conscience to murder and ravage, and what just what makes one wield a sword in a civilized society.

Instead you are served up glorifying slow-motion shots of the central characters, sadistically detailed depiction of gore, nauseatingly weird close-ups and camera movements that are devoid of any style or sense, all sewn together with a sarcastic voiceover by the director himself. You cannot help but wonder whether all the out-of-place campiness is an intentional tongue-in-cheek experiment by Varma, who we know is not averse to such feats. The deliberate laid-back style narration he employs boosts your suspicions.

In one scene in the beginning, you get to see in a tight close-up the itchy armpits of a character who scratches it violently and asks for Zalim Lotion. This scene can scare you more than all the blood and gore put together in the film, if you count the number of characters in the film and multiply that by two to find out the number of armpits you might get to visit. Thankfully Varma refrains from that in the rest of the film.

On a serious note, what plagues this film primarily is the lack of flesh and blood. Of course plenty of that is spilled and tossed around, but none of that sits in a character to make it relatable. We see people getting killed, turning criminal, crossing lines and betraying trust, but it all feels documentary. The film is too occupied with cramming in all the key events to leave any room for any human element. That's why the characters appear more as pawns in a game of fate rather than the vulnerable characters motivated by power, greed and revenge which they are.

Sandeep Kumar as Vangaveeti Ranga is believable, and aptly underplays the character. The rest of the actors too give credible performances, but the poor writing doesn't let anyone shine. The songs are an absolute laughing stock. Those that play in the background are sung by Varma himself, and distract you into goofiness. The others, one for the "heroine entrance" and one a marriage number, are shot so ineptly that you wonder whether they are deliberate spoofs or attempts to make up for the lack of humour in the film.

Vangaveeti might cater to people who go with very low expectations, but Ranga fans will be more than disappointed. They might even be outraged at all the political correctness and the lines that Varma didn't cross.
Share. Save. Connect.
Tweet
VANGAVEETI SNAPSHOT 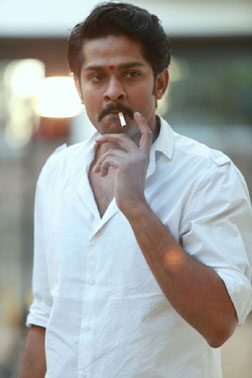 ADVERTISEMENT
This page was tagged for
Vangaveeti telugu movie
Vangaveeti reviews
release date
Sandeep Kumar, Vamsi Nakkanti
theatres list
Follow @fullhyderabad
Follow fullhyd.com on
About Hyderabad
The Hyderabad Community
Improve fullhyd.com
More
Our Other Local Guides
Our other sites
© Copyright 1999-2009 LRR Technologies (Hyderabad), Pvt Ltd. All rights reserved. fullhyd, fullhyderabad, Welcome To The Neighbourhood are trademarks of LRR Technologies (Hyderabad) Pvt Ltd. The textual, graphic, audio and audiovisual material in this site is protected by copyright law. You may not copy, distribute, or use this material except as necessary for your personal, non-commercial use. Any trademarks are the properties of their respective owners. More on Hyderabad, India. Jobs in Hyderabad.