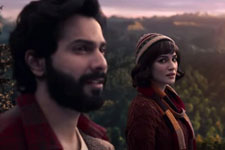 Sai Tulasi Neppali / fullhyd.com
EDITOR RATING
8.0
Performances
Script
Music/Soundtrack
Visuals
8.0
8.0
8.0
8.0
Suggestions
Can watch again
Yes
Good for kids
Yes
Good for dates
Yes
Wait for OTT
No
Being a werewolf has a bit of a learning curve, as a freshly-mutated Bhasker finds. His body can switch between his human and feral form, but he forgets that his chaddis can only withstand the trip one way, as they rip open and a furry tail blooms out his rear. After spending nights hunting in the jungle as a wolf, he wakes back up as Bhasker, dazed and drenched in blood. Mowgli's theme song "Jungle Jungle baat chali hai..." plays in the background as Bhasker takes the werewolf walk of shame back to his house, half-naked in his tattered pair of cartoon-print undies.

Showrunner Amar Kaushik's wicked sense of humour is on full blast in this creature-comedy about a guy who gets bit in the bum by a werewolf and turns into one himself. Before Bhasker (Varun Dhawan) becomes a bhediya, he is just another city-bred dude with a chip on his shoulder. His employer has sent him to Ziro, a remote village in the jungles of Arunachal Pradesh, to oversee a road construction project. He arrives there with his cousin JD (Abhishek Banerjee) in tow, and with the help of a local friend, Jomin, and a liaison, Panda, he tries to convince the villagers to sign off on the project, giving them the usual spiel about bringing development - malls, theatres, airports - to their doorsteps. In reality, building the road will be an ecological disaster, razing down large tracts of virgin forest and displacing the locals.

Just as his project starts to take off, Bhasker is bit and "infected". He rushes to local vet Anika (Kriti Sanon) for treatment, but it's no use. Bhasker turns Wolverine-ish, acquiring superhuman strength and a heightened sense of taste and smell. These upgrades come with a terrifying catch, though: on full-moon nights he turns into a beast and goes on a rampage, killing off contractors crucial to his road campaign. His wolf avatar can't be tamed. It only responds to Himesh Reshamiyya's howling noises ("suroo...oor").

As you can tell, Bhediya's story shapeshifts between rib-tickling comedy and heartfelt drama. Between scenes about poop and vomit, it builds a case for preserving our forests and respecting northeast culture. It helps that nobody is giving dull lectures about deforestation - the visuals do all the talking. You can almost smell Ziro's clean air and feel the lush texture of its jungles. Birds and animals are brought to life with hyper-realistic graphics. The rendering of the wolf is *chef's kiss* and reason enough to watch the movie in 3D.

Bhediya's cast is strikingly good. Varun Dhawan puts on a mesmerizing show as he morphs into the wolf, retching and convulsing in a completely unrestrained way. For Dhawan's sidekick, Amar pulled in Abhishek Banerjee to reprise his role as JD, the epileptic dimwit, from his horror movie Stree. Paalin Kabak plays Jomin. Together these two keep the laugh track alive in the theatre with their nonstop banter.

Kriti Sanon shows a surprising knack for humour as the indecisive doctor Anika. Her look - short bob and pilling sweaters - cuts her natural sex appeal in half, which plays perfectly into her role. The secret sauce of the casting, though, is Deepak Dobriyal, who plays a shifty local guy called Panda with uncanny ability.

Unless you went looking for an emotional drama about saving nature, you'd need a really big magnifying glass to find faults with Bhediya. It's good fun - even a howling riot at times. It is almost as fanciful and starry-eyed as a children's storybook. And it leaves you in a jolly good mood. What more can we ask of cinema? 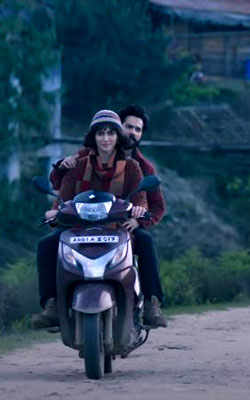 ADVERTISEMENT
This page was tagged for
Bhediya hindi movie
Bhediya reviews
release date
Varun Dhawan, Kriti Sanon
theatres list
Follow @fullhyderabad
Follow fullhyd.com on
About Hyderabad
The Hyderabad Community
Improve fullhyd.com
More
Our Other Local Guides
Our other sites
© Copyright 1999-2009 LRR Technologies (Hyderabad), Pvt Ltd. All rights reserved. fullhyd, fullhyderabad, Welcome To The Neighbourhood are trademarks of LRR Technologies (Hyderabad) Pvt Ltd. The textual, graphic, audio and audiovisual material in this site is protected by copyright law. You may not copy, distribute, or use this material except as necessary for your personal, non-commercial use. Any trademarks are the properties of their respective owners. More on Hyderabad, India. Jobs in Hyderabad.