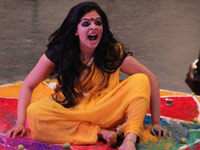 Ravi Kandala / fullhyd.com
EDITOR RATING
2.0
Performances
Script
Music/Soundtrack
Visuals
2.0
2.0
1.0
4.0
Suggestions
Can watch again
No
Good for kids
No
Good for dates
No
Wait to rent it
No
Sometimes, less is more. When it comes to horror films, less is more all the time. The less you show of your ghost, the better. People are more likely to be scared when they hear a small noise after a tense silence than by seeing a woman screaming her lungs out with too much kajal beneath the eyes. And whoever made Chandrika had no understanding of this little nuance.

Chandrika is an abomination of a movie. No one in the unit seems to have had a clue about what they were doing. The film starts with Arjun (Karthik Jayaram aka hunk who likes to take off his shirt), who's a poet and a painter, taking his wife Shilpa (Srimukhi) to a haveli that he's purchased recently. The haveli apparently belonged to his guruji. Arjun plans to convert it into an art gallery, but Shilpa insists that they live there.

Soon, strange things start happening, and Shilpa is possessed about half an hour into the film. It still takes Arjun all of the first half to realise that, though. The second half begins with a random Swamiji walking into the haveli, interviewing the possessed Shilpa and finding out that her name is Chandrika. Arjun acts surprised, and you are, too - the interval block is an elaborate sequence with the possessed Shilpa calling herself Chandrika - did Arjun miss that?

The connection between Arjun and Chandrika (Kamna Jethmalani), and the reason why she comes back to possess Shilpa form the second half of Chandrika.

Chandrika makes no pretenses at all - it is a plot inspired by Chandramukhi and a thousand other such films that have been released in the recent past. And you can make decent movies with that plot. What kills Chandrika is the poetic aspirations of its director. The flashback portion of the film consists of a sequence where Arjun and Chandrika talk to each other in lyrical phrases. The sequence stretches for so long that the audience starts to scream with impatience. This is followed by a "hot" song with Kamna Jethmalani trying her best to showcase some sexy expressions by contorting her face.

The horror part of the movie is terrible. It mostly involves Srimukhi dressing up exactly like Jyothika in Chandramukhi and screaming her lungs out. Far from scaring people, it only ends up eliciting laughs. The poetry is terrible considering that this one was simultaneously made in Kannada, too. The narration of the film is quite confusing, too.

The actors are all wooden, and you wonder what forced an actor like Girish Karnad to be part of this drivel. The leads have zero chemistry and sub-zero acting skills. The supporting cast consists of unknown actors who overact. The only known face is that of L B Sriram - he has four scenes and two lines, which are dubbed for by someone else.

Chandrika is an absolute waste of resources for everyone involved in it. An evening spent watching cement dry would be better spent compared to this.
Share. Save. Connect.
Tweet
CHANDRIKA SNAPSHOT 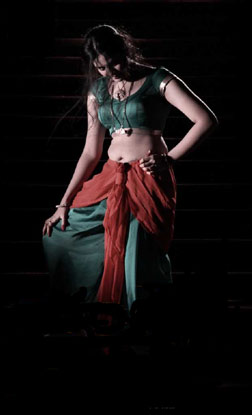 ADVERTISEMENT
This page was tagged for
Chandrika telugu movie
Chandrika reviews
release date
Kamna Jethmalani, Srimukhi
theatres list
Follow @fullhyderabad
Follow fullhyd.com on
About Hyderabad
The Hyderabad Community
Improve fullhyd.com
More
Our Other Local Guides
Our other sites
© Copyright 1999-2009 LRR Technologies (Hyderabad), Pvt Ltd. All rights reserved. fullhyd, fullhyderabad, Welcome To The Neighbourhood are trademarks of LRR Technologies (Hyderabad) Pvt Ltd. The textual, graphic, audio and audiovisual material in this site is protected by copyright law. You may not copy, distribute, or use this material except as necessary for your personal, non-commercial use. Any trademarks are the properties of their respective owners. More on Hyderabad, India. Jobs in Hyderabad.