Holiday - A Soldier Is Never Off Duty Review 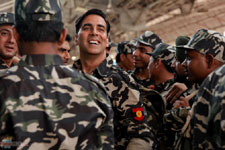 Nupur Barua / fullhyd.com
EDITOR RATING
6.0
Performances
Script
Music/Soundtrack
Visuals
6.0
5.0
6.0
7.0
Suggestions
Can watch again
Yes
Good for kids
No
Good for dates
Yes
Wait for OTT
No
We bet you did not know from watching the trailers (or you did not notice) that the title of the Akshay Kumar movie that releases this weekend has a caption. The full title is Holiday - A Soldier Is Never Off Duty. Suddenly, a whole range of thoughts strikes you. Firstly, usurping Sunny Deol as the only true-blue action patriot is a task by itself, even for Akshay Kumar. Secondly, nobody has really delved seriously into the patriotism genre ever since Deol became a hit with the masses. And thirdly, caption or not, it is hard to believe that a remake of a Tamil movie will be anything but pure masala fare, especially when it stars Akshay Kumar.

Akshay Kumar plays a soldier named Virat Bakshi, and is home for a holiday. His overenthusiastic and proud family immediately whisks him off to "see" Sahiba (Sonakshi Sinha), because they want him married and settled. The dutiful son does go along, but remains unimpressed by the girl. He wants somebody with more fire, more spunk.

After rejecting the idea of marriage, at least for the time being, Virat settles down to enjoy the rest of his vacation. However, he has a problem - he cannot switch off and become a civilian even then. Always alert, thanks to his training in the army, and inherently conscientious, he finds himself in the middle of what seems to be a serious conspiracy to destroy the nation.

It all begins with a bomb blast, and suddenly, Virat blood boils enough to take matters into his own hands - well, almost. He decides to try his own methods of interrogation with suspects. He is a secret agent, and does some elaborate spadework and planning to ensure that the sleeper cells that threaten the city and the country are eliminated as soon as possible.

What he does not account for is the suave villain (Freddy Daruwala), who always seems to be one step ahead of him. In the meantime, Virat discovers that Sahiba is not so dull after all. To make things better, she is a boxer. He falls in love, and romances her, but his primary duty is to his country, of course.

A R Murugadoss' original, the Tamil Thuppakki (also dubbed into Telugu), was a big hit. And that was reason enough to remake it in Hindi, of course. However, while the English caption of that movie was, quite aptly, "The Gun", and its promos gave no reason to believe it was anything breezy, the Hindi version's trailers (actually, the songs that have been playing on every possible medium for a while now) give you the impression that it is a light-hearted masala film.

Of course, that is true, but there is more to the film than meets the eye. While it is predictable, and follows the age-old good-versus-evil narrative (and you know who wins), Holiday is more than that. It shines because it takes a serious issue and inserts a whole lot of song and dance and colour to make it wholesome entertainment, while yet not turning a "leave your brains behind" kind of movie, because it rakes up a few issues that we need to be aware of.

The first of these is the existence of the ordinary soldier in our army. Just how much he sacrifices so that we can be safe is mentioned enough number of times for you to really, honestly, appreciate him (and not just offer an obligatory admiration). The script overdoes the praise, and throws it in your face a little too many times, but the makers have a point there - a soldier is actually never off duty. He does not have the luxury of putting his feet up and procrastinating.

The second is the real threat we are subjected to in this country (and in the world) - the cold-blooded terrorist. Although the word has many connotations and we have seen all kinds over the past decades, "terrorist" these days means a person with a certain level of ruthlessness. Nobody is actually safe, and no disaster can be predicted - the bus you take to work every day may just explode, for example - and that makes the issue not only relevant to the present, but also scary. It jolts you out of the complacency that you have decided to settle for.

Where the screenplay fails is in logical writing. You may argue that a masala film need not have any, but the dichotomy in the genre of this particular movie makes you wonder if there was something that could have been done better. Without getting into the specifics, let's just leave it at that you should not expect too much in the writing department.

The romantic angle is unnecessary, really, and quite tedious. Also, some of the monologues reek of self-righteousness, but the entertainment factor is first rate. The other grouse you may have with the film is the villain. He is not compelling enough for you to invest in his character, and neither does he distract from the hero.

That may be a result of the fact that this is a film made for Akshay Kumar, and sometimes you get the impression that he is the only character on screen. This is his moment in the sun, and although he does nothing that you have not seen before, your eyes will be riveted on his face, and his actions, of course. Only, he still cannot distract you from the flaws (and there are quite a few) in the screenplay.

A special mention must be made of Freddy Daruwala, only because he just cannot match the intensity of the protagonist. He comes across as a sulking child who needs to be spanked. In the Tamil original, the villain was Vidyut Jamwal, who may not be known for his acting skills, but was menacing enough. As for Sonakshi Sinha, the less said the better. She is a prop, really, and goes OTT with her aggressive-young-woman act. The other actors are inconsequential, and Sumeet Raghavan is sadly underused.

For a movie that deals with something as serious as terrorism, Holiday has oodles of colour and brightness. Each sequence screams "happy", unless, of course, it involves a bomb blast or unfriendly terrorists. The sets and costumes are loud and vibrant, and they make you forget that the movie deals with dangers that are real and relevant.

The songs, courtesy Pritam, are catchy, but they will soon be forgotten. There is nothing that really catches your fancy. The cinematographer, as is usual with most of their ilk these days, goes crazy with the action sequences (again, this is an Akshay Kumar film!). The rest of the movie, as far as visuals are concerned, is not too bad either.

Holiday is a rather lengthy movie - running almost 3 hours - but the editor has done a good job. You are never bored - except maybe when Akshay Kumar and gang get all holier-than-thou.

Holiday is a masala entertainer with a message, and definitely worth a watch. However, if you want the real deal (besides Akshay Kumar), we suggest you watch Thuppakki - it has a better screenplay, to begin with.
Share. Save. Connect.
Tweet
HOLIDAY - A SOLDIER... SNAPSHOT
HOLIDAY - A SOLDIER IS NEVER OFF DUTY SNAPSHOT 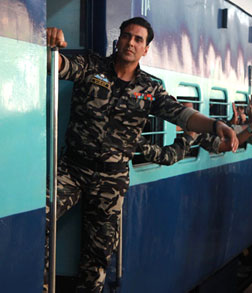