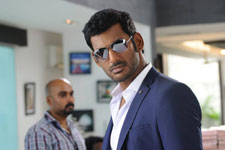 Ajay Kumar R / fullhyd.com
EDITOR RATING
3.0
Performances
Script
Music/Soundtrack
Visuals
5.0
2.0
3.0
4.0
Suggestions
Can watch again
No
Good for kids
No
Good for dates
No
Wait for OTT
No
Serving social messages to fans is not an obligation for a filmmaker, especially when it has to be squashed into the last few minutes of the movie's runtime, two hours of which are already inane to say the least. But director Suraj does exactly that, and makes his message look forced. The good news is, that's not the worst part of Okkadochhadu. Wait, that's bad news. Whatever - it's hard to be clear at reasoning after watching this one.

Arjun (Vishal) comes to Vizag in search of a job, and starts living with a bunch of crooks and fools (one of them played by Tamil cinema comedian Soori) - or so the movie leads you to believe. And out of nowhere, he falls in love with Divya (Tamannaah), the sister of DCP Chandrabose (Jagapathi Babu). Using every possible trick in the book, and through a whole hour of embarrassing roleplay, Arjun manages (to the nonplussed audience's amusement) to win her heart and her brother's respect.

But Arjun is more than what meets the eye, as he keeps changing garbs in a series of painstaking twists. And he does all this to net a big fish - a corrupt minister who feels unobligated towards his constituents. Disguised once as a CBI officer, Arjun also nails Chandrabose and seizes nearly Rs. 300 crores from his possession. But as said earlier, Arjun isn't what he seems. And the next thing you know, the "CBI officer" is far away from home with crores of rupees in the "CBI truck".

But the metaphorical clothes soon get tight around his waist. The hero's true identity, and how the dots involving the minister, the DCP and Arjun connect, establish the crux of the story.

The film has way too many loopholes. A smart and witty young man cooks up a rather bizarre and moronic technique to win a girl's trust (watch it for yourself). Once again our films make you forget that you might as well walk up to her and say "hello". What is more illogical is that earning her love is given a good one hour of screentime, and comedian Vadivelu's "comedy" takes up another forty minutes. This time could have been spent on character and plot development instead. The unreasonable twists and turns again while away the time. And what you are left with are around 15-20 minutes of the hero's true motives and backstory, which seem to add value to the forced message.

Vishal emotes well, but the role and the movie do not befit his skills as they seem to turn him, inconsistently, into a goofball at times and serious at others, which can be quite confusing for the viewer. But that could be a problem only with the editing. Vadivelu's comedy just doesn't work, at least not in this dubbed version. However he does make you laugh once or twice, and helps you tolerate the crumbling film. Something tells us that Vadivelu would have been better at playing Arjun than Vishal, given that it might take a comic to pull off such a ridiculously written character.

Tamannaah looks disinterested in her role (if there is any). Tarun Arora, who plays Deva, the secondary antagonist, emotes well in certain places. You might recall him as Anshuman from Jab We Met. Jagapathi Babu, although a reputed actor, doesn't quite make the cut here. That is again probably due to the role he is given. None of the character arcs receives actual development, and that probably is the reason otherwise talented artistes are inconsistent throughout.

Richard M Nathan's cinematics don't render any unique value to the film, but visuals are perhaps not as important for a movie of this genre. Hiphop Tamizha's songs and soundtrack are trite and unimpressive. The Telugu translation (this is a Tamil film) seems to lower the impact of the comedy track and song lyrics which, the writer hears, make more sense in the Tamil version.

Okkadochadu could have made more sense had it begun with the hero's backstory as the premise, and is a special case of directorial disasters. It may appeal to only the masses, and that, too, only to those that do not mind a bad script and immature flirting tips.
Share. Save. Connect.
Tweet
OKKADOCHADU SNAPSHOT 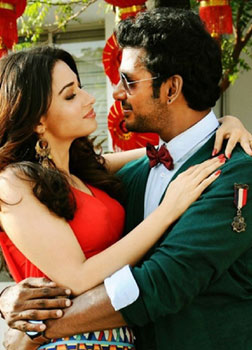 ADVERTISEMENT
This page was tagged for
okkadochadu telugu full movie
okkadochadu full movie
Okkadochadu telugu movie
Okkadochadu reviews
release date
Follow @fullhyderabad
Follow fullhyd.com on
About Hyderabad
The Hyderabad Community
Improve fullhyd.com
More
Our Other Local Guides
Our other sites
© Copyright 1999-2009 LRR Technologies (Hyderabad), Pvt Ltd. All rights reserved. fullhyd, fullhyderabad, Welcome To The Neighbourhood are trademarks of LRR Technologies (Hyderabad) Pvt Ltd. The textual, graphic, audio and audiovisual material in this site is protected by copyright law. You may not copy, distribute, or use this material except as necessary for your personal, non-commercial use. Any trademarks are the properties of their respective owners. More on Hyderabad, India. Jobs in Hyderabad.