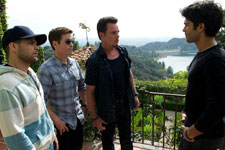 Nupur Barua / fullhyd.com
EDITOR RATING
5.0
Performances
Script
Music/Soundtrack
Visuals
6.0
4.0
5.0
5.0
Suggestions
Can watch again
No
Good for kids
No
Good for dates
Yes
Wait for OTT
Yes
A television series becomes popular, most analysts and sociologists think, because we let strangers into our bedrooms (or living rooms). We know the characters intimately, even as we put our legs up on the coffee table and immerse our senses into the highs and lows of their daily lives. The fourth wall disappears, and we discuss, with other fans of the series, these fictitious beings and their actions. We even take sides, as we would for friends and family.

Now take these characters and put them in a movie, and it all becomes impersonal, immediately. Case in point - the Sex And The City movies, or Khichdi The Movie. What Doug Ellin wanted to do with a movie sequel to the cult series, Entourage, is clear. Anybody who has watched even one season of the series will buy a ticket to the movie, without blinking. What is disappointing is the obsoletion in the premise of the entire movie.

First, however, the story. It begins where the series finished. Vince (Adrian Grenier) wants to direct a movie, and specifically the one that Ari Gold (Jeremy Piven), his former agent, has offered him the lead role in. Ari is now a studio head, and he somehow pulls enough strings to give Vince his directorial debut, titled Hyde. Vince's brother, Drama (Kevin Dillon), also has a substantial role in the movie, and everything seems to be going pretty well.

And then Vince manages to go over-budget, and it is up to Ari to arrange for more money. He goes to his co-investors, Larsen (Billy Bob Thornton) and his son Travis (Haley Joel Osment), and the latter decides to get some hands-on experience in the post-production of the movie. He is bad news, as Vince and his entourage soon discover, and tries his best to sabotage the completion of Vince's ultimate work of art. Travis also manages to make life hell for Ari.

All of them eventually figure out how to take care of Travis, but before that, they have to deal with more important matters, such as the pregnancy of the ex-girlfriend of E (Kevin Connolly), the broken arm of Turtle (Jerry Ferrara), Ari's marriage (always in trouble), Vince's broken marriage, and Drama's, well, drama.

If you had to watch a random bromance sequence from the movie, and compare it with any scene from any episode from any season of the series, you would not be able to distinguish one from the other. Except that the characters look much older than they did almost a decade ago, which is why their inappropriate behaviour is more pronounced in the movie. All that the boys seem to do is hang out with skimpily-clad women in various parties. They have nothing important to say, or prove. Their relationships are shallow, and monotonous. Their character graphs are non-existent. Their character highlights revolve around sex and number of women. And you would not want any of them to be your friend.

Then you have the women. Why, pray tell, would these extremely talented and accomplished characters become such caricatures that hover dangerously on misogynous stereotypes? They are irritating, and contribute nothing to the lives of these of men. And oh yes, they are easily disposable, too.

There is no story, really. Doug Ellin seems to have put together the fantasies of a few men he may have interacted with, and presents this movie as a culmination of every kind of wishful thinking he has been privy to. The narrative is pretty self-indulgent and lacks intensity. To hammer in the fact that this is a movie by, for, and of Hollywood, he decides to authenticate the setting with at least 50 cameos of well-known actors playing themselves, including Jessica Alba, Jon Favreau, Chad Lowe, Liam Neeson and, of course, Mark Wahlberg (for the uninitiated, the series is based on Mark Wahlberg's experiences as a struggler in Hollywood). Ronda Rousey's fight with Turtle is the only plot point in which a cameo is justified - the rest are placed haphazardly, to help you get distracted from the rather amateurish screenplay, or so it seems.

All the actors look tired, so it comes as quite a surprise that all of them, with the exception of Jeremy Piven, are very enthusiastic about a possible sequel. Piven is not to be blamed for his relatively lacklustre performance. Not only has the most popular character of the series been side-lined, but he has also gone on record to say that Ari Gold is not somebody who inspires him. Despite that, he steals the limelight in the movie, because the others - Adrian Grenier (jaded), Jerry Ferrara (lost), Kevin Dillon (confused) and Kevin Connolly (over-confident) - are pretty mechanical in the depiction of their much-loved characters.

The only one who can give Piven some competition is Haley Joel Osment (best known for his ability to see dead people). We wish we could have seen more of Rex Lee, and also better roles for Rhys Coiro, Perrey Reeves, Constance Zimmer and Emmanuelle Chriqui.

Entourage, the movie, does not offer anything new in terms of styling or storytelling. It is a pale imitation (quite wannabe) of the series, even in its cinematography and music. The only positive you come away with from this movie is its editing - you never get bored, even when the going becomes really tedious in terms of story - the pace is commendable, and crisp.

It might be better to revisit the series - it may not be relevant to the present times, but was at least entertaining. Or wait for the DVD of the movie, because watching it on the big screen only makes you dislike these characters that you have adored for almost a decade. After all, not every television series translates into a good movie, especially when the movie is a continuation of the series.
Share. Save. Connect.
Tweet
ENTOURAGE SNAPSHOT 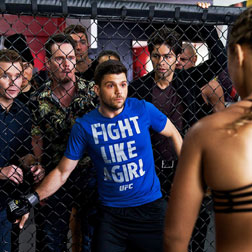 ADVERTISEMENT
This page was tagged for
Entourage english movie
Entourage reviews
release date
Kevin Connolly, Adrian Grenier
theatres list
Follow @fullhyderabad
Follow fullhyd.com on
About Hyderabad
The Hyderabad Community
Improve fullhyd.com
More
Our Other Local Guides
Our other sites
© Copyright 1999-2009 LRR Technologies (Hyderabad), Pvt Ltd. All rights reserved. fullhyd, fullhyderabad, Welcome To The Neighbourhood are trademarks of LRR Technologies (Hyderabad) Pvt Ltd. The textual, graphic, audio and audiovisual material in this site is protected by copyright law. You may not copy, distribute, or use this material except as necessary for your personal, non-commercial use. Any trademarks are the properties of their respective owners. More on Hyderabad, India. Jobs in Hyderabad.